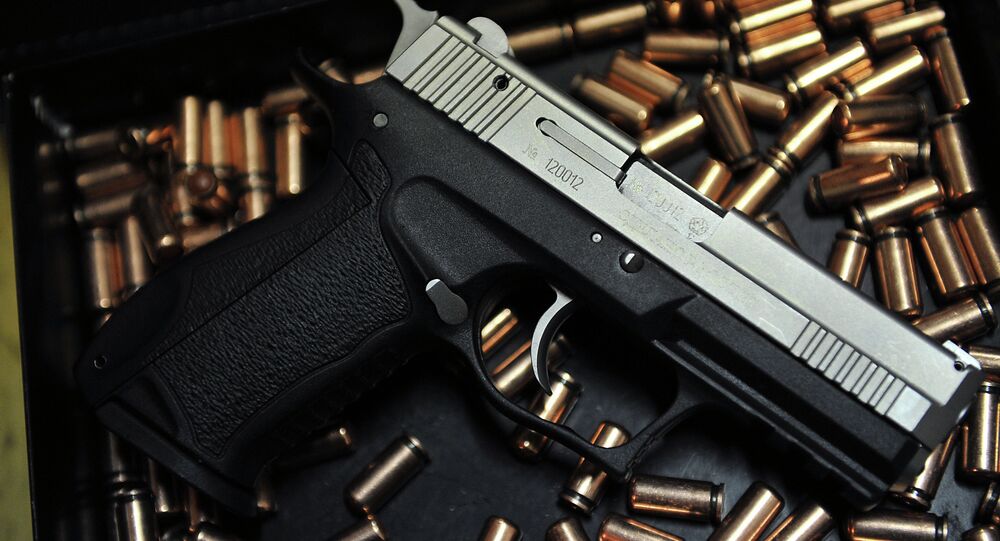 Official figures have revealed that New York City experienced a worrying rise in crime during the first eight months of the pandemic. The figures for New York show a 63% increase in shooting incidents inside or in front of corner shops, as well as a 222% rise in burglaries, and a 10% spike in robberies.

The surge in shootings isn’t exclusive to New York either, with the American Gun Violence Archive recording some 578 mass shootings nationally between the start of 2020 and 26 November 2020. Professor Craig Jackson, professor of occupational health psychology at Birmingham City University, has outlined his views on the reasons for the problem.

Sputnik: What do the statistics tell us about mass shootings in the US over 2020? For example, have we seen these numbers rise or fall?

Craig Jackson: First off, we have to understand what we mean by mass shootings. There are different ways of categorising what is a mass shooting, because there's no legal definition, but one of the ways is by a service called the Gun Violence Archive, and essentially to them, a mass shooting is if you have four people who are injured, either fatally or not - excluding any shooter being injured - and that can be related to criminal activity, disputes, gangs, or drug activity. So, that's a very loose way of measuring mass shooting; there are more conservative ways that insist on four fatalities or three fatalities not related to crime. So, the Gun Violence Archive is the loosest measure, shall we say, of mass shootings, but when you use those statistics, just in 2020 alone, by August we'd reached 578 mass shooting incidents. Last year, the whole of 2019, there was just 417. So we're already seeing a massive increase. Now, there's usually a general increase, year on year mass shootings are slowly increasing - but this has leapt up from 417 to what will ultimately be about 600 mass shootings by the end of the year - if not more.

Sputnik: Why have we seen such an increase in mass shootings? What are the key factors responsible for this surge in gun violence?

Craig Jackson: There are a number of reasons behind why we think mass shootings have increased. Now, there is a very straightforward relationship that's been proven by research: the more guns you have in society, the more mass shootings you will have. It's more complex than just saying guns equals mass shootings, but that statistic, that correlation, is there. Even when you adjust for background levels of criminality or violent criminals in society, you tend to find even on a state-by-state basis, that the more guns you have, the more mass shootings you will have. Now, what we have seen in the US is a massive increase in gun sales this year. Again, by August alone, sales of firearms in the USA overall went up by 60%.

Facebook/Courtesy of Takelia Shanee
'Back the F**k Up': US Woman Pulls Gun on Black Family Following Heated Exchange - Video
So, we obviously have more guns in society than ever before and that's going to result in more mass shootings. There'll also be some complicated fallouts about that, because many of the people who've bought these guns, and this so far equates to about two million firearms sold in the US up to August this year, many of the people who own those guns will eventually get rid of them or sell them on through antique fairs or through garage sales. And when you sell a firearm and you're not doing it for your livelihood or profit, you don't need to have a background check of the purchaser, and that will mean that further down the line more guns will get into the hands of people who shouldn't have guns and who would not be able to get those guns if background checks were undertaken. So, it's a big problem now, but it's causing an even bigger problem further down the line.

Craig Jackson: It's a very complicated area, and it isn't just as simple as more guns equal more deaths, and I can give you a very good example. In 1994, assault rifles, AR-15s, that kind of firepower... In 1994, in the US, they were outlawed because there'd been a mass shooting in California and the Clinton administration banned the sale of AR-15s. Now that ban was in place until 2004, and that law was then repealed, and AR-15s could be sold again. In that 10-year period, the number of mass shootings in the US, on the whole, didn't reduce - if anything they carried on their slow gradual increase. But what did change, however, was the number of fatalities, and the number of injuries in those mass shootings did reduce slightly, because the attackers were using slightly less frightening firepower on the whole in those attacks.

So, it's not as straightforward as guns equals mass killings, there are a lot of factors involved; gun laws, not just federal gun laws, but variations in statewide gun laws about who can and can't have a gun. But one big problem I think we're seeing related to the increased sales of firearms is the pressure on the FBI and the ATF, and the agencies that undertake the background checks - they cannot cope with the demand coming through to them from gun sellers. So, often, after three days, the background checks go back to the seller as inconclusive, which means that the seller uses their discretion whether to sell the firearm or not. That often means, of course, that firearms again are getting into the hands of people who we wouldn't normally want to have them, and what we really need to see are more staff being able to undertake the background checks or the FBI and ATF being given longer to undertake the background checks, so they can do more thorough and conclusive searches. So, there are a lot of problems being stored up for later down the line by this flooding of the market with both handguns and long guns, such as rifles and shotguns.