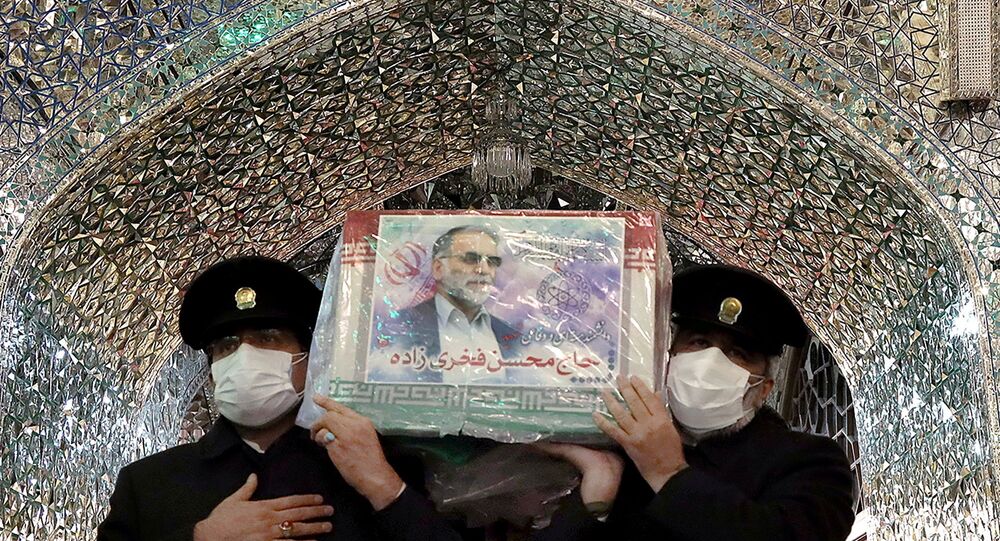 Iran is unlikely to declare a full-fledged war against Israel, which it blames for the assassination of its top nuclear scientist, according to one Israeli expert. At the same time, he claims that Tehran might retaliate, opting for a limited strike or a targeted killing of an Israeli diplomat abroad.

Iran is still trying to decipher the assassination of its nuclear scientist Mohsen Fakhrizadeh, who was killed ten days ago with the help of a satellite-controlled machine gun that purportedly used artificial intelligence.

The Islamic Republic pointed the finger of blame at Israel for the assassination, claiming it was in Tel Aviv's interests to get rid of an Iranian nuclear scientist believed to play a pivotal role in building the country's atomic reactors.

Although Israeli officials remain mum about the country's alleged involvement in the targeted killing of Fakhrizadeh, Tehran has promised the assassins of the top scientist "definitive punishment" that will reach offenders "at the right time".

In Israel, officials and experts are rubbing their head over what these threats might actually mean, and Sputnik spoke to Dr. Eyal Zisser, the Vice Rector of Tel Aviv University and one of the leading Israeli experts on Iran, to gauge his opinion on what retaliation the Jewish state could possibly expect.

Scenario 1: Iran doesn't retaliate directly against Israel, preferring to let Hezbollah, a Shiite militia allegedly funded and supported by Tehran, launch a full-fledged war against Israel. During that war, the group fires rockets on Haifa and other northern cities of the Jewish state, aiming to cause casualties and destruction. Under such a scenario, the organisation also strikes key Israeli targets ranging from ports to gas fields.

Some experts even went as far as to suggest a coordinated attack on Israel from Lebanon, Syria, Gaza and even Iraq, claiming that the country would be attacked by multiple missiles that would lead to a high number of casualties.

Likelihood: "It is highly unlikely," says Zisser. "Hezbollah will not go to war only because of some unconfirmed allegations that it was Israel that assassinated the Iranian scientist. That war, if it was to take place, would result in the full destruction of Lebanon and a huge number of casualties and this is something Beirut cannot afford."

Lebanon’s economy, which has been weak over the past several years, has been dealt even a more severe blow following the eruption of the coronavirus pandemic and the economic crisis that it unleashed. The local currency has lost 80 percent of its value since last fall, and one in every three citizens of Lebanon is unemployed. Many others have been thrust into poverty.

The deadly explosion at Beirut's port that took place in early August exacerbated the fiscal crisis even further, leading to a drop in the country's revenues.

But it is not only the deep economic woes that will preclude any potential Hezbollah attack on Israel; Zisser believes that the Lebanese public will also play a pivotal role in making sure that the war of words would not be parlayed into action.

Scenario 2: Hezbollah will launch a limited strike on Israel, with an aim to paralyse and frighten the state. Alternatively, the Islamic group can attempt to assassinate an Israeli diplomat in one of the country's missions abroad, just as they did in 1982, when a cell of the group’s operators targeted the Israeli ambassador to the United Kingdom.

Israel has already reportedly boosted security in its missions around the world, fearing that that scenario is a definite possibility.

Likelihood: "This is definitely possible. They might send a couple of rockets or they might choose to attack our diplomats. Such an action will not be pricey, nor will it be complicated. It only takes one trained man and several thousand dollars to carry out such an operation. Plus, they might not even take responsibility for the attack," said Zisser.

Scenario 3: Despite the fact that Washington is believed to have not been linked to the assassination of Fakhrizadeh, Iran and its allies might still want to retaliate against US targets, avenging the blood of top general Qasem Soleimani, who was killed in a drone strike in January. In this case, Hezbollah might attack American targets in Syria, which still houses thousands of US troops. Parallel to that, Iranians might launch an assault on US bases in Iraq or elsewhere in the Middle East.

Last week, President Donald Trump ordered the pulling out dozens of diplomats from the war-torn country, preparing for a possible escalation of tensions.

Likelihood: "It is unlikely that the Iranians will want to do anything before [projected] President-elect Biden takes power in the end of January. I doubt that Iranians will want to give an excuse to the current administration to attack them, so it is more probable that they will avoid any open confrontation with the Americans," Zisser stressed.

At the same time, the expert also believes that Iranians are still mulling over a potential response and that their revenge can only be averted if the two sides end up striking a deal on Iran's nuclear ambitions.

"Only then, when and if they have a deal, they will be able to forget about their revenge. But that won't happen until Biden takes office and up until then anything is possible."