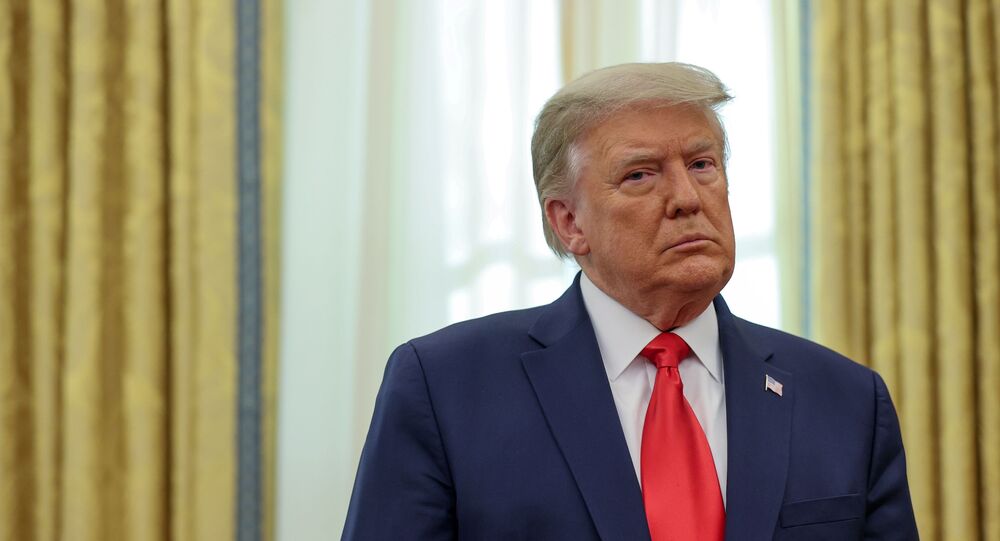 Will Trump Run Again in 2024 and Does He Actually Have a Shot at Winning?

The US president so far refuses to concede defeat in the 2020 election, arguing that it was "stolen" from him as a result of massive voter fraud in several states and promising to challenge the outcome in the court system. To date, however, his legal team has not succeeded in delivering on that promise.

Although Donald Trump continues to battle to overturn the results of the presidential election, he's already hinted that regardless of the outcome of this struggle, the US hasn't seen the last of him. In a speech before the guests of a White House dinner party on 1 December, Trump suggested that should he not be re-elected by the Electoral College on 14 December, he will run again in 2024, purportedly announcing his new presidential bid.

Such a development if his current strategy fails, isn't something wholly unexpected, as Trump will almost certainly want to seek "vengeance" for an election that he believes was "stolen" from him, Professor Robert Singh, a specialist in contemporary US politics at Birkbeck, University of London, says. The professor notes that POTUS has definitely "transformed" the Republican Party and can now capitalise on that change.

© AFP 2020 / ANDREW CABALLERO-REYNOLDS
Supporters of US president Donald Trump look on in front of the White House as they gather near counter protesters in Washington, DC on November 13, 2020.

Indeed his slogan, Make America Great Again, has gone well beyond the confines of his election campaigns, being utilised by other members of the GOP. Fellow party members, as well as GOP supporters, are overwhelmingly in favour of seeing Trump run for the White House again, polls suggest. Republican Senator Lindsey Graham has already called for Trump to run again in 2024, should his current efforts fall short of the mark.

Professor Singh evaluates Trump's chances of running again as 50-50, and notes that any future campaign is likely to have a lot of issues to weaponise against the Democratic contender. He adds that Biden's projected term is likely to play into the Republican's hands as he will have plenty of time for a rematch.

"The Biden administration will likely offer plenty of ammunition for him and his supporters to attack. Already, Republicans are preparing to attack Biden as returning to the failed domestic and foreign policies of Barack Obama [...] If Trump is serious about another run, he would have time to prepare, to fundraise, and to dissuade others - in short, he would easily be the frontrunner", the professor says.

The cues about returning a "stolen election", and fighting back after being "stabbed in the back" by the Deep State are likely to make it into Trump's pre-2024 election rhetoric, Curtin University's US politics expert, Professor Joe Siracusa says. He indicates that these topics are powerful and "seductive", and will hence bring POTUS a lot of followers for his new bid, Siracusa believes.

The issue of the allegedly "stolen election" is already in most of the president's post 3 November speeches, including the one he gave on 2 December. In the address, which he dubbed his "most important speech", Trump stated that the US election system was under "siege" this year and that he is planning to protect it, referring to his attempts to prove election fraud in several states.

2024 Primaries Not Going to Be a Problem, His Age Might Though

Before Trump clashes again with Democrats, either Joe Biden or someone else, in 2024, he still has GOP primaries to win. Many current and former members of his own administration, like Vice President Mike Pence, Secretary of State Mike Pompeo, and former UN envoy Nikki Haley, might also dive into the 2024 Republican race, Professor Robert Singh says. Other GOP members, such as US Senators Ted Cruz, Marco Rubio, Josh Hawley, and Tom Cotton might also join the race, trying to bridge classic conservatism with the "populist-nationalist" trend introduced by Trump. At the same time, POTUS is likely to have a serious advantage over his potential party contenders, the scholar points out.

"It's not at all clear how Trump can easily be attacked on policy grounds, now the party has embraced much of his America First agenda. And although the leadership and establishment would not want to see him run and win, the decision would be in the hands of rank and file primary voters", Singh said.

If Trump decides to run in 2024, he will do so with very few challenges, when it comes to primaries, Curtin University Professor Joe Siracusa believes. He recalled that Trump secured an overwhelming 94% of GOP voters in 2020, and amassed 74 million votes in the presidential election itself, judging by the official numbers so far. Trump himself has repeatedly boasted throughout his presidency of the almost unwavering support he's enjoyed from Republican Party supporters and the polls suggest that at least over half of them still do so even as he is projected to lose his 2020 presidential bid.

© REUTERS / HANNAH MCKAY
'Troll Level Ninja Unlocked': Pranksters Buy Domain to Mock Trump's Alleged 2024 Presidential Bid
There is still a possibility, however, that Trump will simply decide not to run again in 2024, Robert Singh indicates. POTUS might face a lot of problems if he leaves the White House this January – for example, he might become the subject of several investigations, the University of London professor suggests. He's faced several probes, mostly initiated by Democrats, while serving as US president, and the possibility of this trend continuing after January 2021 cannot be ruled out. There is also a chance that Trump, who is currently 74-years-old, will simply decide to focus on his business and private life, instead of going into politics once again, Singh concludes.