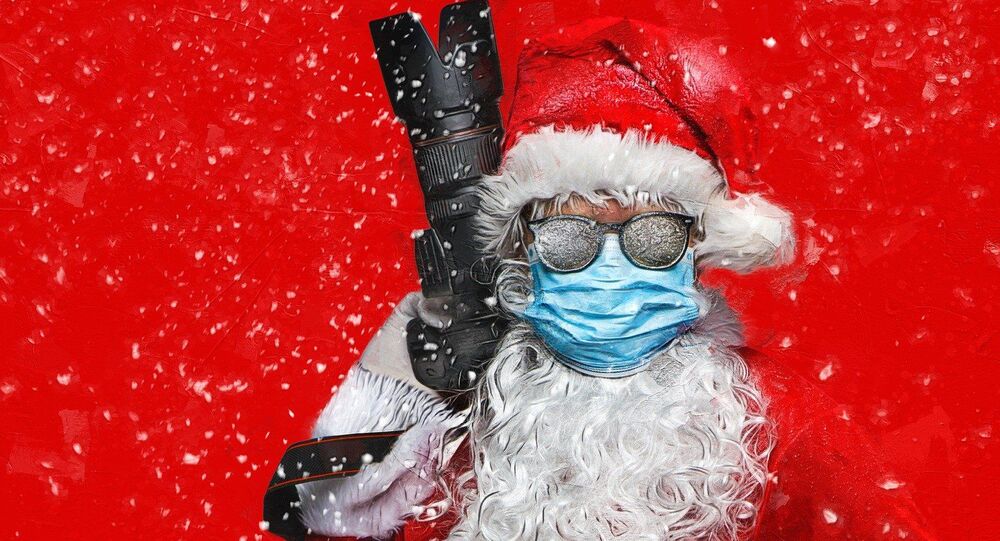 We all know what the 7.8 billion people of Earth will wish for this Christmas and New Year – a world without the coronavirus pandemic. The question is - will we able to spend the most wonderful time of the year with our loved ones? Authorities in some countries have already warned citizens to prepare for a “digital Christmas”.

Amid lockdowns and the threat of the ongoing global pandemic, countries around the world are starting to make preparations for what is expected to be a very different holiday season. Despite the risk of infection and new restrictions worldwide, many suggest that the usual festivities should still go ahead. Looking at how a Christmas 2020 will compare to past celebrations, Sputnik spoke to Dr. Helen Parish, a professor of history at the UK's University of Reading.

Sputnik: As Christmas 2020 and other holiday activities are celebrated during a COVID-19 pandemic and lockdown measures, is this the first time we've seen holiodays festivities restricted?

Helen Parish: It's the first time that it's been closely tied to a pandemic. But perhaps the most famous attempts to regulate Christmas and to actually prevent the celebration of Christmas came in England in 1640s, and in a decision-making process that was echoed in other parts of the four kingdoms. But as a consequence of a parliamentarian Puritan victory in the ongoing civil wars, a decision was taken to prohibit the celebration of Christmas not because it was likely to be a focus for disease or to spread disease, but because it was deemed to be immoral; it was pagan, it was pantheist, it was in theory putting the spiritual health of the nation at risk. So, the Parliament passed legislation which prevented people celebrating, decorating their houses, engaging in the usual festivities. So, the same kinds of discussions were starting to take place when the impact of the pandemic on Christmas was being discussed earlier in the year, but for rather different reasons.

Sputnik: Despite being in lockdown, we're still seeing many prepare for Christmas; in some cases, very, very early on. Some people have been preparing for Christmas, as early as Halloween or the start of November. Why are we seeing people beginning the Christmas season so early this year?

Helen Parish: The current situation has probably exacerbated a trend that's been growing for a number of years and tied up with that is very much the language and the rhetoric that we've heard about the commercialization of Christmas. Christmas always starts too early, and the first person to see a box of mince pies in their local supermarket in August, is there on social media complaining about it. But I think there is something very different happening this year, that the celebration of Christmas has been that sort of iconic target.

Will it happen? Won't it happen? Will we get there? What will we be allowed to do? Decorating houses, starting the Christmas celebrations, is that anchor in the world of normality. It's something that we do at this time of year, and we've seen that in other points in history, where there have been wars or conflicts or in a couple of cases pandemics, that the celebration of Christmas has assumed a much more significant role in people's planning. And I think this year is partly that comfort, and partly that desire, to just bring a little joy and happiness and warmth into what has been a really challenging year for a lot of people.

Sputnik: How will Christmas 2020 compare to past Christmases during the Spanish flu, for example, and the First and Second World Wars? Is there something that we can learn from these past Christmases, celebrated over turbulent, but also similar times?

Helen Parish: That's an interesting question because we've seen in a couple of instances, attempts to regulate people's behavior around Christmas, and particularly to try and break that cycle whereby communities come together and then create a situation that this is worse than it might otherwise have been. So we know, particularly in reports from the US media in 1918/1919, which was the peak of that Spanish flu pandemic, that Christmas shopping started a lot earlier because restrictions on movement were gradually released, and people went out and started to plan and consume Christmas. Particularly in the US, there's a whole sequence of events that come in rapid succession. So you have celebrations around Armistice Day on the 11th of November, then you have Thanksgiving at the end of the month, and then you have Christmas. And the whole sort of lockdown fatigue that prompted those mass celebrations actually released in North American cities a further wave of the Spanish flu.

If you look at the mortality rate, half of those who died from the Spanish Flu died in the early months of the following year, and there's a suggestion that that's very much connected to the exuberant celebrations that went on in November/December. More recently in British history, I suppose that the obvious case to point to is the austerity measures in the UK in the early 1970s, and the difficulties with the availability of power and petrol and all kinds of other things. There you see that desire of people to come together and celebrate Christmas but some tightening of the regulations around what could be done so public trees could only be lit for four days rather than for the whole festive season and Christmas started to migrate back into private homes again.