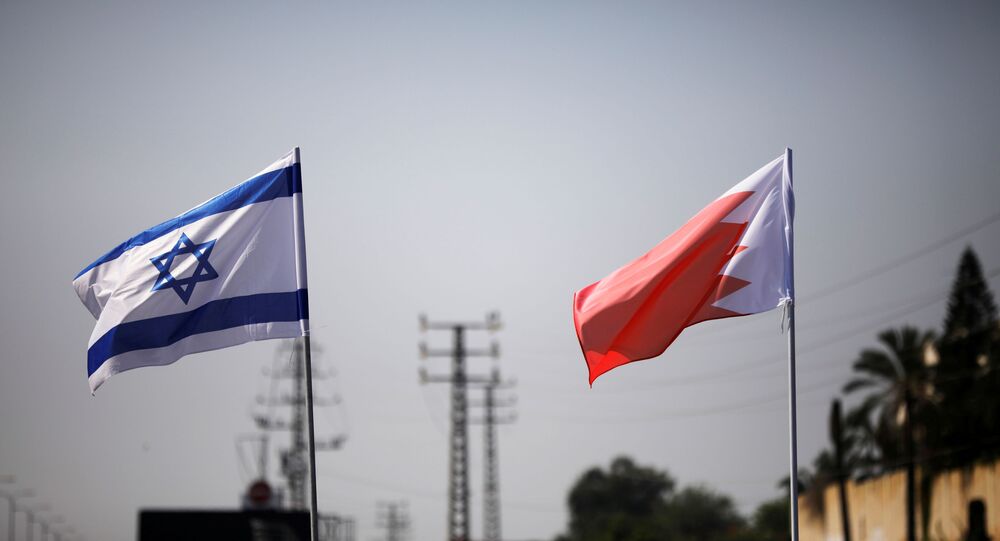 Bahraini Minister of Industry and Trade Zayed Al Zayani will arrive in Israel later today, bringing along a big delegation of businessmen and officials to discuss the boosting of economic ties between the two countries.

Aside from trade and business, Al Zayani, whose delegation will stay in Israel until Thursday, is also expected to meet Prime Minister Benjamin Netanyahu and Israeli Foreign Minister Gabbi Ashkenazi to discuss a number of regional issues, and Tamam Busafi, a Manama-based political analyst, says security will surely top their agenda.

The Fear of Iran?

© REUTERS / Wana News Agency
Bahrain Foreign Ministry Condemns Iranian Scientist's Murder, Calls for Reducing Tensions
Israel has every reason to worry. After the assassination of Mohsen Fakhrizadeh, a top Iranian scientist, Tehran pointed the finger at Tel Aviv, vowing to retaliate for the killing of the man, who is said to have played an important role in the development of Iran's nuclear ambitions.

Tel Aviv has not admitted being behind the targeted killing of the scientist, but Israeli officials took the threats seriously, boosting security in Israeli missions around the world.

Now, with the perceived Iranian threat purportedly getting closer, Israel will need a number of regional allies and Busafi believes the Jewish state will no longer be alone in that battle.

Just as with Israel, Bahrain is also concerned about Iran's reported expansionist activity in the area and eyes the Jewish state as an ally that could play a pivotal role in thwarting that "threat".

"Iran's nuclear programme is not our only concern", said Busafi, referring to allegations Tehran is working on developing weapons of mass destruction that could potentially be used against its regional rivals.

"What worries us is Iran's interference in our affairs and their attempts to turn Bahrain into another Iraq", added the expert.

© REUTERS / WANA NEWS AGENCY
Eminent Academic or Secret Nuke Chief? Iranian, Israeli Observers Weigh In on Fakhrizadeh’s Killing
Bahrain, with its large Shiite Muslim population ruled by a Sunni royal family, has witnessed what it sees as Tehran's meddling in its affairs on a number of occasions.

With the eruption of the Arab Spring in 2011, the tiny Gulf state saw a number of large protests against the government. Suspecting Tehran of being behind the uprising, Manama swiflty dealt with the events, cracking down on protesters and arresting those who violated the law.

But what bothered the authorities in Manama even more was the purportedly Iranian-backed militias that reportedly continue to cast a shadow over Bahrain's stability.

Reports suggest that from 2012 to 2019, Bahrain registered more than 20 pro-Iranian militias that have staged hundreds of attacks, ranging from shootings and car bombings to assaults against communication lines, municipality buildings, and even banks.

In an attempt to handle that threat, Bahrain turned to the US, asking for assistance but under then-President Barack Obama the only thing they received was a cold shoulder.

"That administration was more concerned about the alleged human rights violations and instead of addressing our concerns and the fact that we have been facing the threat of armed militias, they were ignoring our calls for assistance", explained Busafi.

Now, as Joe Biden is projected to take over the White House and fill it with former Obama administration advisers, Busafi says Manama has the feeling of deja vu and this is something that has only bolstered the intention of the Bahraini authorities to cooperate with Israel.

"Biden will probably be diplomatic with the Iranians and that means he will care little about the security of the region. This is why we need a strong ally that we can rely on and that ally could be Israel".

The strengthening of Israel-Bahrain ties have progressed rather rapidly, to the surprise of both nations. Since mid-September the two states have signed a number of agreements in the fields of aviation, tourism, and trade, and Busafi is certain that more is yet to come.

"Israel has realised that it could not live with a conflict around it forever, so it chose peace over war. Bahrain is also interested in peaceful coexistence and I believe the ties between the two countries will get stronger with time".