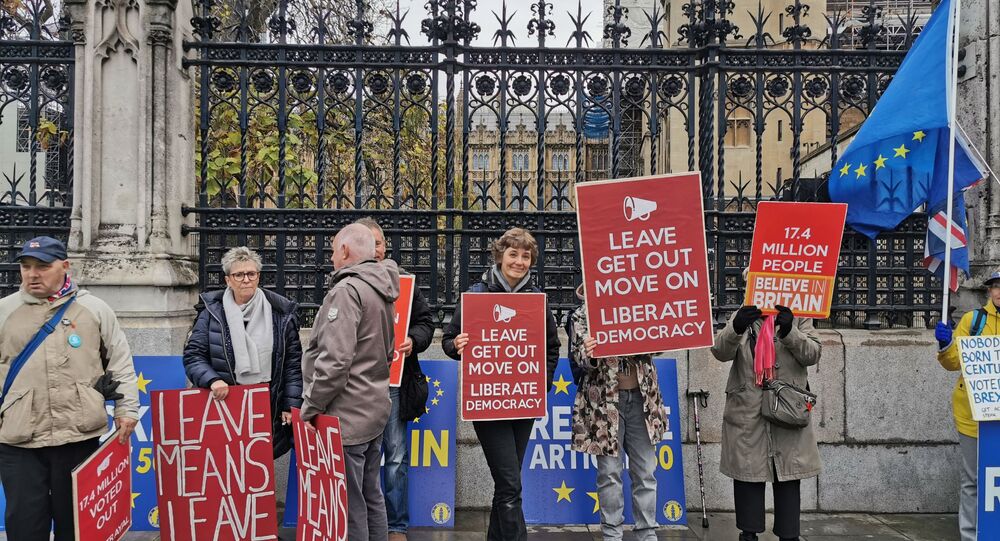 It’s been suggested that the UK’s Prime Minister Boris Johnson, will speak with the European Commission President, Ursula Von De Leyen, on closing a free trade agreement between the two parties.

PM Boris Johnson has categorically ruled out watering down any of Britain’s demands to secure a free trade deal, amid fears that concessions will be made on fisheries and state aid rules. Alistair Jones, an Associate Professor at De Montfort University, has shared his stance on the matter.

Sputnik: With just over a month to go before Britain leaves the EU, how confident are you that an agreement between London and Brussels will be ratified and that Boris Johnson will not concede to EU demands?

One of the problems we've got is that the British government has actually not been playing, if you like with a straight bat, in that the EU has been asking for information about the British position; so the EU can then inform Britain of what the EU's position is, and Britain has refused to actually give all the information that's required.

So, we've been playing it not in the most appropriate manner to actually try to get a deal. Now there's a whole range of issues in particular to do with fishing and to do with state aid, and also the Internal Market Bill, which are real stumbling blocks in getting any agreement reached.

So, until they can be ironed out and in a very short period of time, it's highly unlikely they will be, but if they're not ironed out then we leave without a deal. Well, we have technically already left, but there is no subsequent deal to come into place.

Sputnik: Over the weekend Rishi Sunak suggested that Britain should walk away with a no deal if the EU refuses to back down. Is this a serious threat that the PM and the UK is still willing to consider?

Alistair: I think this has been the actual starting point for the UK government as a whole under Boris Johnson. I think the way the whole negotiations have been conducted, the refusal to put any extension on the negotiating period despite the COVID pandemic, an extent of what I call sheer-bloody-mindedness has been such that no deal is actually the starting point, and some of the charades that have been conducted by Boris Johnson and other members of his government have been somewhat embarrassing; in that they demonstrate the lack of commitment of the UK Government has of actually trying to get a deal.

The reality appears to be that wherever possible, Britain sort of sticks its oar in, and rather than actually trying to develop a negotiating position and the idea of a negotiating position is that it will move a little bit - it has all been 'accept everything that we want, we can't move'. Whereas the reality is, there has been room for manoeuvre but the British government's been very reluctant to take it wanting to have a no deal and then being able to blame the EU for not giving us the deal that we wanted, because we wouldn't move in any of our position.

Sputnik: Last week, we heard from Lord David Frost that a deal will be agreed upon this week. Is this an accurate timeframe? Or can we expect more delays, theatrics and frustrations beyond this week?

Alistair: I think the phrase 'theatrics and frustrations' sums it up to perfection. I think that's what we're going to see. The problem is on some of the issues such as state aid, if the UK is not going to abide by the broad picture of state aid rules that the EU operates with, and operates with any trade relationships that it currently has, if we're not going to abide by those or at least the broad picture of them, then we can't actually get a deal.

On top of this, we can't get a deal with the Internal Market Bill in place. Now that's currently going through the House of Lords and the House of Lords has actually tried to remove the contentious clauses out of that legislation but that's still got to come back to the House of Commons.

Now, if Boris Johnson is willing to work towards getting a deal, he will accept those amendments from the House of Lords, but the noises that we're getting from 10 Downing Street is that he's going to go back on that, and he's going to say 'No, it is what it is. We're going to have internal market legislation the way it is'.

And that will lead us to a position where basically we forced the EU into a no deal situation, and we will then try and blame them. At the meantime that has a huge implication for Northern Ireland and its relationship with Republic of Ireland, the whole peace process as well. So, there's a lot of other things that are hanging on to this potential agreement but my feeling is we're not going to reach one.