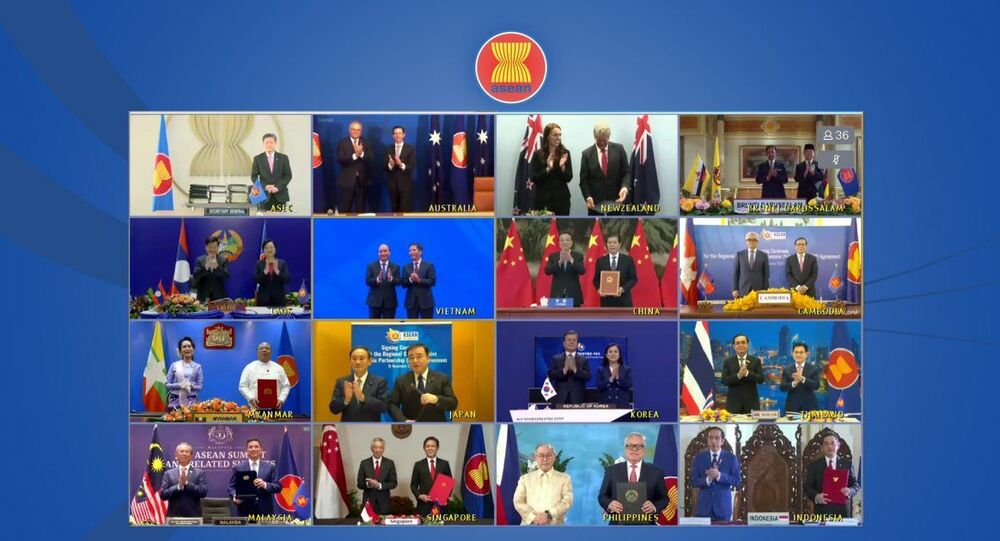 China is slowly reorienting its economy "away from North America" and "towards the rest of Asia" as evidenced by the newly finalised Regional Comprehensive Economic Partnership that it has signed with 15 fellow Asian countries, covering 2.3 billion people, an economic analyst tells Sputnik.

Michael Roberts has worked as an economist with investment research firms in the City of London for over 30 years. Mr Roberts explains the significance of this new agreement as well as the similarities and differences between it and those that have been pushed by the US government in the past, such as the ultimately doomed Trans Pacific Partnership.

Sputnik: What exactly does the RCEP agreement do?

Michael Roberts: The RCEP takes most of the existing agreements signed by the 10 members of the Association of Southeast Asian Nations — Brunei, Cambodia, Indonesia, Laos, Malaysia, Myanmar, the Philippines, Singapore, Thailand and Vietnam — and combines them into a single multilateral pact with Australia, China, Japan, New Zealand and South Korea. By combining a mishmash of separate arrangements into a single deal, RCEP brings Asia a step closer to becoming a coherent trading zone like the EU or North America. This covers 2.3 billion people.

The RCEP signatories constitute 30 per cent of global GDP compared to the North American trade pact with 28 per cent and the EU with 17 per cent. The RCEP strengthens East Asian interdependence, raising trade among members by $428 billion and raising global GDP by $200bn annually by 2030. That sounds large but constitutes only an increase of 0.2 per cent of annual global GDP. Nevertheless, these agreement brings regional ties closer to the institutional arrangements proposed back in the 1990s and incentivizes greater cooperation among China, Japan and South Korea.

Sputnik: How is the RCEP different from US-led initiatives such as the Trans Pacific Partnership or the Transatlantic Trade and Investment Partnership?

The RCEP does not go as far as the Comprehensive and Progressive Agreement for Trans-Pacific Partnership (CPTPP) from which the US withdrew. The membership for this excluded China (Australia, Brunei, Canada, Chile, Japan, Malaysia, Mexico, New Zealand, Peru, Singapore and Vietnam) and is very similar to the Trans-Pacific Partnership, which all 11 countries, plus the United States, had negotiated.

The CPTPP will eliminate tariffs on 96 percent of products that enter intraregional trade, while RCEP will likely cover only 80–90 percent of these products, and even for these goods, tariffs will not be fully eliminated in the transition period. In addition, RCEP is said to include extensive flexibilities for various countries in virtually all chapters of the agreement.

The intellectual property provisions add little to those that most members have already accepted in the World Trade Organization (WTO) or other agreements. RCEP will not have chapters on labour, the environment, or state-owned enterprises. While RCEP will include a chapter on electronic commerce, its provisions will not constrain customs duties on electronic transmissions, nor require commitments on cross-border data transfers or data localization restrictions.

Sputnik: The TPP and TTPIP were both heavily criticised for affording too much power to corporations and patent holders and weakening environmental and labour protections.

Indeed. However, ironically, as the RCEP does not have any agreements on patents rights, the environment, labour conditions or on state intervention, it does not contain the contradictions embodied in the TTIP proposals.

Sputnik: Will the RCEP benefit workers and the environment as well or just business interests?

Michael Roberts: China, Japan, and Korea gain the most from the RCEP15 agreement as these countries are large and account for 80 per cent of RCEP15's GDP and they are not jointly members of any existing free trade area.

As there are no provisions in the RCEP for labour or the environment, it will not help or hinder progress in those sectors, except to say that the trade services sectors in all the economies will benefit most and that is less environmentally damaging than expansion in raw materials or manufacturing sectors.

Sputnik: Can this deal be seen as a product of the US-China trade war that emerged over the past few years or is there more to it?

Michael Roberts: What is most significant politically is that the US and India have been left out of the RCEP.  Coupled with the fact that the CPTPP also excludes these giant economies while China is now the leader of the RCEP, it is clear that Asian governments are more interested in expanding regional trade integration to their mutual benefit than waging a trade war against China on behalf of the US.

Sputnik: To what extent does this trade deal reflect the ongoing economic changes being experienced in China?

Michael Roberts: What the RCEP deal shows is that the Chinese government aims to switch its manufacturing and export power towards the rest of Asia [and] away from North America, as well as through its Belt and Road initiative towards Central Asia.  We can expect to see trade between the US and China drop sharply over the next decade.  That reflects the growing nationalist reaction in China to what it perceives as a pernicious attack on its economic and political interests by America, including America's condemnation of China over the COVID pandemic. This is the message of the 2020s.