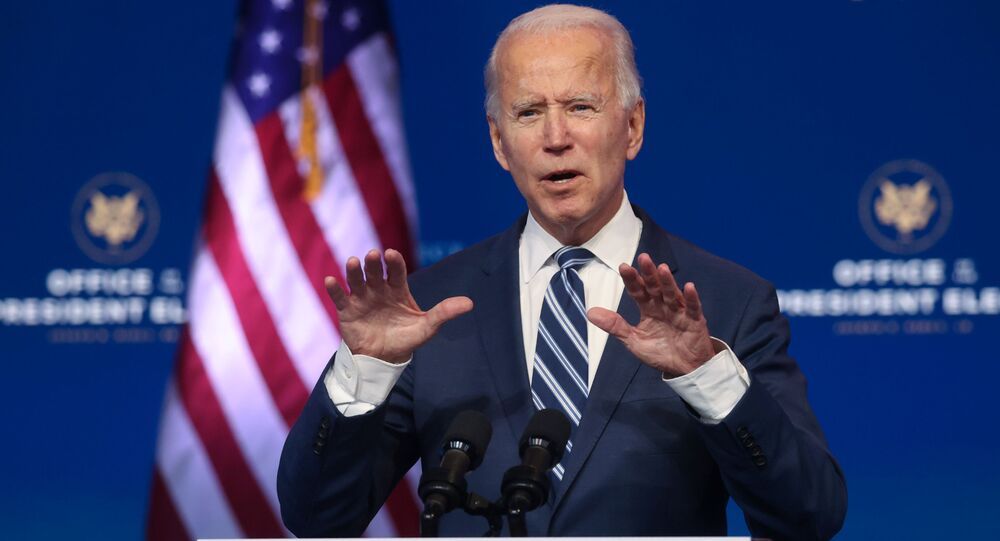 US Won't Repeat 'Mistakes of the Past' When Dealing With Egypt if Biden Wins, Professor Says

Washington invests billions of dollars in Egypt, also considered a close ally in the fight against terror, and a Cairo-based expert says that partnership won’t be affected under a Biden administration.

While votes in the US presidential race are still being counted, many world leaders have already congratulated Joe Biden on his projected win, with Egyptian President Abdel Fattah Al-Sisi being one of the first to send out a note, expressing hope for "further cooperation" with Washington.

Some say a Biden presidency, if he does end up taking office in Janaury, will be challenging for Al-Sisi, as the new administration is likely to be less tolerant when it comes to human rights and other issues that Cairo prefers to brush under the rug.

But Maged Botros, a professor of political science and the dean of Egypt's Helwan University, says decision-makers on Capitol Hill will not dare to jeopardise US relations with Egypt, one of their main allies in the region.

This stance is understandable. Egypt's geographical position makes it a key player when it comes to handling terror and other security threats. America's direct investments in the country, including in the gas and oil industries, stood at more than $21 billion in 2018.

© AP Photo / Vahid Salemi
Off to a New Start? US-Iran Ties Might Improve Under Biden But Gaps Won't Be Easy to Bridge
Nonetheless, the prospect of the Democrats returning to the White House still stirs up the ghosts of the past, recalling 2011 and the January revolution.

At the time, the Obama administration revoked its support for then-President Hosni Mubarak, called for him to step down and eventually embraced the Muslim Brotherhood (MB), a movement deemed a terrorist outfit by some states, and which seized control of Egypt after the ouster of the president.

However, it didn't end there. In 2013, when militant attacks became a common phenomenon in Egypt, Cairo turned to Washington asking for its Apache helicopters, as the latter had previously proven to be efficient in eliminating terrorists in remote and hard-to-reach areas of the Sinai Peninsula.

Washington refused Cairo's requests, causing the Egyptian authorities to reconsider its reliance on the US, and pushing the nation to diversify its weapons supplies. The latter now come from such countries as Russia, Germany, and France.

"Of course, we will not enjoy very tight relations [if the Democrats come to power - ed.] but I am not worried. The Democrats will not repeat the mistakes of the past", reassured Botros.

The reason for this, believes the expert, is not only the belief that the "Egypt of 2020 is much stronger than what it was in 2013", but also the changing nature of global politics.

"The US is no longer a sole key player on the international arena. It is one of the strong ones but it is definitely not the only one. Plus, unlike President Donald Trump, who ran a one-man show, the Democrats are an institution and they would like to see cooperation in global affairs".

The practical meaning of this is that, unlike in the past, Egypt will not stand alone against the Muslim Brotherhood and Washington will end up cooperating against the movement, just like a number of European countries that have already taken steps to curb its growth.

"I don't have illusions that the US will end up banning the movement. The group exists in more than 70 countries and it is deeply rooted there. But America's European allies will make sure to put pressure on Biden and warn him to take care when dealing with the MB".

And there is another reason that could bring Washington and Cairo closer - Saudi Arabia. Under Trump, US relations with Riyadh have flourished, primarily because the two countries shared a common goal - the weakening of Iran and its allies.

© AP Photo / Evan Vucci
Traumatised by Obama's Foreign Policy, Saudi Arabia is Wary of What's to Come Under Biden
With Biden in office, that approach towards the Islamic Republic might change, and so will the ties with Riyadh, who is already eyeing the situation in Washington with concern. If this does indeed turn out to be the case, it will only bolster Egypt, says Botros.

"The US will want to be active in the region and to do this it will need allies. Riyadh will not be as close to Washington as it used to be in the past. So Biden will need Egypt and this is the reason why I strongly believe that military, economic, and political relations between the two states won't be damaged".