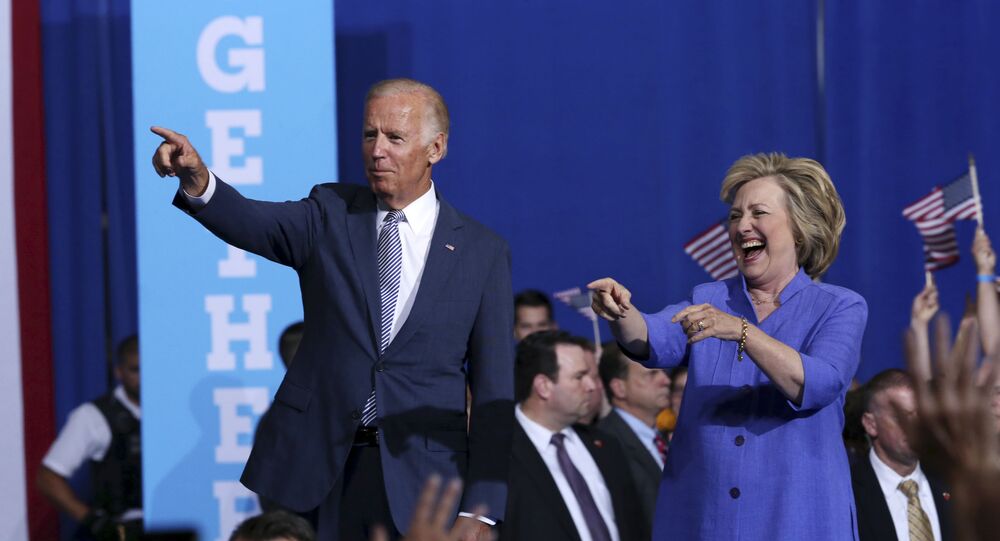 The Washington Post reported on Thursday that former US Secretary of State and ex-presidtial candidate Hillary Clinton is being considered for the post of Ambassador to the United Nations undet a potential Joe Biden-Kamala Harris administration. Clinton has yet to address these reports.

According to The Washington Post, Joe Biden's team believes that Hillary Clinton is the perfect choice for the position of US envoy to the United Nations since she has the ability to boost America's image and prestige in the eyes of international community after Donald Trump's turbulent presidency.

Wall Street analyst and investigative journalist Charles Ortel has shared his views on the matter.

Sputnik: According to reports, Joe Biden's transition team is considering former Secretary of State Hillary Clinton for the role of ambassador to the United Nations. To what extent are these reports likely be true, in your view?

Charles Ortel: While serving as an Ambassador to the United Nations is seen by some as a high level appointment, this position ranks far below Secretary of State or the post -- President of the United States -- that Hillary Clinton still believes she won in November 2016.

I suspect this rumor is just speculation and that Hillary Clinton might want a much more important role such as Secretary of Defense in a Biden Administration, should Joe Biden actually be accorded 270 electoral votes when the joint session of the House and Senate meets on 6 January 2021. Only then may we know whether candidates in the November 2020 election will be certified as winning terms as President and Vice President.

Moreover, given the stakes and the litigious nature of modern life in America, uncertainties may continue past 6 January 2021 but likely will be resolved by noon on 20 January 2021, as the U.S. Constitution provides.

Sputnik: Given Hillary Clinton’s performance as Secretary of State and all the controversy it has generated, for example, with respect to the Benghazi attack and her general role in the Arab Spring, how contradictory could this appointment can be?

Charles Ortel: Any decision to appoint Hillary Clinton to a post requiring confirmation by the U.S. Senate will revive determined interest in going back over the controversies you highlight as well as allegations of corruption and charity fraud involving networks of "charities" operated by Bill, Hillary & Chelsea Clinton.

In addition, such an appointment might raise interest in examining many "charities" operated by the Biden family and their allies.

As for being contradictory, Joe Biden and Hillary Clinton both have horrible records shaping U.S. foreign policy and questionable financial ties to foreign governments and to globalist oligarchs. For that reason and because little surprises me concerning politics, perhaps it makes eminent sense to imagine Hillary serving in Biden's cabinet in some form or fashion.

Sputnik: Experts have long claimed that Biden’s presidency might be a so-called ‘throwback’ to Barack Obama’s policies. We also know that Susan Rice is projected to be tapped as the next Secretary of State. What does this tell us about Joe Biden’s policy plans, in your view?

Charles Ortel: Should Joe Biden actually win, he will be greeted with honor at venues including the World Economic Forum and the United Nations, seats for those who celebrate unregulated globalism.

Gains that Presiden Trump won for private sector workers and for investors will be erased in part via Executive Order and following bitter battles to enact legislation, unless Democrats manage to wrest control of the asenate from Republicans, in which event legislative rollback of Trump reforms will occur more rapidly.

© REUTERS / Jason Reed
Biden May Pick Barack Obama as New US Ambassador to UK, British Media Claims
Either way, investors in U.S. bonds and stocks are likely to withdraw capital fearing downdrafts from an expected new chapter in the "War on Capitalism" begun in earnest by President Barack Obama on 20 January 2009.

Though coddled elites will not admit this, unregulated globalism is a dire threat to private sector workers, especially in nations such as America, where workers are paid much higher wages than elsewhere.

In contrast, public sector workers may delay reckoning coming from relentless advances in technology, but only for as long as profligate governments can convince investors and counterparties to accept fiat currencies as a medium for investment or trade.

How the election of 2020 ultimately gets resolved will have profound consequences inside America and worldwide.