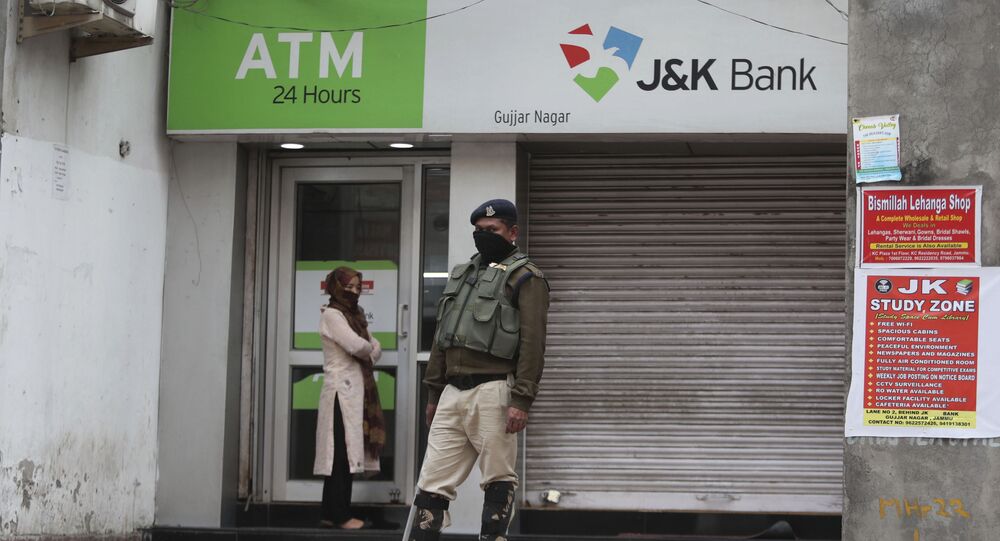 While India has consistently asserted and maintains that the abrogation of Article 370 in Jammu and Kashmir last year is an internal matter, a former aide of top BJP leader Atal Bihari Vajpayee in the Prime Minister's Office reckons the territorial dispute won’t be solved without Beijing’s involvement. He left the BJP in 2009.

Former BJP politician Sudheendra Kulkarni, who has been a vocal advocate of resuming the stalled dialogue process between India and Pakistan, feels that the decades-old Kashmir dispute has no longer remained a bilateral one involving just India and Pakistan.

After quitting the BJP, Kulkarni subsequently founded the Forum for a New South Asia, which advocates India-China-Pakistan cooperation.

"If you look at the map of the pre-1947 princely state (pre-independence Jammu and Kashmir), it is no longer exclusively within India. Three parts of its territory are under the effective full control of three sovereign nations – India, Pakistan, and China," he points out in an interview with Sputnik, adding that a "three-nation" dialogue involving Beijing was needed to peacefully resolve the decades-old territorial dispute.

Kulkarni reasons that both New Delhi and Islamabad serve to benefit from the re-opening of the peace process, whether it's with respect to Afghanistan or with regards to the Kashmir dispute.

Sputnik: Pakistan's Prime Minister Imran Khan recently stated that he is against India's involvement in Afghanistan. What are India's options, given Pakistan's geographical advantage?

Sudheendra Kulkarni: Imran Khan is not right. Pakistan is, of course, the immediate geographical neighbour of Afghanistan. But India is Afghanistan’s close friend and a strong cultural-civilisational neighbour. Both India and Pakistan are important for the restoration of peace and nation-building in Afghanistan. New Delhi and Islamabad should work together, and not work against each other in Afghanistan.

Sputnik: Is India hurting its interests by not resuming the stalled dialogue process?

Sputnik: Is there a way to convince Pakistan to come to the negotiating table without having to go back on last year's decision to abrogate Article 370?

Sudheendra Kulkarni: It is necessary to view the situations in Afghanistan and Kashmir separately, each on its own merit.

India and Pakistan should resume their bilateral dialogue process without any preconditions from either side. And the talks should cover all the outstanding issues, including Kashmir and terrorism. For talks to be fruitful, all types of violence must end.

As far as the Jammu and Kashmir issue is concerned, the reality on the ground is that it has no longer remained a bilateral dispute, but a a trilateral issue. If you look at the map of the pre-1947 princely state, it is no longer exclusively with India. Three parts of its territory are under the effective control of three sovereign nations – India, Pakistan, and China.

Therefore, for a comprehensive, peaceful and final settlement of the J&K issue, what is needed is a three-nation dialogue and cooperation involving New Delhi, Islamabad, and Beijing.

Sputnik: The Afghan Peace Deal seems to be unravelling, with several unclaimed terrorist attacks having been reported over the last few days. What could the possible security repercussions for India and the wider region entail?

Sudheendra Kulkarni: Militancy offers no solution at all to the Kashmir issue. This is amply demonstrated by the sad saga of violence and counter-violence, in which the worst sufferers are the innocent people of Kashmir. Mahatma Gandhi’s principle of non-violence is the only guarantor of a lasting solution – be it in Afghanistan or Kashmir.

Too many people have been killed and too much blood has been shed in both Afghanistan and Kashmir. Shouldn’t we learn any lesson from this wrong path? Shouldn’t we rediscover our common humanity?

Sputnik: How could India prepare itself for an imminent change of the guard in Washington DC?

Sudheendra Kulkarni: The victory of Joe Biden in the presidential election in the United States is a welcome development – not only for America but also for South Asia.

India should stop expecting Biden to become anti-Pakistan, and Pakistan should not hope for him to be anti-India. The best outcome would be if the US – along with Russia and China – worked to bring India and Pakistan closer for a positive solution to the Afghanistan and Kashmir issues.

Sputnik: How would you rate Prime Minister Narendra Modi's Pakistan policy? Has India been able to isolate Pakistan on the global stage for its alleged support of cross-border terrorism?

Sudheendra Kulkarni: India cannot – and India has not been able to -- isolate Pakistan on the global stage; India should not even continue with this futile effort. Similarly, Pakistan should also not persist with the futile path of trying to corner India in global capitals.

Modi’s Pakistan policy has been inconsistent. He made a dramatic peace gesture by visiting Lahore in December 2015, when Nawaz Sharif was the prime minister (of Pakistan). But thereafter he has shut all the doors for talks. The stark truth is: there is no alternative to talks. And India-Pakistan talks should resume soon, and proceed in an uninterrupted and uninterruptible manner.