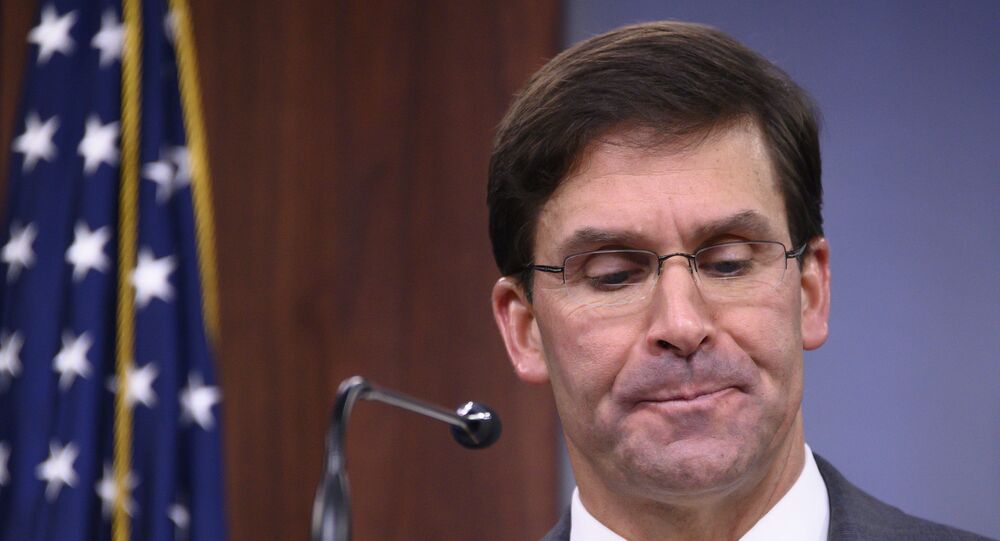 Donald Trump said in a statement on Monday that he had fired Defence Secretary Esper and was replacing him with Director of the National Counterterrorism Centre Christopher Miller. The move comes as Trump is taking legal action over what he says is massive election fraud after US media outlets projected Joe Biden as the winner.

Karen Kwiatkowski, a retired US Air Force lieutenant colonel whose assignments included duties as a Pentagon desk officer and a variety of roles for the National Security Agency, believes Trump has had a beef with Esper since the very beginning and that the move to replace him is a legitimate exercise of power.

Sputnik: US President Donald Trump has announced that he is replacing Mark Esper with Director of the National Counterterrorism Centre Christopher C. Miller, who will become the acting secretary of defence. Why is Trump doing this right now? What are the main motives behind it?

Karen Kwiatkowski: I think a better question might be why did he hire Esper in the first place, and not Miller, who as a former enlisted man and career officer, is the kind of secretary of defence that Trump and his voting base seem to prefer. I believe that Trump has not been happy with Esper from the beginning, and hired him as a nod to the big defence contractors (and their congressional advocates). Trump is exercising his power legitimately here, and he is behaving as if he is staying for four more years. This action is consistent with Trump's views that Biden and the Democratic Party have wronged his election with middle of the night ballot drops and other activities. If nothing else, it simply means that Trump believes the Pentagon and the nation will be better served in the next several months by a combat-hardened counter-terrorism expert like Miller, as the transition to Biden's choice of SecDef takes place sometime in the spring.

Sputnik: How will this appointment affect the electoral situation? Will it affect the outcome of the election?

Karen Kwiatkowski: I don't think that this appointment makes any difference vis a vis the election, and the various activities and possibilities in play as we move toward the actual December 14th meeting of the Electoral College members, in each of the 50 states, to certify each states' electoral votes, and the subsequent formalisation of that certification not later than December 23rd. It is a show of confidence by Trump to his supporters. It is also a show of confidence to the other half of the country who amazingly seem to expect Trump to suddenly start behaving as past presidents have in their final few months of office.

Sputnik: Could the move escalate the situation? How might this move turn out for Trump?

Karen Kwiatkowski: If anything, having a well-qualified secretary of defence in place makes sense if we expect to see domestic violence or other conflicts break out between Americans. That said, Trump supporters are substantially culturally different than Biden, Harris and Sanders supporters, and no cities are burning as they were in the lead up to the election. I think for Trump, he is thinking about what he can do as president that serves his party, and the country, given that it is not clear to him yet if he has four more years or two more months in office. Frankly, he should have fired Esper months ago, and it's possible he meant to do so, and with the demands of the election simply didn't get around to it until the campaign was over.