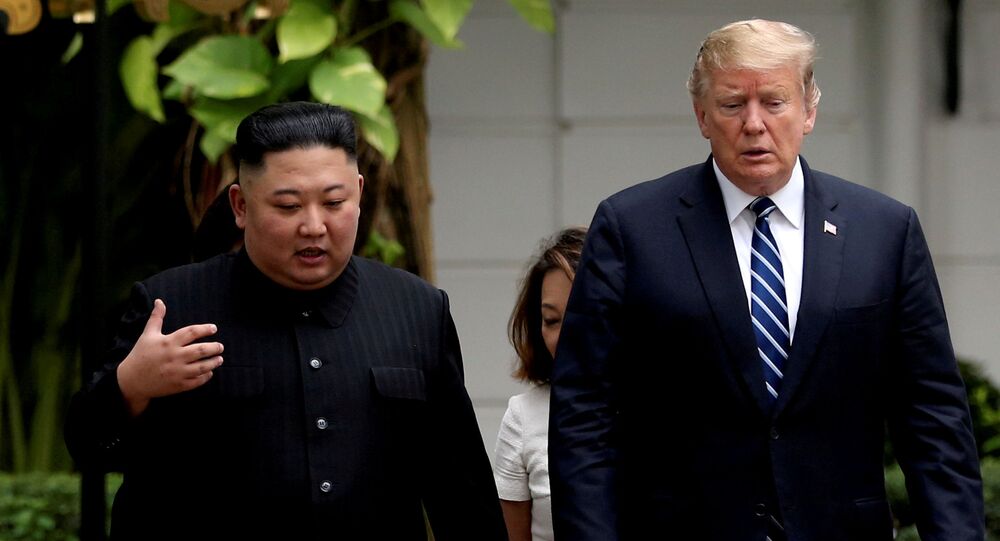 Despite the best efforts of South Korean President Moon Jae-in to secure a lasting peace deal with his country's neighbours to the north, progress on the matter has been stunted due to the current lack of support and a coherent policy from the US government, a peace activist explains.

North Korea remains under "punishing" economic sanctions imposed by the US, which has yet to sign a peace agreement with the east Asian country despite the Korean war ending in 1953. Should Joe Biden be sworn in as president in January 2021 he is unlikely to find "anything of substance" to build upon in respect of US-Korean relations and so therefore must confer as quickly as possible with the South Korean president on the best way forward, argued Kevin Martin of PeaceAction.

Mr Biden has claimed victory in the 2020 US presidential elections, and has been declared the president-elect by the Associated Press. However, current US president Donald Trump has refused to concede the election and has promised to challenge the matter in the courts.

Sputnik: How would you compare the foreign policy positions of the administrations of US Barack Obama to that of Donald Trump towards relations with North Korea?

Kevin Martin: Obama had only unofficial, “back-channel” talks with North Korea, while the Trump Administration did of course conduct official government to government diplomacy. However, Trump, being unpredictable and undisciplined, thought he could rely almost solely on his “bromance” with Kim Jong Un, so predictably, no diplomatic breakthroughs came about. In the end, Trump’s approach was also typical superpower hubris, thinking it could impose its will on a smaller country.

This was all very disappointing, especially for South Korean President Moon Jae-in, who has been the real leader for peace and diplomacy on the Korean peninsula. It was also disappointing to Koreans, including the pro-democracy forces in South Korea who deposed the former corrupt president in the 2017 Candlelight Revolution, and for Korean-Americans wanting a peace agreement. Still, the Pyeongchang Winter Olympics in 2018 and inter-Korean diplomacy were a significant breakthrough. The smiles on Moon’s and Kim’s faces when Moon stepped over the DMZ border were genuine and joyful. The fact that such progress was not capitalised on lies with the US, not North or South Korea.

Sputnik: During the 2020 US presidential debates Donald Trump celebrated the fact that “there’s no war” with North Korea and Joe Biden argued that Trump’s policies have failed and that Biden would not have negotiated with Kim Jong-Un without the pre-conditions. Is Donald Trump right to celebrate the current state of US relations with North Korea?

Kevin Martin: No, Trump’s seat of the pants diplomacy was, not surprisingly, a failure. It’s not clear there is anything of substance for a Biden Administration to build on in terms of US-North Korea relations.

Sputnik: Does Joe Biden’s position make more sense for the people of the US and the people of the Korean Peninsula, given the fact that North Korea’s ballistic missile system is alleged to have been developed further over the past few years?

Kevin Martin: Not necessarily. Biden should move quickly to confer with President Moon in order to revive diplomacy with the North. Pre-conditions or not are not really the issue. North Korea needs relief from punishing economic sanctions hurting its economy, and progress on that issue, as well as nuclear and conventional military issues and an overall peace agreement to officially end the Korean War, should be pursued. North-South economic ties and family reunions, allowing visitations to re-unite divided families, should also be swiftly negotiated, and could lay the ground for a broader peace agreement.

Sputnik: The Director of the US Council on Foreign Relations Richard Hass recently tweeted that the “situation” with North Korea has “become worse become worse as [North Korea] has increased its nuclear arsenal and improved its missile capabilities”. Do you agree with Mr Hass?

This president did inherit a difficult situation with North Korea. Unfortunately it has become worse as NK has increased its nuclear arsenal and improved its missile capabilities. The personal diplomacy was about photo ops rather than results.

​Kevin Martin: That is very possibly true, which could make North Korea less likely to compromise, but that must be tested with diplomatic overtures and hopefully, sustained negotiations. High stakes summits without much groundwork being laid with prior talks, predictably, failed under Trump. Biden can try a more sound approach.

Sputnik: Is it clear what the people of South Korea want and, if so, should the US government simply defer to the policy positions of the South Korean people?

Kevin Martin: Generally, South Koreans have supported President Moon’s leadership for peace and diplomacy, and he has delivered in terms of what he could do. He has been the most important president in this process, not Donald Trump. Trump has been such an unpredictable partner, and perhaps Biden will be more reliable. There are conservative forces in South Korea and in the Korean-American community who oppose diplomacy with the North, but in general they are a minority, though at times a vocal one.

Sputnik: What kind of policies should the US government be pursuing towards the Korean peninsula regardless of who holds the presidency?

Kevin Martin: A formal peace agreement to end the Korean War should be the objective. Most are likely unaware that there is still only an Armistice, which was meant to be temporary, signed in 1953.

Other issues, as listed above, should also be up for negotiation, and may come together more quickly, laying the groundwork for a peace agreement. De-nuclearization may be a bit down the road, as North Korea is not going to give up its nuclear deterrent, facing the overwhelming US nuclear force, in the absence of a peace agreement and significant progress on other issues, including the conventional military threat it faces from the US, South Korea and even possibly Japan. North Korea’s nuclear disarmament may only happen in the context of a regional nuclear weapons-free zone, which could be the best path and should be explored.