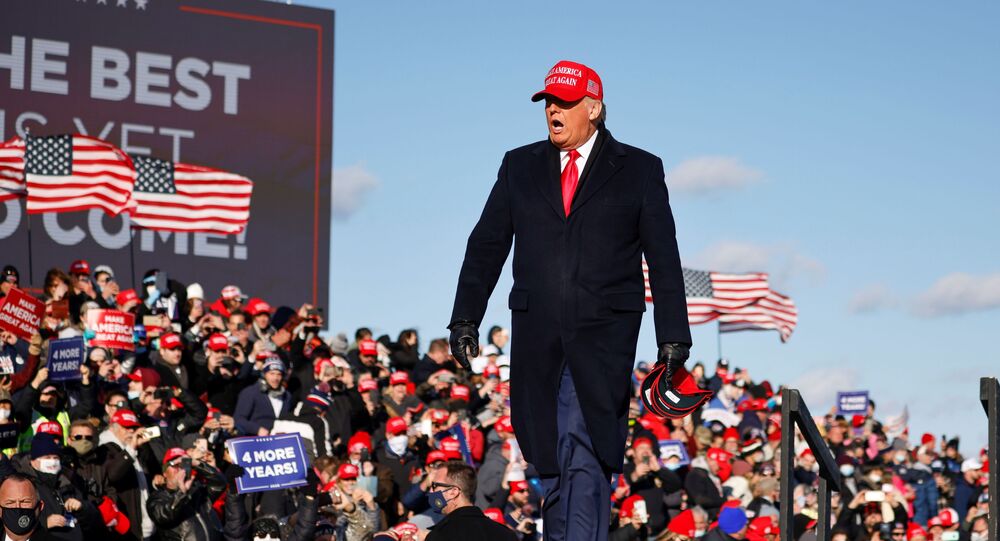 What was expected to be a landslide win for Joe Biden has become a very tight race, with the official result of the American presidential election still not confirmed. Were the polls wrong and did they undermine support for Trump?

Sputnik spoke with the leader of the Heritage Party, David Kurten, to find out his thoughts on why pollsters, the public, and the mainstream media continue to underestimate Trump.

Sputnik: The polls, the public, and the mainstream media all predicted a landslide for Joe Biden. This hasn't happened. Why is that the case, do you think?

David Kurten: It hasn't happened because Trump has been a fantastic president. He has increased the wealth of ordinary Americans who don't get any airtime on the mainstream media. There's more jobs in America. He's brought jobs back to America from China. He's improved people's morale about the country in wanting to put Americans first in their own country. And he's gained a lot of support among the grassroots people on Main Street, not the people who inhabit the TV studios of the mainstream media. So I'm not surprised that Trump has got the support that he has.

Sputnik: Pollsters have always underestimated Donald Trump due to the silent majority, or shy Trump voters, who apparently don't admit they support him. Do you think there's any truth in this at all?

David Kurten: That's absolutely right. And you've seen pictures and videos on social media of people saying that they support Trump, or wearing MAGA hats, who have been abused in the street, sometimes being physically attacked. People who've got Trump posters outside their home have had parcel deliveries just thrown over the lawn and have been damaged, and so on. So people are sometimes worried about saying that they support Trump, because they know that there are some extremists on the far left who will try to harm them or damage their property. So this is a real issue. And this is not something that should happen in a free democracy. But this is the world as it is. So there are many people who would vote for Trump quietly, but maybe not say anything publicly.

© REUTERS / JIM URQUHART
Supporters of U.S. President Donald Trump gather during a protest about the early results of the 2020 presidential election, in front of the Maricopa County Tabulation and Election Center (MCTEC), in Phoenix, Arizona, U.S., November 6, 2020.

Sputnik: Why do you think so much of the mainstream media underestimate the support that Donald Trump actually has?

David Kurten: I think that they must know that he has the support, but they're actually propaganda machines. They are there not to report the news, they are there to spin a narrative. And the narrative that they want to spin is that Biden's going to win, the Democrats are good, woke progressive ideology is good. And anybody that doesn't agree with that is bad and either a bigot or a xenophobe, or something like that. These are the kind of smears they use against Trump and against Trump's supporters in order to try to make it seem as though Trump doesn't have support and everything is going the way of their man Biden, who represents the cultural Marxist progressive left, but they're not reporting reality. They're actually trying to invert reality and that's been going on for a long time.

Sputnik: Are poll predictions made on personality rather than policies?

David Kurten: When people make a poll, you can get different results by asking the question and framing the question in a different way. You know, sometimes it is a straightforward poll, such as, "who you're going to vote for?" But you get the polls, where you might ask the question, "given Trump did this, would you vote for Trump or Biden?" So then you've anchored the question into something that will perhaps sway people or sway a few percentage points of people into giving a different answer than if you'd have asked a straight question. But there's all kinds of tricks that pollsters use. They weight the polls so they don't use the raw data. They put them through some algorithm. And then they say, "oh, well, this group has got more weight than another group".

And that can swing the poll results by a few percentage points. And we've seen over the last four years, they were wrong on Brexit, they were wrong on the US election in 2016, they were wrong on the UK elections in 2017 and 2019. They were wrong in this election, predicting a massive, massive win for Biden. I believe, personally, Trump has won fair and square. But the counts have not all been called because they're dealing with these huge numbers of absentee ballots. And who knows how many of them are actually legitimate or not.

Sputnik: How can we expect this election to finish?

David Kurten: I think it's going to go on for weeks, because there'll be legal action. One way legal action, and this is going to go on for a very long time. And then I expect legal action is going to go on in Wisconsin, Michigan, and Pennsylvania for a very long time, because of the evidence of things not being done fairly in those states. If the courts have any decency whatsoever, they will give the election to Trump and they will take into account all of the shenanigans that have been going on in those states. I see that it may even go to the Supreme Court. And if it goes to the Supreme Court, I think ultimately, Trump will win because they will adhere to the Constitution.