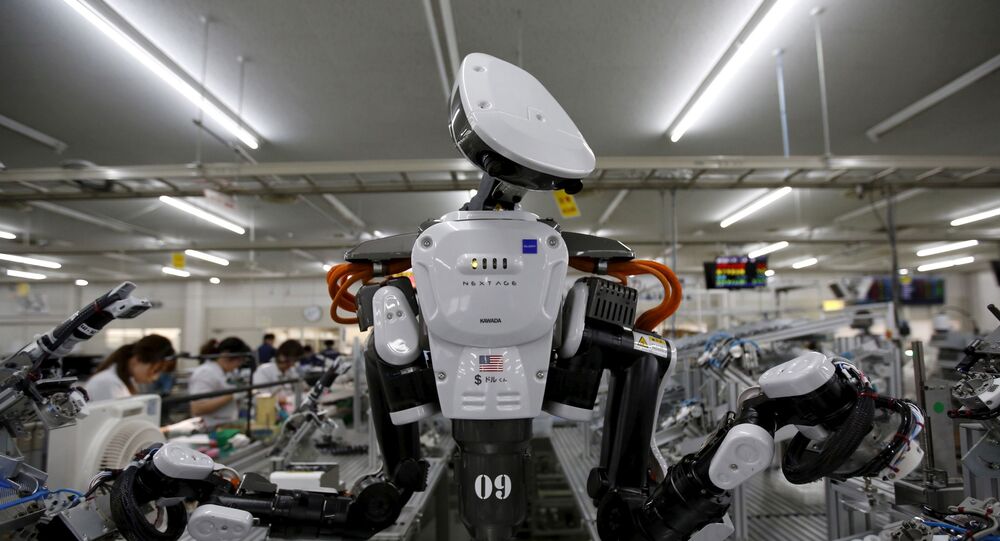 The rapid development of algorithms and robots is projected to have a seismic impact on the production of goods and provision of services across the planet. Many experts are concerned that if this 'Fourth Industrial Revolution' is not managed appropriately, millions of people will lose their jobs without suitable replacements on the horizon.

Michael Roberts has worked as an economist with investment research firms in the City of London for over 30 years. He explains to Sputnik that the pace at which new technologies are being developed and implemented are currently forecast to disrupt global employment in a manner not seen since the second industrial revolution.

Sputnik: What evidence is there that automation is likely to result in a substantial number of job losses?

Michael Roberts: Robots (machines that can do work currently done by humans) are expanding fast. Forecasts for robot expansion in the 2020s predict exponential growth. The number of industrial robots has already increased by a factor of three over the course of the last decade, rising from a little over one million operative units in 2010 to a projected 3.15 million units in 2020.

Sputnik: How many people are likely to be impacted by these policies?

Michael Roberts: Several surveys of job categories reckon that 40-50 percent of existing occupations could be replaced by algorithms or robots in the next two decades

Management consultants at Mckinsey have forecast that automation could displace 53 million positions on the European continent alone by 2030, the equivalent of about 20% of the current workforce.

Sputnik: Why is it that so many jobs are expected to be lost?

Michael Roberts: The history of industrialisation is based on replacing labour with machines to raise productivity and reduce costs of production.

Sputnik: Which types of positions are most likely to be affected by this shift?

Michael Roberts: The biggest reductions in jobs will be retailing, manufacturing and food and accommodation services. And those hit the most will be those who have the least 'skills' and are paid the least. This could increase existing income inequalities.

But robots are also becoming capable of substituting for, or even outperforming, humans for many more skilled tasks, such as producing customised parts and medical implants using 3D printing technologies, diagnosing diseases, and assisting decision making, for example, by 'robot judges'; and already financial investment allocations.

Sputnik: To what extent might this all be over-hyped?

Michael Roberts: Three reasons. First there are many human skills that robots cannot yet replicate; particularly those requiring agility and speed (playing tennis!) or sensitive contact with humans. A combination of humans and robots may be necessary for some time.

Second, robots are expensive to introduce and do not last as long as human labour (approximately 11 robots per human is necessary over an employee's working life).

Third, profitability or using machines over labour is regularly put into jeopardy by periodic slumps in global investment and production. We are a long way from a fully robotic society, especially one where there is 'singularity' namely where robots are smarter than humans in all tasks.

Sputnik: Is it not possible that automation will also create new jobs that those who are made redundant can then take on?

Michael Roberts: Yes, the history of machinery shows that old jobs are replaced by machines but that leads to new jobs as new sectors expand - take the hi-tech revolution of the last 30 years.

Sputnik: You've argued that automation "will aim to reduce the workforce, increase hours for those still employed and keep wages from rising". Why is that?

Michael Roberts: The aim of employers in investment in machines in modern economies is to lower costs and raise the productivity of labour. Higher productivity should mean more value created for less work, but the share of that extra value may not go to labour but instead be appropriated by employers. So there is a tendency for real wages to be held down.

Sputnik: Is this process inevitable?

Michael Roberts: It is not inevitable but a social choice. Shall we use the extra productivity from new technology to reduce working hours (less toil) as Jim Keynes once predicted over 80 years ago or just to save on wage costs with no reduction in hours?

Sputnik: Are there policies which can be implemented to mitigate against the negative effects of automation?

Michael Roberts: There must be financial and educational support from government and employers to help workers in the transition to new occupations. That means a planned response in education and public services. And policies at the workplace to ensure reduction in hours rather than just a reduction in jobs (work-sharing). The Finnish government is considering legislation for a four day week.