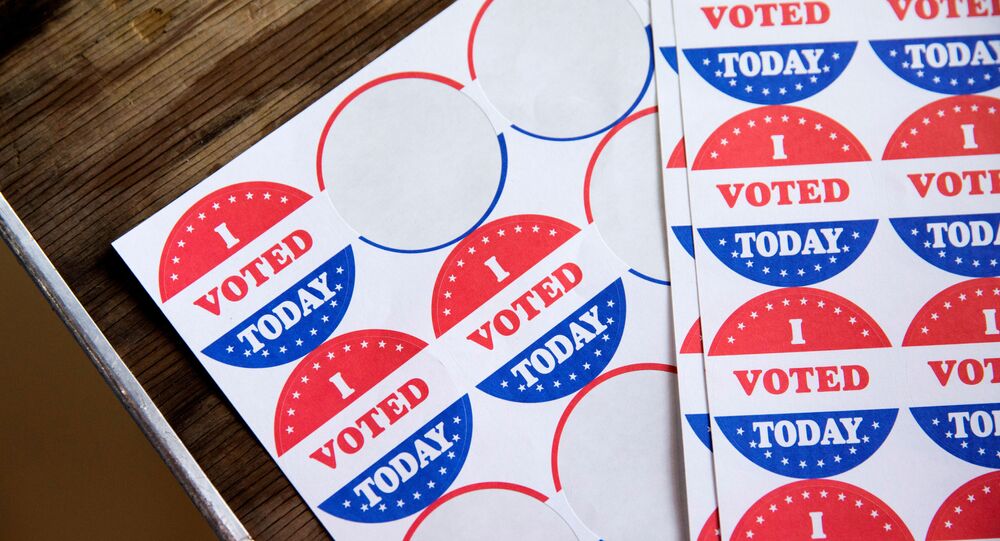 Why Do So Few Americans Vote in Presidential Election and Will It Be Different in 2020?

Voter turnout at US presidential elections was as high as 81 percent at one point in the 19th century. But in the modern era the highest it ever reached was 62.8 percent in 1960.

Some political pundits believe turnout at next month's US presidential election will be a record.

Russell Berman, writing in The Atlantic earlier this month, said: "There’s a chance the nation will wake up November 4 to at least one hopeful sign about the health of its democracy: a record number of citizens turning out to cast ballots."

Tom Bonier, the CEO of TargetSmart, a political data company, told The Atlantic: "The intensity of the electorate is without recent precedent."

We are going to get the highest youth voter turnout in American history.

​The argument goes that Donald Trump has polarised the United States so much that a record number of voters will cast their ballots, either to keep him in the White House or to turf him out.

This year is expected to see more voters than ever before casting their ballots by post.

But a record turnout in the modern era could be as low as 63 percent, meaning that more than a third of all Americans who are eligibe to vote will not bother.

Texas is about halfway through early voting today. Already, more than 5.3 million Texans have voted -- which is about 60 percent of total voter turnout in the state in 2016. pic.twitter.com/8qYFJMr1YL

​In 2016, when Trump beat Hillary Clinton, the turnout was only 56 percent (of people of voting age) and Pew Research says the US trails way behind other industrialised countries.

Belgium topped the league table with a turnout of 87 percent of the voting age population, although that could be because voting is mandatory there and Belgians can be fined for not casting a ballot, although the fine for a first offender is only 10 euros.

In Australia - where voting is also compulsory - 90.9 percent of registered voters cast a ballot but noticeably the turnout was only 78.9 percent of people of voting age, meaning that a lot of Australians do not register to vote.

When it came to registered voters turnout in the US was the third highest in the industrialised world - 86.8 percent, trailing only Luxembourg and Australia.

​So the truth is that once people register to vote in the United States they turn out in droves.

The problem is that far too few of them do register to vote - especially among lower-income families and Black and Minority Ethnic (BAME) groups.

During the Jim Crow era, white politicians and officials in the South deliberately made it hard for black people to register to vote.

Civil rights legislation passed in the late 1960s made “voter suppression” harder but it has not gone away entirely.

The Biden campaign - like many Democrats before them - have run registration drives in a bid to increase the number of African-Americans, Latinos and other target groups who are registered to vote while Trump and the Republicans were accused of voter suppression in 2016.

Another factor is that in most US states people convicted of a felony are not allowed to vote even when they come out of prison and in three states - Iowa, Kentucky and Virginia - they lose the right to vote for life.

The percentage of those of voting age who do vote also varies wildly between states.

Americans are already voting. The election ends in 20 days. Here is what is clear:

VOTE TO END THIS INSANITY!!!!

The worst offender of all though was Hawaii, where only 38.3 percent of people of voting age bothered to vote.

The reasons for Hawaiians’ apathy are unclear - is it that, being thousands of miles from the American mainland, they feel less engaged with the political process? Or it could be the tropical weather which makes them less inclined to bother than in frigid Minnesota?

Oahu already has almost a third of ballots returned, and turnout now more than halfway to state record from 2008 (when home state Obama was on ballot) #Hawaii #Vote #Election2020 @KITV4 https://t.co/tIwULvQ6MW

​Civilbeats analysed the turnout district by district in Hawaii and found that the areas with the lowest voter turnout rates tended to be lower-income, rural and had high immigrant, Native Hawaiian or Pacific Islander populations.

Kuhio Lewis, CEO of the Council for Native Hawaiian Advancement, told the Civilbeats website: “A good number of Hawaiians just don’t connect with the American system.”

He said civic engagement in the islands has increased in recent years, partly as a result of protests against a US$1.4 billion observatory on Mauna Kea - which is considered sacred to Native Hawaiians - and more indigenous people are running for office.

"All of this is culminating in 2020. I hope that translates to greater turnout this year," said Mr Lewis.