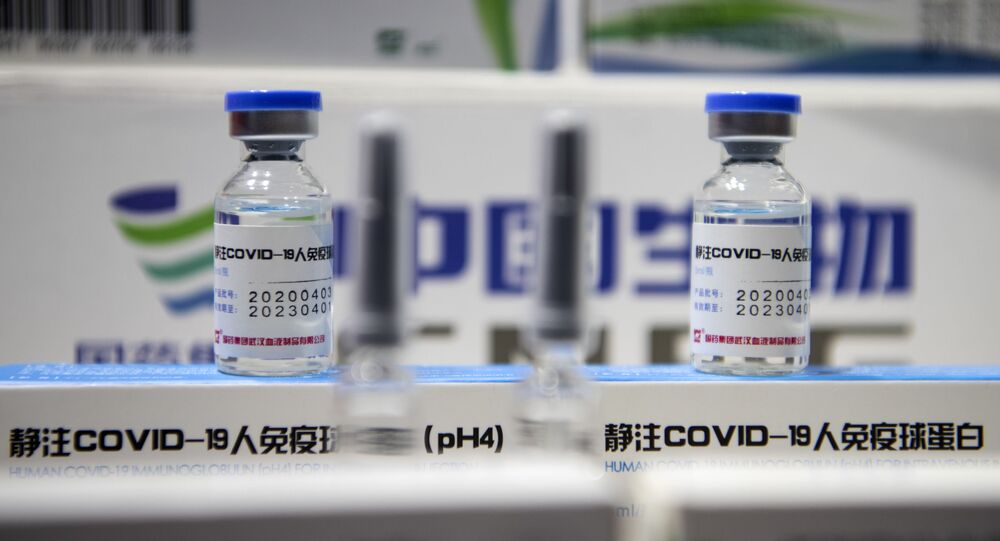 COVID-19: China Competes With the US for Brazil Vaccine Market

Political and diplomatic controversy over a Chinese COVID-19 vaccine has not stopped Brazil from including the drug in the nation's immunization programme. The Brazilian government reportedly seeks to purchase some 46 million doses of the vaccine, making it “the vaccine for Brazil.”

Brazilian Health Minister Eduardo Pazuello signed a letter of intent with the state of São Paulo to purchase 46 million doses of the CoronaVac vaccine, developed by China’s Sinovac Biotech. The vaccine is being developed in partnership with Instituto Butantan, located in São Paulo. The biomedical research centre will also help test and produce the vaccine, according to one of the country’s leading newspapers, the Correio Braziliense, which specified that the document’s signing took place during a Minister of Health videoconference with the governors of 27 Brazilian states.

The newspaper recalled that there were disagreements between Brazilian President Jair Bolsonaro and São Paulo Governor João Doria over the Chinese vaccine. The letter of intent signing put an end to speculation that the federal government might resist purchasing the Chinese vaccine due to these differences.

The São Paulo governor pushed the Sinovac-Instituto Butantan deal in his state, touting the vaccine as safe and effective, while participating in a press conferences to announce preliminary clinical trial results.

Brazil previously signed a contract to purchase 100 million doses of the Oxford vaccine. Meanwhile, the Chinese CoronaVac is expected to be the first vaccine to be available to Brazil, as Oxford suspended testing in September after volunteers developed unexplained painful symptoms. The Chinese vaccine is currently undergoing phase three trials. The product is expected to be purchased by the end of the year, after its registration and national vaccination will reportedly begin in January.

The Brazilian president referred to the Chinese vaccine as a drug from “that other country,” opposing its use and pushing for the Oxford AstraZeneca vaccine for the nation;s immunization programme.

Pyotr Yakovlev, the head of the Centre for Iberian Studies at the Institute of Latin America Studies of the Russian Academy of Sciences, pointed out that Bolsonaro retains his anti-Beijing stance.

"Even before taking office, Bolsonaro made quite harsh and impartial statements about China. His saying that “China is buying not in Brazil, but it is buying Brazil” has become internationally famous. Having become president and got the facts straight, he adjusted his position; however, there’s still anti-Chinese sentiment in his speeches and statements. Therefore, the vaccine incident fits into this narrative. Started by [US President Donald] Trump a few years ago, the trade wars, primarily against China, will certainly spread to drugs against the coronavirus. This promises to be a huge market and a large international business. We will repeatedly see attempts by the United States and, perhaps, some other countries to oust competitors from the largest and most attractive markets. Brazil, which has been hit hard by the pandemic, is one of the largest markets for this type of drug. Therefore, there is already a struggle for it; and this struggle will escalate."

Arguing With China is Not in Brazil’s Interest

This is not only about the pharmaceutical market, according to industry and political observers. The United States stepped up its offensive against Brazil to oust China, Brazilia's largest trading partner. On 20 October, the Trump administration promised Brazil $1 billion to fund imports of US goods and services, especially in telecommunications and 5G. At the same time, senior US officials urged that Chinese investment in Brazil be closely monitored, including ongoing actions by Beijing to expand its influence in Brazil through the sale of Huawei 5G technology. At a US Chamber of Commerce event, US Trade Representative Robert Lighthizer asserted that there was a Chinese element in everything the US was doing in Brazil, which is of great concern. Having become Brazilia's largest trading partner, Beijing took an important step in the country, Reuters reported, citing the US official. He pledged to continue the pressure, expressing the hope that Brazil would move with the United States.

Next year, Brazil plans to auction 5G frequencies to telecom companies operating in the country. Many are already buying Chinese equipment and technology solutions, primarily from Huawei, and would like to continue doing so, considering the significantly cheaper price. Meanwhile, according to sources in the Brazilian presidential administration, Bolsonaro seeks to bar Huawei from participating in Brazil's 5G network.

Diego Pautasso, a professor at the Military School of Porto Alegre and a specialist in international relations between BRICS states, did not rule out that, given Bolsonaro’s looking up and even obedience to Trump administration directives, he would ban Huawei activities in the Brazilian market, as other US allies have done, in particular the UK, Japan and Australia. The expert also believes that Brazil’s decision will come at a price. He recalled that while Beijing accounts for 40% of Brazilian exports, the US counts for only 8%. “The Chinese won’t accept such a refusal without any diplomatic consequences,” Pautasso claimed.

Xu Shicheng, from the Institute of Latin American Studies at the Chinese Academy of Social Sciences, agrees with the Brazilian expert, pointing out that a complete ban on Huawei by Brazilia could cause a negative chain reaction. The expert referred to the Brazilian president as a pragmatist, expressing confidence in his ability to balance his country’s diplomatic relations with Beijing and Washington.

“China is currently Brazil’s largest trading partner, with over $80 billion of investment in the country. Goods that China imports from Brazil, such as soybeans, iron ore and oil, are not in demand in the United States. Despite the pandemic, Brazil’s exports to China are growing, which reflects their need for each other and their cooperation’s ability to bring mutual benefits. This is equally true in the technology field. Huawei’s advanced technologies are widespread all over the world, and the United States is doing everything possible to hinder Brazil’s cooperation with the Chinese tech company. This is outrageous one-sidedness and hegemonism. I believe that Bolsonaro is aware of this. However, China is Brazil’s important trading partner; and a complete ban on Huawei could trigger a series of chain reactions that wouldn’t benefit the country. Bolsonaro has a right-wing political orientation, but he is a pragmatist, so he can balance Brazil’s diplomatic relations with China and the United States based on the country’s economic interests. He is unlikely to fully obey US orders.”

The US Dooms Brazil to Difficult Choices

According to Pyotr Yakovlev, Washington's pressure on Brazilia over its cooperation with Beijing will increase.

“Brazil faces a difficult choice; it’s extremely difficult to abandon its strategic partnership with China. The parties complement each other in economy and trade. Changing a partner who the country has developed mutually beneficial relations is contrary to Brazil’s national interests. Moreover, Brazil is one of the world’s few countries which has a surplus in trade with China. This is an attractive factor for the Brazilian state and business. Therefore, the United States puts Brazil in a rather awkward and difficult position. The country’s political and business circles are at a serious and not very pleasant crossroads.”

Brazilia has been under pressure from the Trump administration for several years due to its developing ties with Beijing. This pressure has now intensified, while calls to choose between the United States and China sound to some like an ultimatum. At the same time, Brazil, Latin America’s largest economy and a BRICS state, has consistently shape its own policies. A new area of cooperation with Beijing in the development, testing and production of a COVID-19 vaccine proves this.