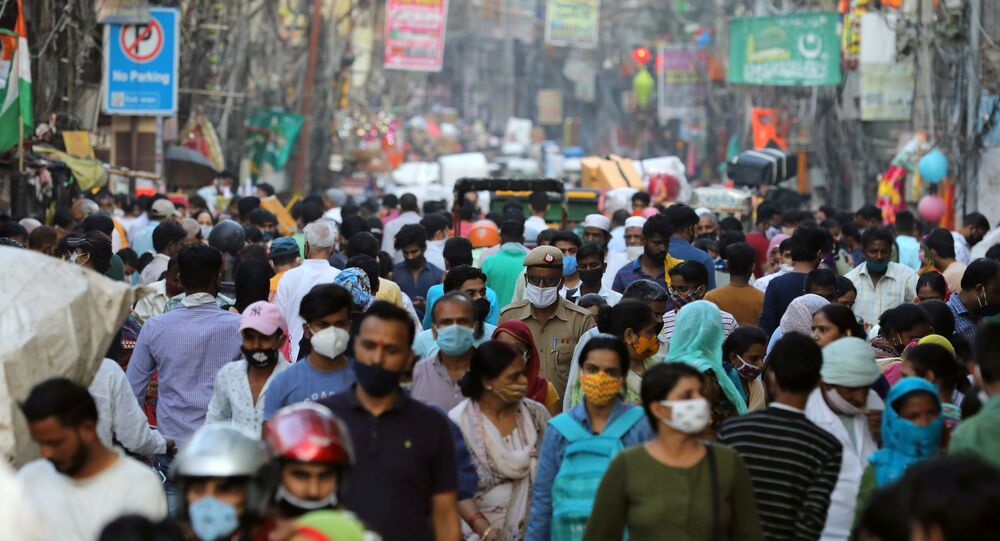 India to Benefit From US Covid Stimulus But Economic Divide Remains a Concern, Analysts Say

The US government rolled out an economic stimulus package worth $2 trillion in March, as the Covid pandemic hit. Globally, stimulus worth estimated at some $11 trillion has been deployed to counter the economic impact of the contagion. India pumped $266 billion for its own economy in May, amid the pandemic.

Expectations are rife that before the US presidential election in November, the country will announce a second large economic stimulus package, as the impact of the $2 trillion stimulus unveiled in March by the Trump administration is widely believed to be fading.

The upcoming Coronavirus relief, on which deliberations are currently going on between the US Speaker of the House of Representatives, Nancy Pelosi, and the US Treasury Secretary, Steven Mnuchin, is expected to be anywhere from $1.8 trillion to $2.2 trillion.

© CC BY 3.0 / Nick Youngson / Federal Reserve
US Federal Reserve’s Plan to Hold Benchmark Rates at Zero for 3 Years a Boon for India, Experts Say
Pelosi on Sunday gave a 48-hour deadline to the Trump administration to finalise stimulus contours, if they want the relief bill to be passed before election day.

Reacting to the development, global markets including the Indian bourses, were up today.

With the possibility of a new coronavirus stimulus in the US, there is a likelihood of a positive impact on the Indian economy, suggest experts.

They, however, maintain that Indian equity markets gaining dizzying heights from pandemic lows and economic growth plummeting are a “dangerous trend”.

Prof. Manipadma Datta, vice chancellor of the Teri School of Advanced Studies, told Sputnik, “Economic stimulus in the US will definitely benefit the Indian economy as it is the largest importer for the country.”

“But right now, our problems are different. We are suffering from jobless growth. Industries are curtailing jobs and educated youths are getting jobless.”

“India is behind Nepal in the hunger index. Our economic fundamentals are weak, while the share market is up. People having capital are taking away the benefits. Economic divide is a dangerous trend,” Datta added.

© AP Photo
'Hawkish' Donald Trump or 'Stickler' Joe Biden: Who Suits the Indian Economy Better?
India’s gross domestic product (GDP) has contracted by 23.9 percent in April – June this year as an impact of the COVID-19 pandemic.

For the entire financial year (April 2020 – March 2021), various agencies have projected that the Indian economy will contract by 10 percent.

Elaborating on how an economic stimulus in the US will stoke growth in India, Prof. Biswajit Dhar from the Centre for Economic Studies and Planning at country’s premier Jawaharlal Nehru University in New Delhi, told Sputnik that the creation of demand in the US may be beneficial for India.

Dhar opined that stimulus in the US may help India as pent up demand in the country “may benefit our exports”.

“Some of the sectors have done better in the month of September due to pent up demand. India after all has a trade surplus with the US. If people in the US have more money in their hands in the US, it is expected to jack up the international demand, which will be of India’s help,” Dhar said.

Low Interest Rates in US Will Benefit India

A former governor of India’s banking regulator, a spokesperson for the the Reserve Bank of India told Sputnik that another important factor of low interest rates in the US will benefit the Indian economy.

“The decision by the federal reserve to keep the benchmark interest rates near zero till 2023 is a blessing in disguise for the Indian economy.”

“Foreign funds will come chasing Indian bonds as well as equity markets, as they will get higher rates in India. This will also boost economic recovery post pandemic,” said the former RBI governor, on condition of their anonymity.