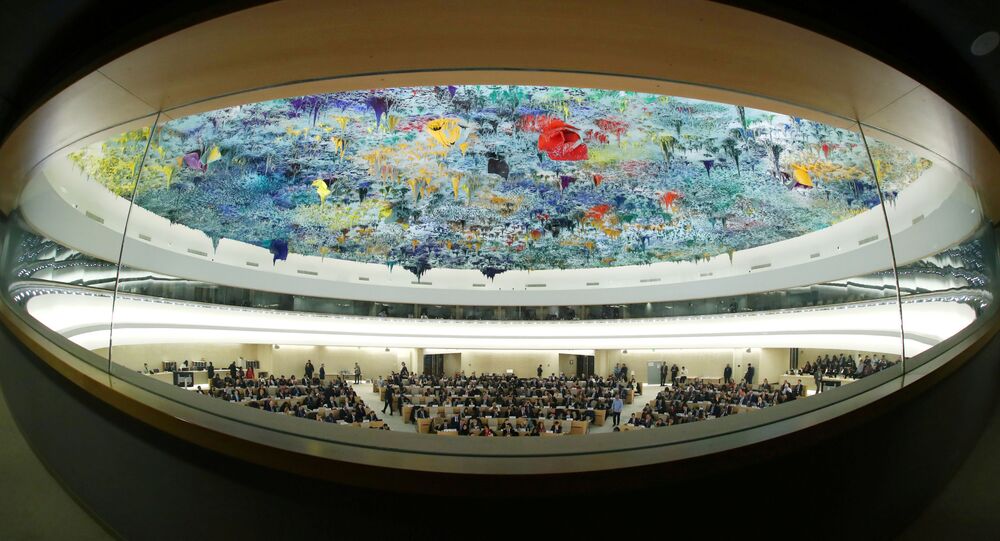 Why Without Russia or China, UN Human Rights Council Could Quickly Degrade Into a 'Lynch Jury'

On 13 October, the UN member states are expected to pick up countries which will sit on the 47-strong United Nations Human Rights Council (UNHRC) for the next three years (2021-2023). International observers have discussed Western NGOs' questionable criteria for keeping Russia, China, Cuba, and some other countries off the entity's board.

Ahead of the HRC elections, a group of non-governmental organisations issued a 30-page report, arguing that China, Cuba, Russia, Saudi Arabia, Pakistan and Uzbekistan are "unqualified" to serve on the UN human rights panel because of their "human rights record".

The report, published on 5 October by UN Watch, the Human Rights Foundation and the Raoul Wallenberg Center for Human Rights, claimed that "the presence of gross and systematic abusers of human rights on the UN Human Rights Council contradicts its own charter". The joint letter similarly insisted that Bolivia, Côte d’Ivoire, Nepal, Malawi, Mexico, Senegal, and Ukraine have "problematic human rights and UN voting records" stating that "only two out of sixteen candidate countries are qualified to be council members", namely the United Kingdom and France.

It's Arrogance to Claim One Owns 'Universal Template' of Human Rights

"There have been constant complaints over the years from Western members that some UN member countries do not 'deserve' to sit on the Council," says Tony Kevin, former Australian ambassador to Poland and Cambodia. "The vexed membership issue is coming to a head again now, with the possibility that the latest membership rotation could well see China, Russia, Cuba, Pakistan, and Saudi Arabia join as part of the incoming group of three-year members."

While the US withdrew from the council in 2018, dubbing the 47-member body "hypocritical and self-serving", Washington's European allies, led by the UK "continue to play active roles on the Council, trying to shape its work according to their values and prejudices", the former ambassador points out.

"It is simply Western governments’ arrogance to claim that they own the universal template of human rights standards to which other countries must 'catch up', if they want to be regarded as fully civilised," he observes, warning that "trying to keep countries like China, Russia, Cuba, Pakistan, and Saudi Arabia off the council would be foolish and self-defeating".

It appears that the issue of whether or not the country fits in the UNHRC board is based on how Western-friendly a country may be or relations between them at a given time, presumes independent American journalist Max Parry, referring to Saudi Arabia, that has recently been funding the UN aid agencies providing relief to the humanitarian crisis in Yemen. However, at the same time, Riyadh has warmed to relations with China and Russia, the journalist adds, suspecting that it is a far greater sin in the eyes of Washington's allies than any human right controversies.

Although some NGOs are very critical about the fact that the aforementioned states could be elected to the HRC's board despite not matching the "Western standards", one might ask which country in the world could show perfect results, notes Guy Mettan, Swiss politician and executive director of the Geneva Press Club.

"We know for instance that countries such as Afghanistan, Sudan, Congo but also the United States according to Julian Assange revelations, have committed crimes of war or crimes against humanity. But these countries have already been elected at the UNHRC board without any protests from NGOs," Mettan recollects.

One might admit that no country is above reproach with regard to protecting human rights, agrees Gilbert Doctorow, an independent political analyst based in Brussels. He asks rhetorically whether countries which were involved in the killing of "a million or so civilians" during the Iraq War of 2003 could be lauded as protectors of human rights, referring to the US and the UK, picked by the NGO report as a "qualified" HRC member.

"If the Human Rights Council consisted solely of countries pretending to be global champions of human rights, it would be a lynch jury, not a medium of diplomacy worthy of the United Nations host," Doctorow believes.

The so-called human rights record has long become a "soft power" weapon of the US-led NATO bloc, opines Professor Heinz Dieterich, director of the Centre for Transition Sciences (CTS) at the Autonomous Metropolitan University in Mexico City, and coordinator at the World Advanced Research Project (WARP).

"The defeat of the US in the Vietnam War (1975), after it had killed more than 4 million people in Indochina, severely weakened its world domination capacity," the professor elaborates. "In order to restore its capabilities and supremacy, post-defeat president James Carter (1977 - 1981) redefined US foreign policy tools, converting 'human rights' and 'democratic values' into the foremost public instrument of US imperial policy."

After the collapse of the Soviet Union, the Cold War era tools have not been shelved but were instrumentalised against emerging China and Russia, according to the academic. After a series of futile attempts to balcanise the two countries through market economics and military encirclement, "the Obama presidency re-employed Carter´s strategy with new aggressiveness under Secretary of State Hillary Clinton´s 'smart power' discourse (2009 - 2013): the usual combination of hard power and soft power (lies and misleading claims) on democratic values and human rights."

When it comes to human rights, "the US is certainly one of its most serious offenders in all categories as is evident in Palestine, Iran, Cuba and the system of institutionalised racism and poverty in the US," argues Dieterich, suggesting that the real goal behind the "sheer hypocrisy" of Western states and their subservient NGOs who compiled the report in question, is to "maintain their monopoly of ideological control of the UN and the global system".

UNHRC Must be Representative, Otherwise It is 'Doomed'

After the collapse of the USSR and the unipolar period, the world is witnessing a long phase of transition while the UN is looking for a new function in a world that changes rapidly, admits Tiberio Graziani, head of the Italy-based Vision and Global Trends International Institute for Global Analyses.

The UN, an organisation born at the end of the Second World War, was designed to maintain balance between the world's powers, he underscores, viewing Russia, China, Saudi Arabia, Cuba or Pakistan's UNHRC membership as a positive development.

"In fact, the UN Human Rights Council would be enriched with culturally different points of view; it could become a platform for discussing and reflecting on the very conception of human rights, beyond the ideological interpretation that currently characterises it," Graziani believes.

The inclusion of countries with diverse cultures and concerns only strengthens the Council by providing a forum to address issues and build a greater understanding of issues that may be involved, echoes Earl Rasmussen, executive vice president of the Washington-based Eurasia Centre think tank.

"Part of the strength of the UNHRC is its diversity by ensuring equitable geographical representation while taking into account religious and cultural aspects", he insists. "Membership is laid out in the founding documents."

Furthermore, the UNHRC is "above all else supposed to be representative" of the whole UN membership, with its wide diversity of national approaches to human rights, highlights former Ambassador Tony Kevin.

"All UN representative bodies must maintain their universal representative character if they are to thrive and be useful," he says. "This is what the UN is about.  If this truth were to be abandoned, the organisation would be doomed."