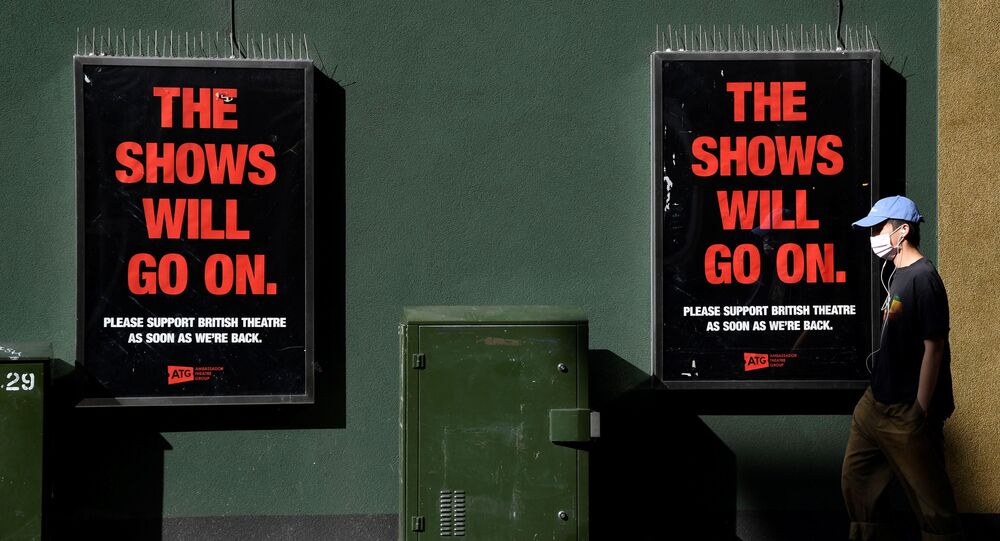 Many Jobs Will Be Unviable Under UK Support Scheme, Including in Creative Industry, Prof Says

The government’s new “winter economy plan” marks a shift in government rhetoric from “jobs retention” to “jobs support”, as the new plan focuses on so-called “viable” jobs, rather than protecting jobs in general.

Holly Patrick, a lecturer in human resource management at Edinburgh Napier University, says the pandemic has had a particularly severe impact on freelancers and the creative industry.

Sputnik: Firstly, how damaging has the pandemic been for the creative industry?

Holly Patrick: Overall, it's been very damaging, but the impact has been different, depending on how the creative product is delivered. So it looks slightly different across different industries. For example, those industries which relied on performances and exhibitions have been really badly hit as a result of the lockdown and of social distancing measures. Similarly, those which relied on trade fares, for example, or retail - although that's beginning to pick up just now - that was almost a complete standstill for a while as well. Whereas we see that some industries where the product is sold direct to the consumer, for example, in some of the areas of publishing, the effect has been a bit less. But also there's a reliance on other industries, for example, many creatives saw their work disappear, the wedding industry stopped, as the conferences and events industries shut down. So some industries have been in almost a complete economic shutdown since March, for example, theatre.

Sputnik: How has the pandemic affected creative freelancers?

Holly Patrick: Well, many of the people we spoke to in our research had all their work cancelled in their diaries for the next three months, cancelled within days of the first lockdown being announced in March. And this had a particularly severe effect on freelancers, because, as you'll know, many were not employed full time. Well, they weren't employed for much of their time, so they couldn't be furloughed, or the employers chose not to furlough them. Some had so little profit from their freelance businesses that the grants that they did receive weren’t meaningful.

And of course, many fell through the cracks completely of government funding, perhaps because they were newly self-employed, new graduates would fall into that category, for example, or some had less than 50% of their income from self-employment because they were working multiple jobs. And of course, those extra jobs that people were working in order to try and top up what they were earning from their freelance creative careers, they often dried up as well, because there were jobs in venues like in the Lyceum, or in hospitality, for example. So they were left without any way of making money in some cases.

Sputnik: Will many in the industry have to make alternative career plans?

Holly Patrick: Yeah, I mean, I think regardless of the specific words the chancellor used in relation to the new jobs support scheme, the truth is that because of the way that schemes work, it will de facto consider many jobs to be unviable, and a number of them will fall within the creative industry. And the question is, how long can people survive on Universal Credit or on handouts from their family or on even a partner's furloughed income, particularly when rent and mortgage relief schemes are either ended or coming to an end soon. And it's made worse just because it's completely unclear when the government will be able to lift social distancing measures. And for many people in the creative industries, it's still not clear how they can deliver their products in a way that is economically viable while adhering to social distancing measures. And a lot of creatives are upskilling, they're trying to move their work online to digital to find new ways of presenting it.

But there is still a question over how many customers are ready or willing to pay for that kind of work, how many people want to pay to see a concert online, for example, or to watch a play through YouTube. So for some, this has also shown that the industry had a number of pre-existing problems. For example, freelancing - it's been quite clear from the pandemic, how precarious that is. You know, when organisations shut down, although some members have full-time staff may be furloughed, but freelancers may be left with nothing. And there's a question over whether many creative freelancers are well enough paid to be taking that risk. And this is something that groups such as the Freelance Task Force are taking up and they're, you know, pushing back on organisations to say when the industry starts up again, we need to have this conversation about how we make sure that it's fair for freelancers.