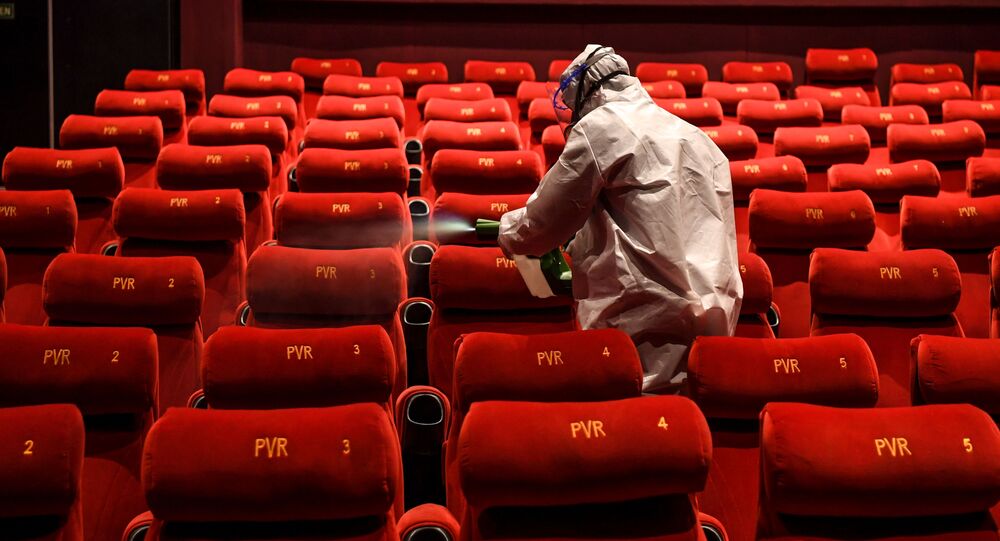 Since the start of the COVID-19 pandemic, cinemas all over the world have been closed and social gatherings prohibited. The pandemic has seriously affected the industry, forcing film companies to halt production and postpone the release of movies.

Christopher John Chandler, a programme leader for film and television at the University of Hertfordshire, has shared his views on the cinema industry during the COVID-19 pandemic.

Sputnik: Are we seeing the death of cinema as we know it?

Christopher John Chandler: I think that is unlikely; the cinema industry was buoyant before the zombie apocalypse came in and blasted us all out of the water, before COVID came along. So we're not looking at an industry that's teetering on the brink and this is just giving it one push over the edge. There are huge amounts of money, both in the United States and internationally, invested in films for cinema, both in terms of the volumes of production and in terms of the physical real estate, of cinemas. I think that the challenge is more going to be whether some smaller venues are going to survive, rather than whether cinema itself is going to survive.

Sputnik: Will more movies be released and streamed online as a result of smaller cinemas not being able to show blockbuster films?

Christopher John Chandler: If we look at Disney and Mulan. Mulan, as I'm sure you know, was originally going to get a cinema release and went straight onto Disney Plus, onto Disney's new streaming site. However, other Disney content, which is similarly queuing, waiting for a date where they feel brave enough to release it, hasn't followed the same path. There may be all sorts of reasons for that. But I wonder if it is because Disney didn't get the returns for Mulan going straight to streaming that they'd hoped for.

Part of the economics of film in general is that cinema is almost a loss leader for watching films on other platforms. I mean, back in the day, it used to be that you made your big money out of selling DVDs of a successful film. And I think that's still really important that something which drives viewers to Disney Plus is a combination of hit series and movies which already have a profile, and you get that profile by sticking them in the cinema. I don't really see, for big films, that disappearing.

Sputnik: Do you believe that there still is a demand for the cinema, a demand for the movie experience that maybe, as you say, Netflix and other streaming services haven't been able to replicate and that people still want to go to the cinema?

Christopher John Chandler: I think so; I think that, just to state the blindingly obvious, we're all human beings, we're social animals, we like to go for a nice night out. And I think we all recognise that qualitatively there's a huge difference between me and my partner sitting on the sofa and watching something on Netflix, and going for a night out at the cinema, and even watching the same thing - a night out is a night out and is something we enjoy.

Sputnik: But what more, if anything, can be done to help cinemas in the predicament that they find themselves in with the ongoing pandemic?

Christopher John Chandler: I think there's a short-term issue, particularly, as I say, for smaller operators, rural market-town Britain has a lot of either very, very small chains, or what you might call owner-occupied cinemas, where the cinema is one venue which is genuinely independent - and they, I think, really need help. If they're closed, they're still paying their business rates and they're still having to maintain the fabric of the building.

© CC0
Like a Zombie: Top Korean Movies About Living Dead You Need to See
And if they're open, their costs have increased, and their audiences certainly at the moment have reduced, with all the cancellations or postponements of particularly the bigger films. They're not getting those high-spending films through the doors. I think there's a need for some sort of support for those smaller venues. I think Odeon and Cineworld and the Vue, I suspect can weather the storm even though it is costing them a lot of money.

I think they've got the resources, but [for] smaller operators, more of something probably does need to be done to support them temporarily through these hard times.

Sputnik: Do you think COVID has destroyed the already fraught relationship that exists between cinemas and distributors?

Christopher John Chandler: There's always been, from time to time, tension between distributors and cinemas; there is a slightly arcane concept of windows - it's the interval between a film being released in the cinema and the point at which it's available to go onto other platforms, onto television, onto streaming services. Cinemas want that to be as long as possible.

They want at least 12 weeks as a window so that they can exploit films, they can make their money. And particularly, I think for independent cinemas, this is an important thing, because, without a long window, you can't have a film become a word-of-mouth success - what we call "sleepers", a film that doesn't do an awful lot on release, but gathers its audience as time goes by. So there's always been this tension between distributors and exhibitors. And I think part of the Cineworld announcement is a certain frustration with distributors that they're not giving them the films that they believe will bring the audiences back.