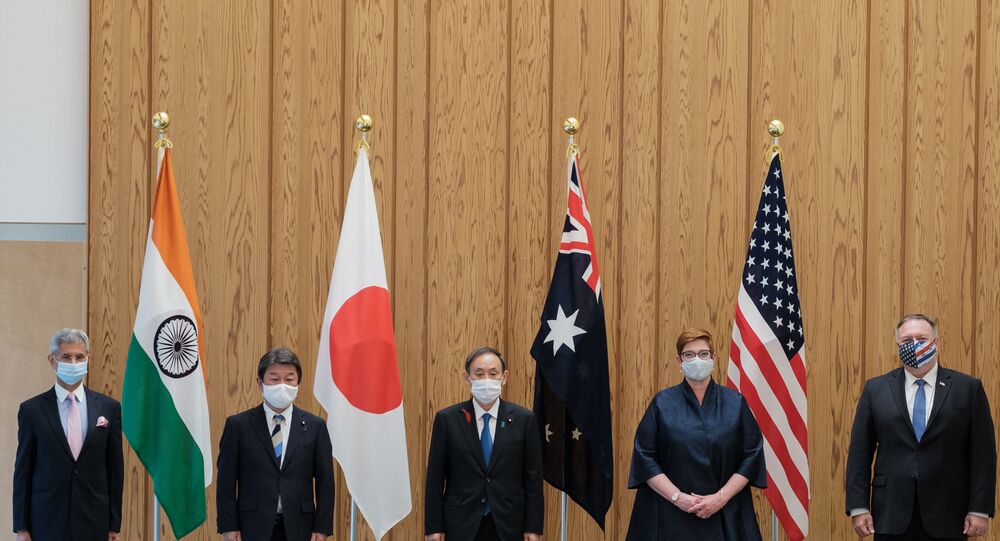 Australia’s High Commissioner to India Barry O’Farrell said that Canberra’s annual budget released on Tuesday had a "strong focus" on growth and stability in the Indo-Pacific region. He further underscored that Canberra had earmarked $62.2 million to advance the Australia-India Comprehensive Strategic Partnership, sealed earlier this year.

Australia's policy attitude towards the Quad has "changed drastically" since last year and its perspective towards maritime security in the Indian Ocean region is more in sync with India than before, former Indian diplomat Rajiv Bhatia told Sputnik.

"As far as the Royal Australian Navy being part of the Malabar Exercise is concerned, it is New Delhi that has to take a call", said Bhatia, who is now a distinguished fellow, Foreign Policy Studies Programme at  the Mumbai think tank Gateway House.

The foreign policy expert claimed that Australia’s participation in the four-nation Malabar Exercise, the only one to take place among the four democracies, may be announced later.

“As I see it, such announcements are not made in formal statements. But we seem to be close on getting Australia back on board", said Bhatia.

Bhatia, who served as India's envoy to Myanmar, reckoned that Australia's evolving attitude towards the Quad was reflected in the "bold" statement by Canberra on Foreign Minister Marisa Payne's participation in the four-nation talks in Tokyo on Tuesday.

"Ministers reiterated that states cannot assert maritime claims that are inconsistent with international law, particularly the United Nations Convention on the Law of the Sea (UNCLOS)", reads a statement by Australia's Department of Foreign Affairs and Trade (DFAT).

Besides this, Canberra also called upon other countries to "refrain from malicious cyberspace activity". Australia's Australian Broadcasting Corporation (ABC), citing official sources, accused Beijing of large-scale cyberattacks on Canberra in June. According to reports in the Australian media, the cyberspace attack was triggered by Australian Prime Minister Scott Morrison calling for an inquiry into the origins of the coronavirus, a demand that also triggered economic sanctions from Beijing.

Bhatia recalled that a "shared commitment" to upholding the UNCLOS was also one of the dominant outcomes of the virtual summit between Indian Prime Minister Narendra Modi and his Australian counterpart Scott Morrison in June.

An international tribunal in 2016 rejected Beijing’s claims over the u-shaped, nine-dash line in the South China Sea, as it sided with the Philippines. However, China’s maritime neighbours have complained that Beijing continues to disregard the verdict.

China accuses the United States of intervening in regional territorial and maritime disputes, "constantly flaunting its force" and strengthening its military deployment in the region. The Chinese Foreign Ministry suggested that US actions "interfere" with China and ASEAN nations’ efforts to resolve disputes through negotiation.

Bhatia underlined that Australia’s participation in the Quad was a shot-in-the-arm for the grouping, given the country’s location at the crossroads of  the Indian and Pacific oceans.

"The role of Australia as an Indian Ocean power is crucial. It is also a major guardian of the sea-lanes of the western Pacific Ocean", remarked the ex-diplomat.

Australia was one of the founding members of the Quad grouping, when representatives from four countries, including Japan, the US, and India, met on the sidelines of the ASEAN regional forum in Manila in 2007.

The Royal Australian Navy’s participation in military drills with three other Quad partners and Singapore in September 2017 triggered a strong reaction from China, Canberra’s largest two-way trading partner. Reportedly, Canberra, under former Prime Minister Kevin Rudd, pulled out of the Quad altogether after a meeting between the foreign ministers of Australia and China in 2008.

It was only in 2017, after Canberra released its White Paper on Foreign Policy, that Australian officials resumed official contacts with their counterparts from other countries. The first round of ministerial level consultations between the four countries took place on the sidelines of the UN General Assembly in New York last year.