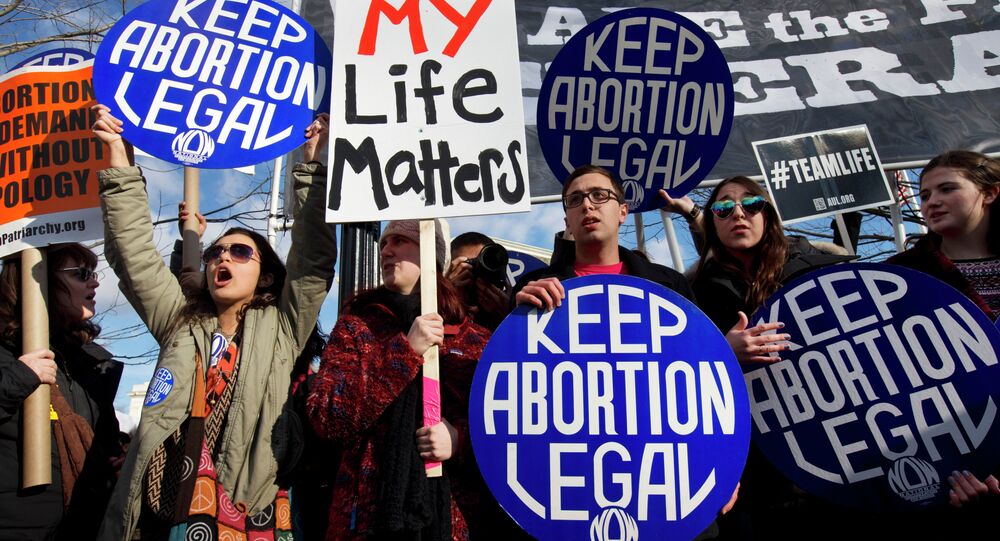 Following the death of US Supreme Court Justice Ruth Bader Ginsburg, it seems likely that US President Donald Trump will get to nominate a third justice for the court. However, two experts told Sputnik the conservative court is likely to continue turning abortion rights into a state issue instead of mounting a head-on assault to abolish them.

Trump has promised to only nominate anti-abortion candidates, so the possibility of a powerful 6-3 conservative majority on the court has only highlighted the dangers posed to a woman’s right to an abortion guaranteed by the 1973 ruling in Roe v. Wade.

Joia Jefferson Nuri, communication specialist for In The Public Eye Communications, and China Dickerson, national political director for Forward Majority, told Radio Sputnik’s Political Misfits on Friday that conservative judges seem to have settled on the idea that abortion is a states’ rights issue - an arena where conservatives can put up roadblocks to frustrate women’s ability to exercise their abortion rights.

“It was essentially a privacy case,” Nuri told hosts Bob Schlehuber and Michelle Witte about the 1973 court case. “It has become this banner to lead the reproductive rights organizations since it was first ruled on, but it was also a place where it allowed a lot of states’ rights, too, within the ruling, that people didn’t quite understand and we haven’t quite focused on over the last 20 years.”

“So, Roe v. Wade has become this place where women have decided … that that’s the marker for the rights of women’s choice throughout time and that it should not be touched,” Nuri said, noting that since the 1973 ruling, a potential Supreme Court justice’s political “litmus test” has been whether they supported or opposed Roe vs. Wade.

However, conservative politicians have also opened up a second offensive against abortion rights at the state level, where rather than ban the practice outright, they have severely restricted access to abortion, particularly by making the requirements of operating an abortion clinic so demanding that almost no facility in their state can afford to stay open. This legal labyrinth is composed of Targeted Regulation of Abortion Providers (TRAP) laws.

“There are some states that say an abortion clinic has to be able to duplicate an emergency room. And we all know that you don’t need a full-fledged emergency room to perform an abortion. It’s usually an in-and-out procedure in a doctor’s office,” Nuri noted. “They’re using their powers to get around the law.”

However, Dickerson also cautioned that “there’s a lot of grassroots fight that we forget about and we really need to support those organizations financially, emotionally, via social media, et cetera.”

Nuri noted that some of the potential replacements floated for Ginsburg, such as Judge Amy Coney Barrett from the 7th US Circuit Court of Appeals in Chicago, who is being widely touted by the media as the frontrunner of Trump’s short list, don’t seem to consider it important for the Supreme Court to consider the question of abortion as such.

“She dissented when Indiana courts tried to block an Indiana law mandating parental consent in order for a minor to have an abortion,” Nuri said, noting that in 2016 at Jacksonville University, Barrett said that the Supreme Court would likely restrict itself to interpreting the legality of new abortion restrictions and not seek to revoke the right itself. “She will make it a states’ rights issue,” Nuri said.

However, Nuri noted that abortion rights defenders fighting at the state level have suffered a series of defeats and setbacks in recent years because for many years, the focus - and thus the money - behind the nationwide movement to defend abortion rights has been on the national level, not the states.

If Democratic nominee Joe Biden wins the November election, however, Nuri said, “there will be pressure on him to go as far left with this judge as he possibly can go. I think he’s going to be under pressure to duplicate Ruth Bader Ginsburg.” Dickerson noted there is additional pressure for Biden’s nominee to be either a Black or Native American woman.