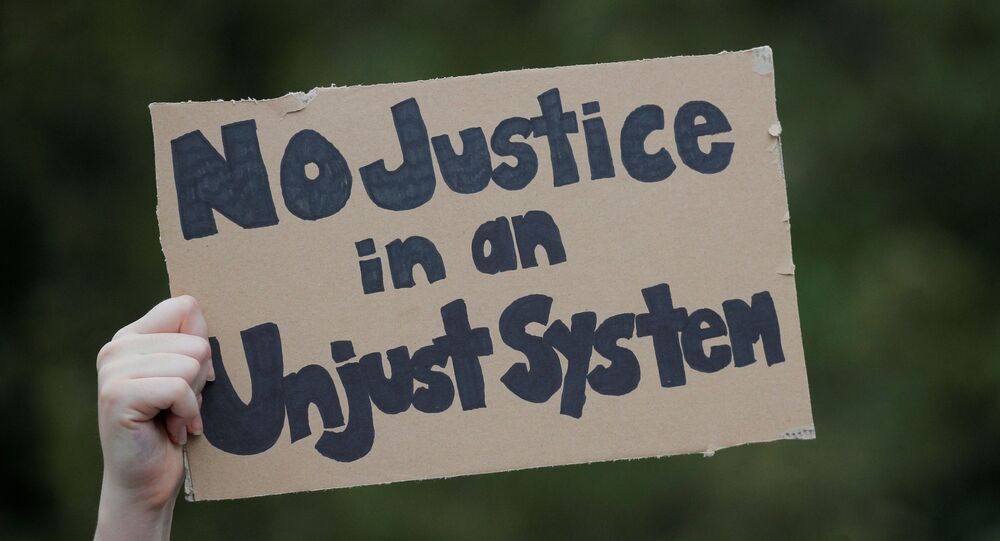 Kentucky Attorney General Daniel Cameron announced on Wednesday that only one officer, former Det. Brett Hankison, would be indicted in connection to the March 13 shooting death of Breonna Taylor, a 26-year-old Black woman. One expert tells Sputnik the emerging details on evidence provided to the grand jury proves "the whole system is broken."

Eugene Puryear, host of BreakThrough News and author of the book “Shackled and Chained: Mass Incarceration in Capitalist America,” told Radio Sputnik’s By Any Means Necessary on Thursday that the details surrounding Taylor’s case present the “perfect example of what people are saying in the streets about how it’s the system” that needs changing and “not just the individual officers.”

US President Donald Trump spoke glowingly of Cameron as he quoted him before abruptly leaving a Wednesday news conference for an “emergency” phone call.

“We asked you earlier about the Breonna Taylor case, can you comment now?”

Pres. Trump’s reads statement from Kentucky AG: "Justice is not often easy. It does not fit the mold of public opinion and it does not conform to shifting standards..."

Sunny Hostin, a former federal prosecutor, argued on Thursday that it does seem possible that an “indictment could have happened here against the officers,” because the prosecutor “controls the facts given to the grand jury.”

She further highlighted that Cameron, despite his appointment as attorney general, “has zero criminal trial experience.”

“If you are to be the top prosecutor of a state, you have to have that kind of experience. And when I look at this case and this indictment, it reeks of someone that doesn’t have that experience,” she argued. “And his explanation yesterday, quite frankly, didn’t make sense to someone like me.”

There has also been outrage over the fact that wanton endangerment charges were only leveled against Hankinson over gunshots that entered a home belonging to a white family, despite the fact that officers’ bullets were also fired into Taylor’s home, as well as the home of a Black neighbor.

Federal Bureau of Investigation ballistics analysis revealed that of the 20 shots fired by officers, the bullet that killed Taylor was fired by Det. Myles Cosgrove, who, along with Sgt. John Mattingly, avoided an indictment on Wednesday.

“To really indict these officers for murder would be to indict a system that allows the police to come, on basically no evidence, [and perform] a secret raid,” Puryear told hosts Sean Blackmon and Jacquie Luqman.

He detailed that this system allows officers, who are “armed to the teeth” and not made to announce themselves, to “wantonly shoot all over the place, kill somebody,” possibly kill others in nearby apartments and “just get away with it.”

It’s worth noting that Hankinson was removed from the Louisville Metro Police Department on June 23. According to his termination letter, the officer exhibited "extreme indifference to the value of human life" when he "wantonly and blindly" fired into Taylor’s apartment back in March.

Puryear argued that the single indictment of wanton endangerment lets the public know “that’s the only element” of the no-knock raid that may result in accountability.

“It lets you know right there that the whole system is broken, from top to bottom,” he stated.

Daniel Cameron today: “Criminal law is not meant to respond to every sorrow and grief.” pic.twitter.com/N7sCnplKCQ

He concluded by pointing out that prior to Cameron’s speech about how “justice is not often easy” and “does not fit the mold of public opinion” on Wednesday, he followed a different tune at the Republican National Convention.