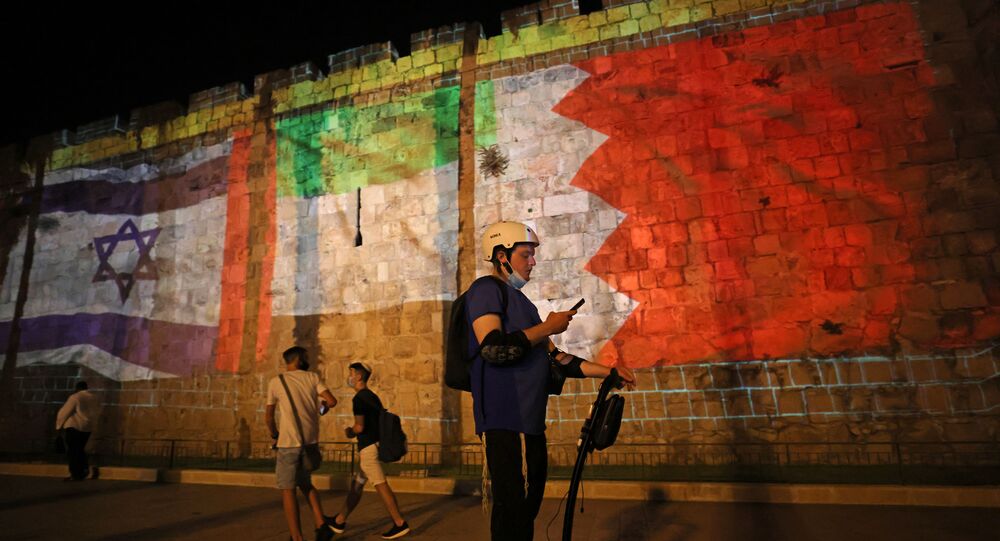 Even though the Egyptian public didn't approve of its government welcoming the deals between Israel, the UAE and Bahrain, a Cairo-based expert says the accords will be beneficial for the region. Apart from opening the door for an Israeli-Palestinian dialogue, it will also boost the chances of Egypt and Israel improving ties.

Egypt's President Abdel Fattah Al Sisi was perhaps one of the very few leaders, who welcomed the shaping deals between Israel, the United Arab Emirates and Bahrain and rushed to emphasise the benefits such pacts would bring to the Palestinians.

"I followed with interest and appreciation the joint statement between the US, the United Arab Emirates and Israel to halt the Israeli annexation of Palestinian lands and take steps to bring peace in the Middle East," he said on Twitter.

Egyptians Not Buying the Excuse

But for ordinary Egyptians, the decision to embrace the agreements instead of condemning them came as a total surprise.

"Egyptians were literally taken aback by the agreements," said Amr Zakariya, a Cairo-based expert, who specialises in Israel-Egypt relations.

"The disappointment stemmed not from the decision to normalise ties but from the mere fact that over the years it have been the Gulf states that slammed Egypt over its relations with Israel, and now they seem to be taking a different route."

Ties between Egypt and many Arab states, including those in the Gulf, have deteriorated following the decision of then-President Anwar Al Saddat's to sign a peace treaty with Israel.

© REUTERS / Tom Brenner
Israel, UAE, Bahrain and US Sign Historic Abraham Peace Accords at White House
Shortly after he inked that historic act in 1979, all Arab and Muslim states, with the exception of Oman and Sudan, severed ties with Cairo, expelled it from various regional organisations and recalled their ambassadors from Egypt in a bid to punish the country economically for daring to make peace with their perceived common enemy.

Now, however, the UAE and Bahrain are presenting their pacts with Israel as a calculated move that was designed to protect the Palestinians and save them from "Netanyahu's annexation plans".

However, the Egyptian public finds it hard to swallow.

"The pacts were done only because the Gulf is afraid of Iran. That's why Egyptians look at it as a betrayal of the Palestinian cause. How exactly is it going to help them? The pact only shows that the PA is losing its support among Arabs and I don't see how Israel will now be pressured into solving the conflict," the expert explained.

Apart from the UAE and Bahrain, other Gulf countries are believed to be considering thawing the ice with Israel, with some reports indicating that Oman, Saudi Arabia, Morocco and Sudan are set to normalise relations with Israel in the near future.

These allegations were confirmed last night by US President Donald Trump, who hinted that five other nations were on their way towards normalisation. If true, Palestinians are likely to find themselves isolated, facing Israel on their own.

Opportunities Not to Be Missed

Although Palestinians might regard the current situation as gloomy, Zakariya says it still harbours several opportunities.

"To start off, it can open a chance for a direct dialogue between Israel and the Palestinians, and I really think the latter should seize this opportunity because the current halt of annexing parts of the West Bank will not hold for too long, and they will need to sit down for talks if they want to prevent that from happening."

Yet, it is much more than that. The shaping deals can also improve relations of Israel with Egypt, potentially turning the current "cold peace" into a warm one.

© REUTERS / POOL
Iran & Palestinians: Will Oman Become the Next in Line to Ink Deal to Normalise Ties With Israel?
Throughout the years, Egypt has made sure to abide by the clauses of the peace treaty, maintaining tight cooperation with Israel when it came to the security of the region.

However, that cooperation very rarely went beyond military ties, with Egypt preferring to keep a low profile when it came to boosting bilateral economic and cultural relations.

Even under President Sisi, who improved his country's relations with its northeastern neighbour, contacts on many fronts have remained lukewarm, primarily because Cairo wanted to avoid stirring anti-government sentiments that tighter ties could entail.

But now, as such powerful regional players as the UAE and Bahrain are joining the club of those that recognise Israel's existence, Cairo might want to use that opportunity to deepen its relations with Jerusalem.

"Egypt has always positioned itself as a pioneer and the leader of the Arab world and it will not want to lose that position to another state. Will that be enough to turn cold peace into warm? It might, as now Cairo will not be scrutinised for its dealings with Israel."