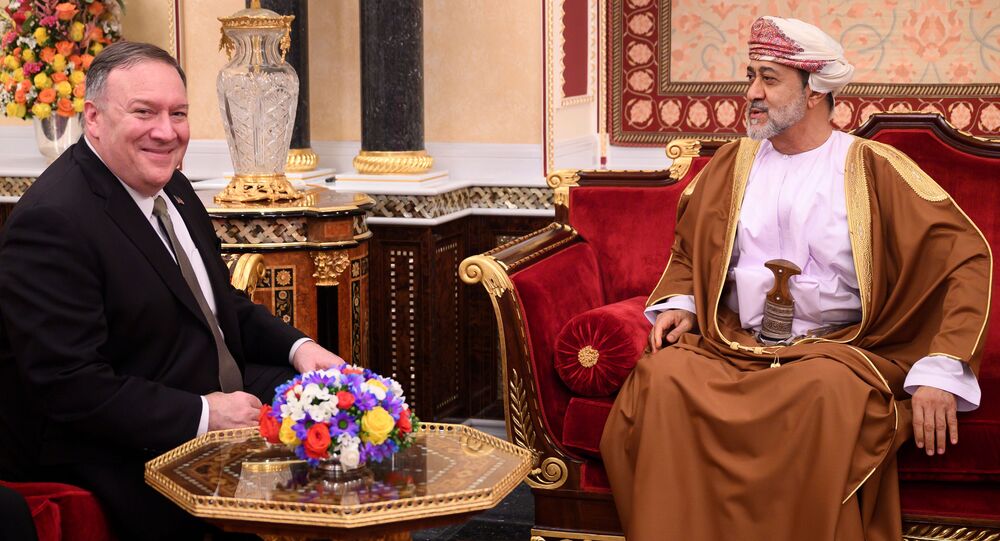 Although international observers name Oman as the next Gulf state to sign a peace pact with Israel, Omani political analysts have thrown this possibility into doubt, citing the longstanding relations between Muscat and Tehran as well as the still unresolved Palestinian issue.

The Sultanate of Oman is one of the few Gulf states that has praised Bahrain and the United Arab Emirates' normalisation deals with Israel. On Tuesday, an Omani representative was also expected to arrive in Washington for the signing ceremony presided over by Donald Trump.

“The Sultanate welcomes the initiative taken by the Kingdom of Bahrain within the framework of its sovereign rights and the Tripartite Joint Declaration on Relations with Israel”, a statement announced by Oman's state broadcaster on Sunday said, as quoted by The Times of Israel.

In late August, US Secretary of State Mike Pompeo made a stop in Muscat to meet with Sultan Haitham bin Tarik Al Said to "build on the historic momentum to advance regional peace and prosperity", according to the State Department's website. In mid-August, Israel’s Intelligence Minister Eli Cohen dropped a hint that Oman may follow the UAE's lead while speaking on the nationwide Israeli radio network Galei Tzahal (Army Radio).

Oman Has Its Own Vision of Achieving Peace in Mideast

While The Times of Israel remarks that Oman is seen by many "as another Arab country that could soon announce diplomatic relations with [the] Jewish state", The Arab Weekly speculates that the sultanate is already "preparing for [a] peace agreement with Israel", raising the question as to how Tehran would react to Muscat's decision to reconcile with Tel Aviv, given the longstanding relations between Iran and Oman.

Don’t hold your breath, says Omani political scientist and author Salim al-Jury, adding that there are no clear prerequisites for Oman to become the next Arab country to sign a treaty with Israel.

"The recent contacts between US President Donald Trump and the Sultan of Oman are the end of the meeting between the US Secretary of State and the Sultan during his recent visit to the country: I don’t think they should be associated with American manipulations around Israel. After all, the states have bilateral relations, they are developing them. So far I don’t see any prerequisites for negotiations with Tel Aviv and, moreover, for signing an agreement", he says.

"The two meetings that took place under Sultan Qaboos were an attempt to restore the peace process between Israel and Palestine. Perhaps, that has served as a kind of signal for Israel that the Arabs are ready to establish relations with Israel in exchange for a two-state solution", the Omani expert points out.

During Netanyahu's last visit to Oman, in February 2019, Omani Foreign Minister Yusuf bin Alawi highlighted that the Gulf state would not normalise relations with Israel until the foundation of a sovereign Palestinian state.

Salim al-Jury foresees that the situation in the region will change, being affected by the normalisation of relations between the Persian Gulf monarchies and Israel, but in no way will it harm the Palestinians.

“The normalisation of relations with Tel Aviv is an attempt to implement a project that would be something in between Jordanian King Abdullah’s initiative and the US 'deal of the century'. Such a scheme is likely to be quite beneficial for all regional players", the political scientist acknowledges.

However, Oman may have its own vision for achieving peace and security in the region, he stresses, adding that after all, officially, the country remains neutral. Besides this, the issue could be discussed at the Gulf Cooperation Council (GCC) to "take some unified line", the political scientist remarks.

Oman is unlikely to ink an agreement with Israel in the near term, as the sultanate’s domestic political mood is somewhat different from that of its neighbours, suggests Omani analyst Khamis bin Obaid al-Qutayty.

"It will be very difficult for Oman to come up with a clear decision", the analyst believes. "There are polar positions on this issue in the country, and their weight in domestic politics is about equal. Moreover, religious leaders spoke out against normalising relations with Israel, which is unlikely to be disregarded by the Sultan. In addition, we have excellent relations with Iran, which could be easily destabilised by the agreement with Israel".

Tehran and Muscat have long maintained special relations, making the sultanate Iran's closest ally in the Persian Gulf. Citing a UAE source Israel Hayom suggests that Oman is willing to normalise ties with the Jewish state, but fears that its ties with Iran would be severely harmed. The media outlet highlights that Oman's partnership with Iran allows the sultanate "to mediate a number of disputes that have arisen between Iran and Saudi Arabia, Bahrain, and the other Gulf states, as well as between Tehran and Washington".

However, according to al-Qutayty, no one knows exactly what is happening in the sultanate’s diplomatic circles, and whether a peace agreement with Israel was discussed with the Americans by Omani officials.

“Nevertheless, the Omanis have made their vision clear", he says. "Leaving them unheard and signing a 'peace agreement with the occupiers' against their will is a step doomed to failure for the government. After all, Israel doesn’t seek to stop occupying Palestinian territories and let them create their own state; what is peace for then? The Arab states won’t make any progress this way".