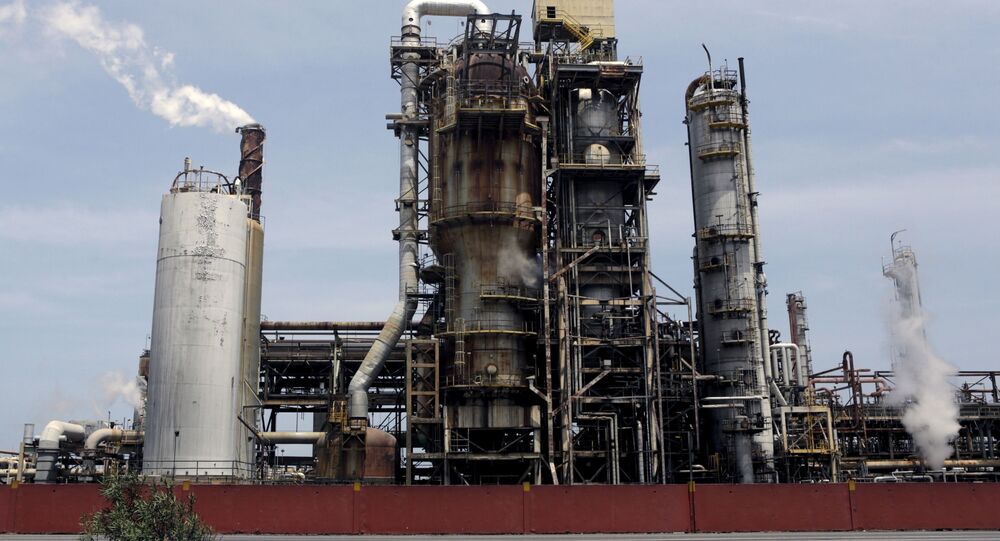 In the last two years, Venezuela has thwarted a coup attempt organised by opposition leader Juan Guaido, one attempt to kidnap President Nicolas Maduro, and energy outages reportedly caused by sabotage. These events were linked by Caracas directly or indirectly to the US, which has been seeking to unseat Maduro.

Venezuela President Nicolas Maduro reported on 11 September that the country's authorities captured a spy who was planning an attack on a refinery. He did not elaborate, but media reports suggest that the spy, a former US Marine and CIA operative, was targeting the Cardón refinery in the state of Falcón, which had only recently reopened its operations following a halt caused by sanctions placed on the nation by the administration of US President Donald Trump.

© AFP 2020 / VENEZUELAN PRESIDENCY
Handout picture released by the Venezuelan Presidency showing Venezuela's President Nicolas Maduro announcing in a televised message to the nation the extension, for the fifth time, of the state of alarm due to the COVID-19 novel coronavirus pandemic, in Caracas on August 9, 2020

Political experts interviewed by Sputnik opine that most of Maduro's statements should be taken with a pinch of salt, but, despite that, his latest sounds convincing, they add. This time, Maduro's claims have "logical foundations" as hitting refineries would only be reasonable in a scenario in which Caracas is struggling to overcome a domestic fuel crisis, according to Vinicius Vieira, an international relations professor at the University of Sao Paulo. Any action to undermine the Maduro government's ability to produce fuel will hurt his leadership, he adds.

"The several arrests last May, as an apparent foreign military incursion was aborted, furnishes further evidence about American undue interference on Venezuelan matters", Vieira said, referring to a May 2020 incident in which Venezuelan authorities detained several mercenaries seeking to kidnap Maduro, with two later identified as members of a private US military company called Silvercorp USA.

Any new operation in Venezuela might not only be a pretext for a crackdown on Maduro, but also a way of earning points for Trump's administration, ahead of his bid for re-election, the professor suggests.

No Chances to Resist Destabilisation Efforts

The Trump administration has admitted that it seeks to unseat Maduro, and closing sources of cash to undermine the country's economy are playbook tactics of US regime change efforts, Professor Heinz Dieterich, of the Universidad Autonoma Metropolitana, a former adviser to the late Venezuelan president Hugo Chavez, stresses. Dieterich, who studied US President Ronald Reagan's regime change strategies, says what is going on in Venezuela right now is a typical "destruction operation against vital infrastructures" of the country.

"This regime change policy includes financial and economic asphyxiation, energy suffocation, political isolation and the use of paramilitary and military action", the professor explains.

Dieterich believes that Maduro's government has "no chance at all" to resist White House attempts to destabilise the country. But, at the same time, it doesn't mean that the process can't be managed, the professor continues, suggesting that Maduro could resign, while recruiting Cuba, Mexico and Uruguay, supported by China, Russia and the EU as middlemen to organise a new election without US involvement. Dieterich explained that this way interests will be balanced, as Cuba supports Maduro, Uruguay opposes his rule and Mexico has so far stayed neutral in this conflict.

However, such a scenario is questionable, since Maduro won his hotly-contested 2nd presidency just two years ago. He repeatedly turned down calls of then head of the opposition-dominated National Assembly, Juan Guaido, and the western governments to step down. The latter supported Guaido's January 2019 claim for an interim presidency despite no legal basis for the position. At the same time, Russia, Turkey, China and Iran supported Maduro and condemned the West's attempts to meddle in the domestic affairs of the Latin American state. Guaido is later siad to have organised a coup attempt at the end of April, unsuccessfully calling on the military to take his side and help him overthrow the government and the elected president.