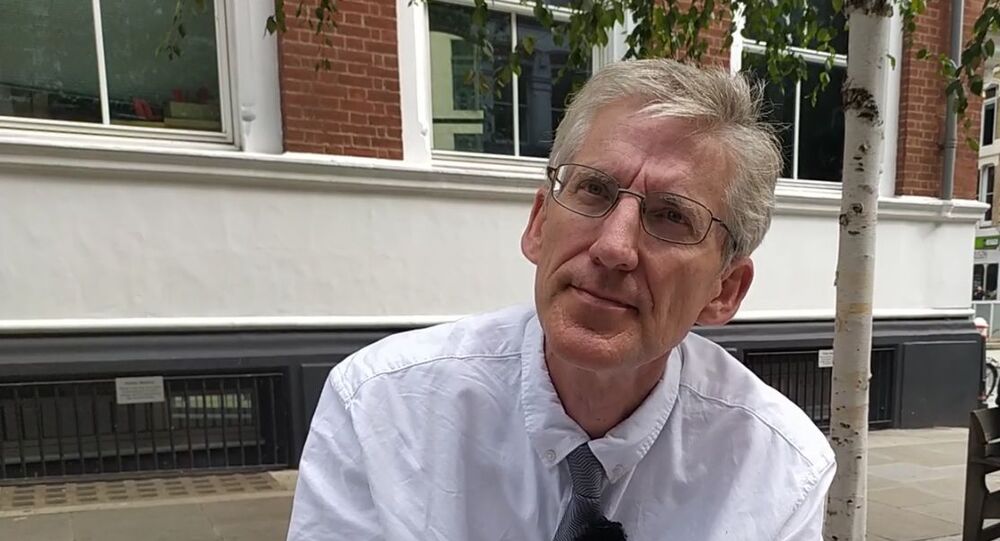 The founder of the US-based human rights organisation Reprieve told the court in Julian Assange's extradition hearing, on Tuesday, that based on his experience, the WikiLeaks founder can expect a "Pandora’s box" of everything that the government wants to throw at him regardless of what is said in the indictment.

Clive Stafford Smith, the British-American lawyer and founder of civil liberties group Reprieve, explained in an exclusive interview that notwithstanding the claim made today by James Lewis QC, acting for the US, that the charges against Mr Assange only relate to the publication of documents as they contained the names of sources, the reality of conspiracy trials in the US is something rather different.

Mr Stafford Smith testified on Tuesday morning and engaged in a hotly contested exchange with James Lewis QC the lead barrister acting on behalf of the US.

Sputnik: Explain who you are and the nature of your testimony at today's hearing.

Clive Stafford Smith: I am a human rights lawyer, and I was called as a witness today in Julian Assange’s case; and the main issue, I suppose, was how I and others like me have used the leaks from WikiLeaks to bring forward incredibly important human rights issues.

For example, the cables that WikiLeaks disclosed in Pakistan, which are part of the indictment against him, include cables showing that the then Prime Minister (Yousaf Raza) Gillani, had said to the American ambassador, Anne Patterson, that it’s not a big deal if you murder our citizens with drones, we’ll complain in the National Assembly and then we’ll ignore it. And this is a situation where I was very deeply involved in working with many fine Pakistanis to bring litigation about my government, the United States government, murdering Pakistani people – and remember Pakistan is one of our allies – in the name of the war on terror in Waziristan based on intelligence that was just fantastically bad, where they were murdering children left, right and centre. And thanks to this, and thanks a large part to the cables from WikiLeaks, we were able to bring litigation that took what was hundreds of people being murdered each year in Waziristan to - by 2019 - where there were none and where we began to reestablish peace in that area; and actually the Pakistani government has now incorporated Waziristan and Pakistan proper and I hope the world is going to be a much better place there.

A big part of what we were doing today was discussing this and discussing how, far from being a threat to American national security, a lot of that evidence really helped us as Americans to stop an incredibly bad programme that was harming America beyond measure and more importantly that was harming a bunch of innocent children.

​Sputnik: The US government was arguing that the documents that you referred to in your witness statement are not relevant to the indictment and that any trial would only focus on documents which allegedly revealed the identity of sources. But you pushed back against that, why?

Clive Stafford Smith: So the US government represents that none of the things that I mentioned were relevant to the indictment, and they are wrong, they are facially wrong, right there in the indictment it charges him with a whole bunch of those things.

But also I was taken aback actually. I would never lecture a British lawyer on how British law cases proceed because I'm not a British lawyer I'm American. And in terms of whoever had been talking to him how American conspiracy trials go forward, I’m afraid he just doesn’t get it; that’s not the way it happens, all of this is going to come into evidence. And the reason some of the things that I’ve been discussing are not highlighted by the US government in court here is because, frankly, they form the basis of cases that I and others have brought for criminal activity by the United States in terms of murder, torture, rendition and so forth. And obviously that’s not in a bearded chin they lead with. But actually, really, the US government’s representative was just wrong today. I’m sure that every witness in this case will back me up when I say that conspiracy cases open a Pandora’s box of everything the government wants to throw at them, basically.

Clive Stafford Smith explains the disconnect between what US representative was saying about the focus of the prosecution's case against #Assange & his experience of conspiracy cases in practice.

​​Sputnik: You have specifically said that they would use expert witnesses to bring in information that isn’t mentioned in the indictment. Is that the point you are making?

In most federal conspiracy trials in America, they begin with some sort of an expert, an FBI agent or someone, who just goes through an entire history. I remember when I was doing a federal conspiracy case in Florida, my client was a member of the Outlaws Motorcycle Club and he was charged with various things in the indictment, but the first two or three days there was some FBI agent just relating what he thought was the entire history of the Outlaws Motorcycle Club, including murders all across America that had nothing to do with the case. That’s just the way those cases go. And it is in a way what makes those cases peculiarly unfair in terms of [heresy and] all those sorts of intensely prejudicial material that’s thrown at you; they throw the whole kitchen sink at people in those trials which is a danger for justice.