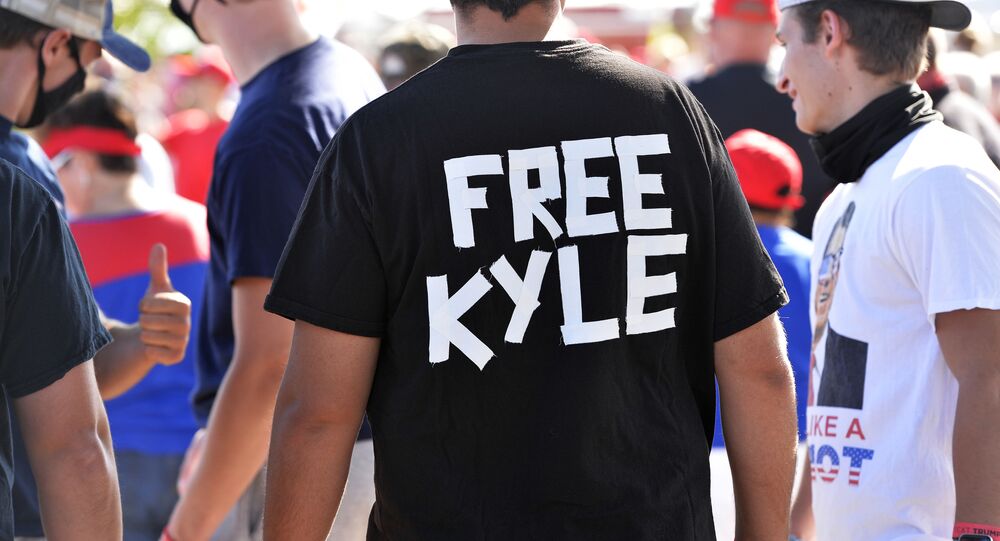 Kyle Rittenhouse, a 17-year-old Antioch resident, was accused of killing two protesters and seriously wounding a third in Kenosha, Wisconsin, on 25 August, amid riots over the shooting of Jacob Blake two days earlier. US investigative journalists have explained how the case polarised American society and became a tool to attack Trump and the GOP.

A fierce war of words erupted in social media in the aftermath of the shooting, with one group of netizens dubbing the teen a "white supremacist" and "mass murderer" and the other calling him a "hero".

"When Kyle Rittenhouse, a white teenager in a community where law enforcement has been defunded and overwhelmed stands up to exercise his second amendment rights and protect his community, his life and property he is vilified as a murderous racist. This happens despite the fact that the individuals he shot are that same race he is", observes Jason Goodman, an independent investigative journalist and the host of the podcast Crowdsource the Truth.

The journalist highlighted that one of the most fundamental aspects of life in the US, "which every person here should cherish and anyone elsewhere should covet", is the presumption of innocence.

"Every American, once accused of anything, must be presumed innocent until proven guilty and no viral video, tweet, Facebook post or other public accusation should impact that in any way", Goodman underscores.

Meanwhile, US politicians from both sides of the political spectrum have also weighed in, with Democratic Congresswoman Ayanna Pressley tweeting about the deadly incident in Kenosha: "A 17-year-old white supremacist domestic terrorist drove across state lines, armed with an AR 15. He shot and killed 2 people who had assembled to affirm the value, dignity, and worth of Black lives. Fix your damn headlines".

Democratic presidential nominee Joe Biden also alleged that Rittenhouse could be linked to some Illinois white supremacist militia, prompting some Twitter users to wonder what evidence the ex-vice president based this conclusion upon.

Joe Biden just went on CNN and alleged Kyle Rittenhouse was a member of an Illinois white supremacist militia. Does he have any evidence of that? What is their name?

​To add to the controversy, some netizens shared an unsealed court recording of a 4 August traffic violation indicating that the teen was listed as "Hispanic", not white.

For her part, Republican Senator Kelly Loeffler pinned the blame for the murder on rioters and governor who "still turned down help" from the federal government.

2 people died in WI last night because of rioters, & its governor still turned down help.

I intro'd a bill to restrict funding from cities & states where leaders don't take action against killers like this.

They must be held accountable. Take action now. https://t.co/nskJxP2qwz

​"Democrats in Wisconsin are now directly responsible for the two deaths in Kenosha", Charlie Kirk, a chair of the movement Students for Trump echoed the senator.

"The most important factor here is this notion of the court of public opinion", says Goodman. "Because social media has enabled interactive communication on a worldwide scale and connected each of us in ways that telephone, television, and radio did not, people now use it to try and convict people outside the parameters of due process. I believe those weighing in on Rittenhouse's guilt or innocence before a trial or even an investigation has been completed are the problem in America right now".

Social media giants and digital platforms have entered the battle as well: last Wednesday Facebook announced that it had removed Kyle Rittenhouse's pages: "We've designated this shooting as a mass murder and have removed the shooter's accounts from Facebook and Instagram", a company spokesperson said in a statement. Besides this, the social media giant is said to be censoring posts in support of Rittenhouse.

Facebook just removed a video I posted showing Kyle Rittenhouse offering help to a wounded protester in Kenosha and are threatening to delete my entire account. This was the video: pic.twitter.com/kXoUvQdTDS

​For its part, Twitter reportedly blocked the account of L. Lin Wood, Rittenhouse's lawyer, for several hours on 1 September when the attorney sought to raise money for his client's legal fees qualifying his posts as a violation of the company's guidelines.

(1) I was arrested today & confined in Twitter jail falsely accused of glorifying violence. I was exonerated this evening by a finding of “incorrectly actioned.” I am free tonight.

​The platform also locked the account of John Pierce, the teen's other lawyer, over tweets in support of his client.

​In addition, Discover, one of the largest US credit card issuers, blocked all donations for GiveSendGo, a Free Christian crowdfunding platform, which was raising money for Rittenhouse's legal defence.

The aforementioned factors indicate a "deliberate polarison" of public opinion with regard to the Rittenhouse case, Goodman opines. "The corporate owned media are like swirling vultures looking for a carcass or in this case even live prey to descend upon", he notes.

The unfolding polarisation is due to an information operation in play across the American media to oust Trump, presumes US investigative journalist George Eliason.

"The social media censorship has been part of the same 'whole country' information operation that's been in play since 2017 in the US", he says.

While it is still unknown whether Rittenhouse will be aquitted, even some left-leaning American observers do not rule out that the teen's legal team has a chance of winning the litigation. Eric Zorn, a daily blogger for the Chicago Tribune, who by his own account is "on the left", provided an analysis of the situation alleging that under the current weapons and self-defence laws "Rittenhouse is going to walk".

At the same time, The New York Times's Visual Investigations unit collected all available video footage of the night of the tragedy and tracked Kyle's movements. Their account of events coincides in some aspects with Rittenhouse defence team's description of what happened.

A teenager faces charges in shootings that left 2 people dead in Kenosha, WI. The @nytimes Visual Investigations team reviewed hours of livestreams to track 17-year-old Kyle Rittenhouse’s movements during and leading up to the shootings. [THREAD] https://t.co/FRCYlS5wgH

​Besides this, NYT investigators drew attention to the fact that someone shot in the air before Rittenhouse fired his gun for the first time and that his second shooting "was mixed in with the sound of at least 16 other gunshots that rang out during this time".

President Trump has also found himself in the crosshairs on Twitter for not condemning Rittenhouse and suggesting that the 17-year-old was defending himself: "You saw the same tape as I saw", the president said at a Monday press conference. "[Rittenhouse] was trying to get away from them, I guess, looks like. And he fell and then they very violently attacked him. And it was something that we're looking at right now, and it's under investigation, but I guess he was in very big trouble. He probably would have been killed. It's under investigation".

"President Trump did not condemn the actions of Kyle Rittenhouse, who is accused of killing two protesters in Kenosha. He called it, 'an interesting situation'", tweeted NBC Washington reporter Cory Smith.

Not only did President Trump refuse to condemn Kyle Rittenhouse shooting three people and killing two, he lent the power of the presidency to explaining why Rittenhouse could have been justified.

"They very violently attacked him," Trump said. "He probably would've been killed."

​"Anyone calling on the president or a presidential candidate to condemn anyone before they know the facts is contributing to the fundamental destruction of America and the protections its citizens enjoy under the Constitution", emphasises Goodman. "Anyone doing anything other than calling for an investigation by law enforcement and strict adherence to due process of law is simply un-American in the strictest sense of that word".

According to Eliason, the Rittenhouse case has already become a tool against the GOP and Trump. While the trial is likely to be put off until after the election, "everything will be painted to look like baby Charlie Manson" until enough facts are revealed, the journalist suggests. "Information operations rely on emotions not facts", he highlights.

"The Republicans need to keep this as a back burner issue but the Democrats will try to make Rittenhouse into the Trump monster", Eliason notes. "The legal process has to play out a little. Even though Rittenhouse will walk through this, and I'm saying this on available evidence, Republicans can still lose the 'social media trial'".

In contrast, Goodman believes that the unfolding campaign against Trump will only propel the incumbent "to a second term and likely a landslide victory in the 2020 Presidential race".