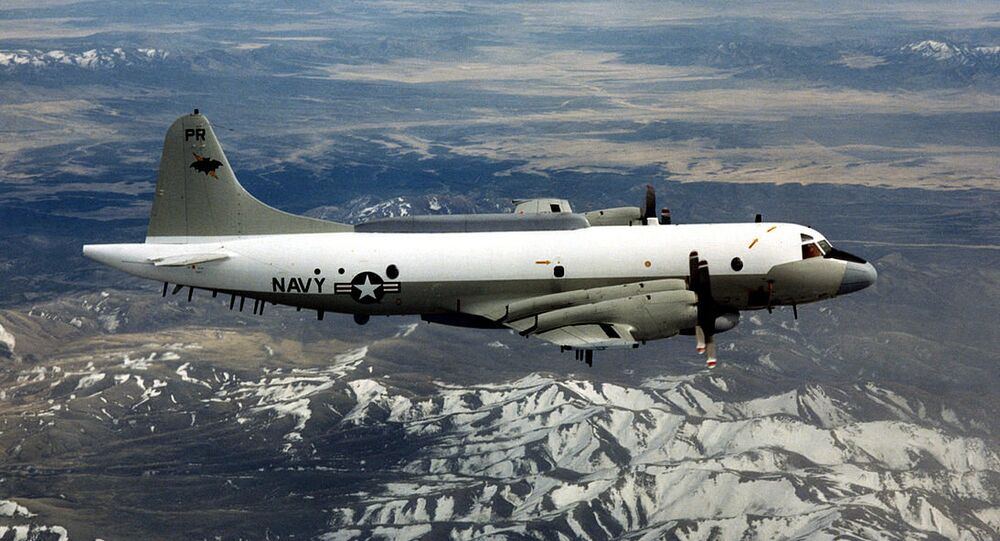 A US military aircraft appeared in the skies over Taiwan on Sunday, which was suspected of taking off from a Taiwan-based airfield and flew to Japan, although the Taiwan "air force" said it was against the facts.

The incident took place as the island's military claims that the Chinese mainland does not possess "enough capabilities" to launch an all-out attack on Taiwan.

Mainland experts warn that Washington is provoking Beijing to fire the first shot, and that current tensions could further escalate.

An EP-3E reconnaissance aircraft has been spotted in the northern "airspace" of Taiwan and flew to Japan over the East China Sea on Sunday and this unusual flight-path showed that the aircraft potentially took off from an airport on the island, according to information released by the website of the South China Sea Strategic Situation Probing Initiative (SCSPI), a Beijing based think tank.

According to the SCSPI, the aircraft was spotted in the south of the island conducting a reconnaissance mission in the South China Sea a day earlier, but with no landing signals showing it returned to the US' Kadena air force base in Okinawa, which means that the US aircraft may have not returned to Okinawa but landed on Taiwan island instead. The Chinese mainland warned this incident could be a serious provocation toward China and may escalate tensions.

However, Taiwan "air force command" responded on Monday that the information released by the SCSPI is "totally against the facts," Taiwan media cna.com reported.

The SCSPI uses an Automatic identification system and Automatic Dependent Surveillance-Broadcast (ADS-B) to track vessels and aircraft. Information in these two systems is open source commercial data, and accessible via multiple routes in China and abroad.

Hu Bo, director of the SCSPI, told the Global Times on Monday the ADS-B signal that the US military aircraft broadcast is incomplete, so the flight-path of the aircraft showed on the system is also incomplete, as the pilots of that EP-3E could choose to turn off broadcasting with no signal being released from it.

"Or, signal interference could also make the ADS-B of that aircraft show deviation, and it is also possible that the US military aircraft has fabricated the ADS-B signal, which means that EP-3E wasn't in fact there," Hu noted.

That's why Taiwan military officials have to deny the incident as they know how serious this could get if US military aircraft really landed on the island, said Chinese mainland experts.

On the other hand, if the US fabricated the signal to increase the chances for miscalculation, then it means the US doesn't want to avoid conflict with China at all, and it intends to create tensions and even provoke China into firing the first shot, potentially making it more terrifying and dangerous, Chinese experts warned.

On 18 August, Taiwan media also reported that an EP-3E from the US Air Force was suspected of landing at the Taipei Songshan Airport, but later, Taiwan military officers "privately" denied the speculation.

Song Zhongping, a Chinese mainland military expert, told the Global Times on Monday that using Taiwan-based airports as bases for intelligence-gathering aircraft makes US reconnaissance missions against the Chinese mainland much easier and more efficient as Taiwan is closer to the mainland than Okinawa, so "regardless if the incident is real or not, the US does have motivation to engage in risky military cooperation with the separatist authorities on the island."

Chinese mainland military analysts said if military cooperation between the US and the island was discovered and poses real threats to the mainland and challenges the sovereignty of China, the People's Liberation Army (PLA) will be forced to take effective action to eliminate that threat and may even realize reunification by force once and for all, although the mainland does not wish to escalate tensions.

Focusing on the US

Taiwan island's military is attempting to downplay the combat capabilities of the PLA to encourage the separatist authorities and forces on the island to keep up the risky provocations.

Song said the Taiwan military is boosting its morale facing overwhelming military advantage of the mainland, just like "whistling when walking alone in the darkness."

For the mainland, the best response to provocative moves made by the US military and the nonsense remarks made by the island's military is to be comprehensively prepared for military operations against Taiwan, especially preparing for a military conflict with the US, Song noted.

Jin Canrong, associate dean of Renmin University of China's School of International Studies, told the Global Times previously that the mainland should make its military deterrence more visible and build up enough deterrence to intimidate the US and the separatists of Taiwan, effectively eliminating their motivation of challenging China's bottom line.

This kind of thinking has also been reflected in the reality of the PLA's drills in the region amid tensions with the US. China launched a series of ballistic missiles into the South China Sea this week, according to US defense officials, CNN reported on Saturday, and some of these missiles are "aircraft carrier killers" like the DF-21D and DF-26, but the Chinese military and other relevant departments didn't confirm the launches.

The Maritime Safety Administration of Liaoning Province released a notice on Monday that from Tuesday to 22 September, there will be "military missions" in the waters of the Bohai Sea. Some military analysts said this area is normally used for testing submarine-launched ballistic missiles (SLBM), and this could be a test for a new generation SLBM and possibly mean that China wants to employ a strategic-level of deterrence toward the US, as the latter is becoming increasingly provocative.