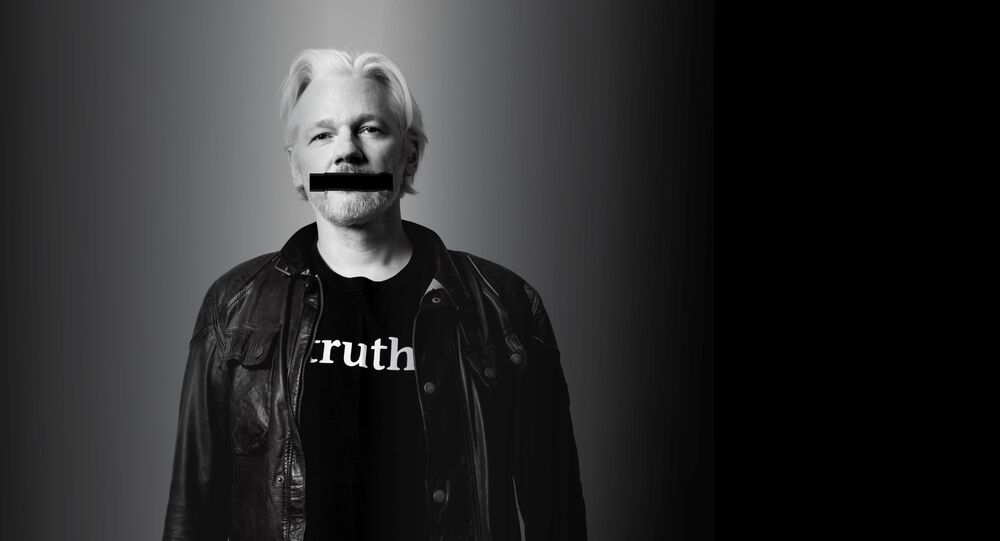 People in the West are witnessing "increasing authoritarianism" and need more than ever to know what is being done by their governments and in their name, the director of the new documentary The War on Journalism: The Case of Julian Assange tells Sputnik.

Juan Passarelli, an award-winning filmmaker and journalist, co-founded Guerrilla Pictures and Infosec Bytes. He has worked with WikiLeaks for ten years and collaborated with them on multiple projects. Mr. Passarelli explains what let him to direct his latest film: The War on Journalism: The Case of Julian Assange and his dire predictions for the future of journalism if the WikiLeaks publisher is successfully extradited to the United States.

Sputnik: How did you come to work with WikiLeaks?

Juan Passarelli: I came to the UK to do a master's degree in TV journalism. And in that course, I had to do an internship and I decided to do the internship with the most interesting person I met in the course, which was Gavin MacFadyen at the Centre for Investigative Journalism.  I have never seen anything like it in the world and I hope to see something like that in the future, because it was a hub where new journalistic ventures were made and people were connected to other people and great stuff just came out of it.

Gavin was a good friend of Julian Assange. Also interning with me were Sarah Harrison and Joseph Farrell. I finished my internship and a few months later I saw them on TV. I messaged Sarah and they asked me to film for them, like a fly-on-the-wall-type documentary, for the release of the Iraq 'War Dogs'. That was October 2010 and ever since I've been filming them - for the last 10 years.

There's a lot of material and eventually I'll make a film out of that. That's how I met WikiLeaks, when I met Julian. I knew about WikiLeaks, but I didn't know about him. It struck me that he was a very intelligent man and something that I confirmed throughout the years is that he is not only a brilliant person and incredibly intelligent, who has basically created a world pre-WikiLeaks and post WikiLeaks. He is also one of the most courageous and principled men that I know... actually the most courageous and principled man.

And this is partly why he's in the place he is, because of his principles, because he stuck to his values.

Sputnik: Describe the premise of your new film The War on Journalism: The Case of Julian Assange.

Juan Passarelli: The premise of the film is simple. There is a war on journalism. There is an increasingly dangerous authoritarianism growing in the West, where people are being surveilled to a much greater extent than than the Germany Stazi ever was able to achieve, because of our digital spying apparatuses that we have in our pockets called smartphones.

If you missed the World Premier of my film (and don't want to use a proprietary platform):

And they have a lot of secrets that they don't want the public to know because if the public knows about them, they will lose the power they have. So the premise of the film is if you want the power to know and the ability to know what the government is doing in your name, you must support this case. You must support Julian Assange. And you must encourage people who have positions in technical [fields] - network managers and all these people that work in tech, that have access to a wide array of documentation, in whatever organisation they work in, to look at it and see if there's anything that they think the public should know. And, if they do, go to WikiLeaks.org with a Tor browser and anonymously and safely release that information and it will be published and made available to the public in the most responsible manner and in the way that gets the maximum attention possible.

Sputnik: Why did you make this film?

Juan Passarelli: Well, I've abstained [until now] from making a WikiLeaks film because I have not felt that this story had finished yet. I needed a clear ending and I have seen, throughout the years, a systematised campaign to attack Julian and WikiLeaks, with five different countries involved and their major, you know, propaganda apparatus, legal apparatus, trying to destroy him and WikiLeaks. The countries are the United States, Ecuador, Australia, Sweden, and the UK, of course.

I thought that it was time to do something because I've been witness to all of these events throughout the years. I've been witness to the publications and I've suffered with the people that had been investigating these materials when they discovered, you know, details like a girl being tortured with a drill or a group of coalition forces invading the house of a farmer, with his family and extended family there, they tied them up, they executed them, including several children, and then they ordered an air strike to eliminate the evidence of the absolute horror of murder. Obviously, there is [also] what we have seen so many times, and it's still grueling to my stomach, the collateral murder video that shows the callousness and detachment of the pilots towards human lives. And they seem like they're playing a game, a video game, and they're having fun while killing these people and saying stuff like, 'Yeah, look at these dead bastards. Nice'.

So I saw that and I saw how important these revelations were. I just wanted to make sure that I could put this in very simple terms. This is what he published. This is exactly why he's being charged and why the US wants to get him into the US and put him in a black dungeon where he could never be seen again.

Sputnik: Who is it that you’re trying to reach with this documentary?

Juan Passarelli: So this is a difficult question for me, because I was trying to reach people whose lives do not revolve around WikiLeaks. And that actually for me is kind of difficult because I've been so attached to this project for such a long time. Every time I talk to people that have normal jobs and lives, they have questions that just need answering, because there have been such incredible, systematic, attacks on him and on the organisation, and it just needs clarification.

Also it's been a case that's been going on for 10 years. So I think people might not even remember what 10 years looked like. So I was trying to remind people that this is not a difficult case to understand; that all the layers of propaganda and smears that have been laid upon it can be stripped bare really quickly to understand that what is at stake here is not only freedom of speech, but also their right to know what the government is doing in their name, with their taxes and with the mandate that they give them with the vote. If they are stripped of that right, there is no democracy. There is no way that they can make an informed decision as to who should be the leader of the country.

So that's the audience I'm trying to reach. I mean, as far and as wide an audience as possible, and people who might care about their right to know.

Sputnik: What do you say to those who argue that Julian Assange should face trial in the United States and that if he is innocent, he has nothing to fear?

Juan Passarelli: Well, the Espionage Act has never been used on a journalist, ever. So this is already a very worrying thing. And the precedent that some people say will be set if he is extradited in my mind has already been set. Because if journalists receive information that is of the calibre of the information that WikiLeaks published in 2010, I would think that they might actually self-censor and not publish everything, or have to protect themselves and limit the amount of information that the public receives.

In some way we saw this happening in the Panama papers. We're seeing all these attacks on journalists in Australia and Brazil with Glenn Greenwald, in the United States where journalists are getting beaten up and putting in prison. I think that in the Courts of Eastern Virginia, where he would be tried, where 80% of the population is made up of people that work for the CIA, the NSA, the Defence Department of Defense or Homeland Security, or their family members or security contractors, he doesn't stand a chance, just in [terms of] the jury.

Also, the CIA has been spying on his privileged legal conversations with his lawyers over the United States case. I mean, this is outrageous, the case should be thrown out just on those grounds.

What is happening here is that the US is outreaching its jurisdiction and literally taking over the sovereignty of the United Kingdom and applying its laws in the sovereign nation of the UK, in the Queen's land, shall we say, and using their laws to try to extradite him to the country where he would face a proceeding in secret - where his lawyers [may] not be able to talk about the case - and where... he's facing 175 years in prison. This is absolutely insane.