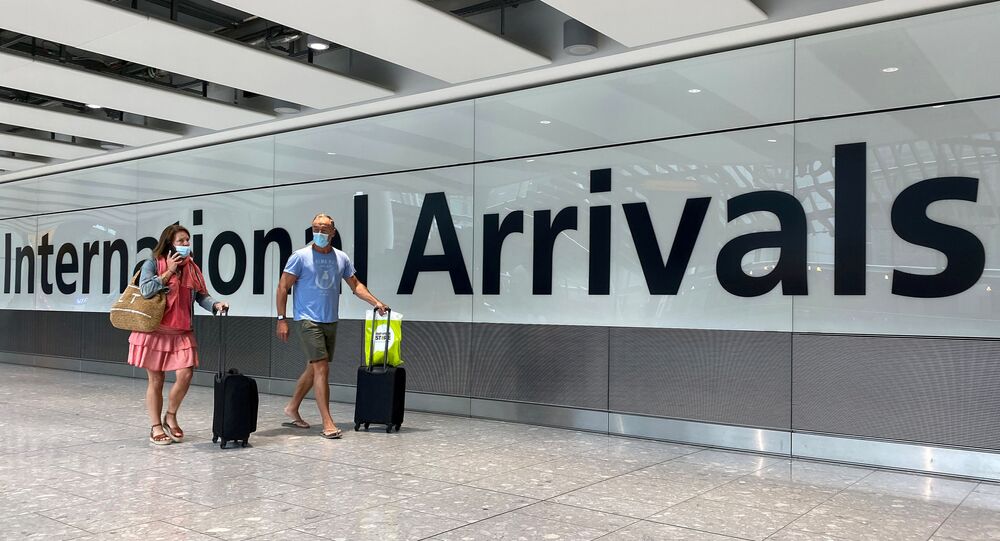 With more on this story, Sputnik spoke the political commentator John Whitby, in this interview.

Sputnik: Is the UK right to impose blanket bans on travel between countries?

John Whitby: I think it's starting to follow a bit of a pattern of overreactions, actually, and I think what we should be doing is looking more at testing everyone who comes in and following that route and if they test positive than they are put into quarantine.

I think the way we're going is damaging but I think we also need to look at a few other things regarding the virus, which are probably being ignored at the moment.

Sputnik: Do you think the government's necessarily being clear enough off when it comes to these decisions and the messaging?

I think that the government's message on holidays, let's be honest, they're damned if they do, they're damned if they don't. If they say people shouldn't go on holidays and shouldn't go abroad, then that's not a good message to send; if they say you can go, and let's be fair, they have actually said these are the countries that we have the airbridge with at the moment and they're clear, however, that might change.

My problem isn't so much with what the government is doing. It's probably with the science that they're basing it on and that's where I'm starting to have some real issues.

John Whitby: Most countries have done very similar things to the UK in one way or another with an exception being Sweden. Now you would expect Sweden to have a much higher infection rate and death rate than anywhere else in Europe. That hasn't happened.

We keep being bombarded with messages, especially from the World Health Organisation saying how deadly and contagious this disease is but when you start looking at the figures, were in the UK now, our death rate is below that for seasonal flu and pneumonia.

But in fact, if you've got pneumonia and you've got COVID, it will be recorded as COVID. Everywhere you look COVID is being put on the death certificates, almost no matter what you die from if you've tested positive for COVID in the last 28 days.

So, it looks like the COVID death rate is being pushed up. You've got other people, I read a very interesting article by a Swiss professor who said that what he's seeing is that many people actually have a partial immunity already because COVID is part of a family of viruses.

© AP Photo / Matt Dunham
UK Study Shows Only Six Children Have Died Of Covid-19 – And All Had Serious Health Problems Already
So, if you look at what's happened in Sweden, you look at the fall in the death rates and the infection rates and a lot of us expected a huge spike after all the protests that we had a few months or so. That didn't happen. Now, it should have done because people weren't following the guidance.

So I think there's a lot of questions that need to be asked of the science that's leading this at the present time. It all seems to be pushing us towards vaccination and that concerns me because there seems to be a lot more out there than we are really getting access to.