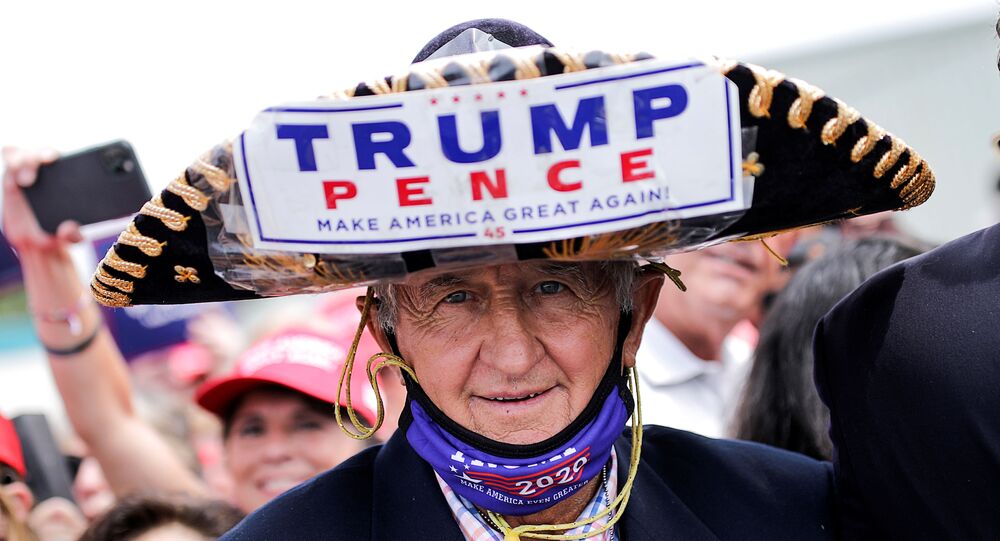 Both parties have formally announced their candidates for the upcoming US presidential election. Joe Biden will represent the Democrats in the race for the Oval Office, and Donald Trump will be the Republican nominee. The two will fight for their electorate as the country deals with nationwide anti-racism protests and the COVID-19 pandemic.

As the Republican National Convention continues, Sputnik spoke to Pastor Mark Burns, an evangelical preacher and former Republican candidate for South Carolina's 4th congressional district seat, who shared his opinion on the level of support for Trump among religious communities, people of color and the undecided, touching upon other topics.

Mark Burns: Support for President Trump among Christians and people of faith is extremely high.​ You got to remember that evangelical Christian’s community is the largest voters block in America. So this is the number one group. If you’re able to have their support it is very difficult for a Democrat to win on a national level. People of faith and Christians are the strongest groups here in America.

Sputnik: Democratic Georgia State Rep. Vernon Jones, who is African American, is planning to vote for Trump. He said that “The Democratic Party does not want Black people to leave their mental plantation”. Will this rhetoric resonate with black Democratic voters?

Mark Burns: I’ve been on the ground level since President Trump announced his candidacy in 2015. I was here watching the campaign grow from just a few people to this massive machine. I was just with the president yesterday and I can tell you that the rhetoric is causing a lot of black people to second guess their support to the Democratic Party. Now will the majority of black people vote Democrat? Yes, absolutely – that’s going to be the case. So it will take a longer time than rhetoric before the campaign or before the election to begin a change in mentality. Maybe they should take somebody like me and I should run for president (laughs).​

But I‘ve seen with my own eyes that black Americans who start as Democrats are now questioning what exactly the Democratic party does​ for people of color and low income families and at risk communities in this nation. People who voted Democratic their whole life, now, because President Trump is doing more for African-Americans not with just good words or identity politics or playing to your color base, but he is actually doing things like giving money to HBCU’s (historically black colleges and universities), helping people who are getting out of prison or placed in prison by a failed 1994 Democrat policy of putting millions of black people in jail. The president is getting them out of jail. 98% of those that had been released from prison are black Americans. Not only is that he is getting them out of jail, but he is assuring that they have a way to go to work.

For the first time ever the president is working with the federal agencies to allow those who have been released from prison to be able to get a job in the federal system. That is getting people an opportunity to not get back in jail not to do more criminal activities after they are released. The unemployment level among African-Americans is at the historically low level, especially before coronavirus. The president is actually doing things. He is not going to play you to feel good like the Democrats do. They talk about slavery; they talk about Jim Crow, what the Democrats have done in the past, etc. Let’s just look at the cities that are led by the Democrats. When you look at them you’ll see that these cities are in ruins in America.

Sputnik: How much of the African American electorate do you think Republicans can attract?

Mark Burns: President Trump attracted 8% which is pretty high. It was higher than Mitt Romney’s 6%. The supposedly “racist” Donald Trump gets 8%, more than Mitt Romney. We’re looking between 13-15% of the African American votes here in America. It has grown from the 2016 Presidential Election.

Sputnik: Many topics were raised at the RNC ranging from health care to economics and race. In your opinion, will the Republicans be able to attract undecided voters?

Mark Burns: Without a question. I think one of the greatest things of the Democratic party is that they allowed the violence and riots to take place. Not the peaceful protests. Everybody knows that George Floyd should not have died. Donald Trump Jr. said during his speech that if you talk to any police officer in this country, they will all agree that George Floyd should not have died. We need to eliminate racism in America.

But what the liberal socialists have done – they have taken George Floyd’s death and it has been highjacked by socialist anarchists who want to destroy western culture. So the riots, looting and even a murder that has taken place – that is not America.​ So for those who are in the middle of the road, those who are undecided – they are certainly painting a picture of what a society, the socialist left Democrat party is leaning towards. They are celebrating these violent acts, they are not condemning them. Even those who are in the Black Lives Matter movement should be condemning those who have infiltrated themselves and have highjacked the peaceful protesters.

And you can see what is taking place in Milwaukee right now with this young man who is now paralyzed. He was walking away to his car and the cops shot him six to eight times and now this young man is paralyzed. That is a senseless death at the hands of the police, two people of color in this country and there is a right way to do it and the socialist Democratic Party is doing it the wrong way by burning, looting, killing.

Sputnik: The mainstream media is stating that the RNC is trying to "rewrite pandemic history,” saying that Trump supporters are trying to whitewash his actions in the fight against COVID-19. How would you assess such rhetoric and media attacks?

​According to CDC and the doctors who are leading the calls against this horrible virus that is in America, they stated themselves that President Trump acted swiftly once this information began to bump America’s shores. But yet the mainstream media are trying to downplay Trump’s involvement and leadership ability and trying to portray this as this is his fault. This is not his fault. This is a 'China virus' and it happened when China refused to allow America, the WHO and other countries that tried to assist them, they tried to keep it quiet. It could have been prevented. It is China’s fault. And Joe Biden and the Democratic party are also downplaying the seriousness of this virus.

Videos: Night One of RNC Enriched Internet With #Guilfoylechallenge