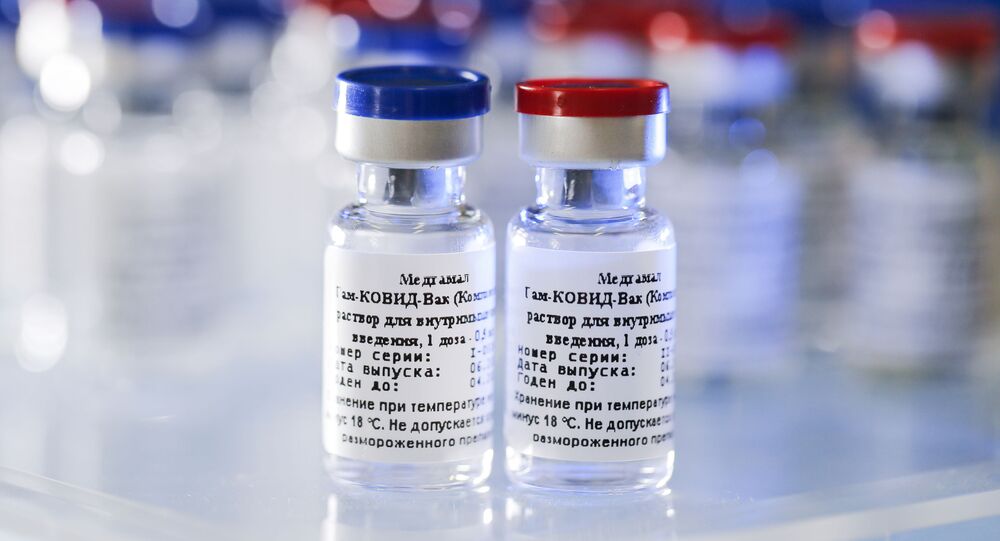 On 11 August, Russia registered the world's first vaccine, named Sputnik V, which was developed by the Gamaleya Research Institute of Epidemiology and Microbiology, and funded by the Russian Direct Investment Fund (RDIF), which has donated over $54 million for coronavirus research.

According to the head of the Russian Direct Investment Fund, Kirill Dmitriev, the fund has received requests from more than 20 countries for the purchase of a billion doses of Sputnik V. Russia is expected to manufacture Sputnik V in five countries, which will boost the production up to 500 million doses per year. By the end of this year, Russia plans to produce about one and a half to two million doses of the COVID-19 vaccine, Industry and Trade Minister Denis Manturov told the Zvezda television channel on Sunday.

"The world race for the creation of an anti-COVID vaccine is over and we know that the champion of the microbiological innovation is Russian Gam-COVID-Vak, called Sputnik V in reference to 4 October 1957, when the Soviet Union launched the Earth's first artificial satellite into space, inaugurating the technological revolution in the cosmos," says Dr. Heinz Dieterich, director of the Centre for Transition Sciences (CTS) at the Autonomous Metropolitan University in Mexico City, and coordinator at the World Advanced Research Project (WARP).

However, the return of the "Sputnik moment" has unleashed "a tsunami of propaganda aggression against the Russian vaccine", the professor highlights.

"The Russian dash for a vaccine has raised widespread concern that it is circumventing vital steps — and potentially endangering people — in order to score global propaganda points," claimed The New York Times.

"Hooray if Russia has actually made progress on COVID, but don’t bet on it," echoed The Wall Street Journal, expressing concern over the "safety" and "efficacy" of the Russian vaccine.

In the race to develop a Covid-19 vaccine, Russia offers to help US but the US says no thanks - "There's no way in hell the US tries this on monkeys, let alone people," one US government public health official said. Mine, w/@mchancecnn⁩ & zahra_ullah https://t.co/Yu3VW8lxbQ

​"We have no idea if the Russian COVID vaccine is safe or effective", The Guardian insisted.

After Russia said it had approved a coronavirus vaccine for use, Dr. Anthony Fauci, the nation's top infectious disease expert, said he seriously doubts Russia has proven its vaccine is safe and effective. https://t.co/W4CKCrpn3q pic.twitter.com/38ur95xtYZ

​Dr Anthony Fauci, director of the National Institute for Allergy and Infectious Diseases, also expressed doubts that the Russian product will "work" without "hurting a lot of people": "Having a vaccine and proving that a vaccine is safe and effective are two different things," he noted in an interview with ABC News on 12 August.

One might ask whether these sceptical approaches to the "COVID-19 Czar" is justified, however, there is nothing mysterious about the mind-boggling speed of Sputnik V's development, highlights Dr. Dieterich, citing Gamaleya Centre scientists.

In fact, the vaccine's technological platform, based on human adenoviruses, has been researched by the institute for the past four decades and tested on thousands of people. In particular, the platform is used in the institute's vaccines against the Ebola fever and the Middle East Respiratory Syndrome (MERS).

The institute's expertise and decades of experience, coupled with best practices helped Russian scientists roll out the new anti-COVID vaccine in record-breaking time, according to Gamaleya Institute director Alexander Gintsburg.

Adenoviruses are viruses which are found in adenoids and cause the common cold. Once stripped of the gene responsible for replication, they are used as "vehicles", or "vectors", to transport genetic material from a different virus – in this case, SARS-CoV-2 - into a human cell. A number of the world's anti-coronavirus vaccine candidates are also based on this widely-known method.

What makes Sputnik V unique is that it is based on a breakthrough concept of using two different types of adenovirus vectors (rAd26 and rAd5) for the first and second vaccination, which guarantees long-term effects, lasting two years following the injection.

Having undergone experiments on different types of animals, including primates, the drug entered Phase 1 and 2 of clinical trials which were completed on 1 August 2020, demonstrating good safety profile and high immunogenicity.

It is expected that post-registration clinical trials of Sputnik V will begin this week with 40,000 people taking part in them. In Russia, mass vaccination against COVID-19 will start in approximately a month's time, after enough Sputnik V samples are produced, Gintsburg revealed to Sputnik on 16 August. A number of countries, such as the UAE, Saudi Arabia, and Philippines are due to join the clinical trials of the Russian-made vaccine locally.

Russia's decision to register its vaccine before the completion of the Phase 3 trials is neither extraordinary nor premature, Dr. Dieterich highlights.

Nobody appears to be confused by the fact that in mid-June, British-Swedish firm AstraZeneca reached an agreement with the European governments to provide them with 400 million doses of its potential COVID-19 vaccine, AZD1222, before it reported "positive data" from the Phase 1 and 2 clinical trials in late July.

While in ordinary times a vaccine candidate may be tested for years, during a health emergency, the conventional protocols are usually modified, the professor observes.

The COVID pandemic has to date claimed over 813,000 lives and dealt a heavy blow to the world's economy, dragging most countries into a deep recession.

"Almost none of the entities currently working against COVID-19 are following the conventional protocol rigorously for the simple reason that the global emergency does not recommend the conventional bureaucratic action of the status quo ante (normal situations), Dr. Dieterich underscores.

To illustrate his point, the professor refers to fast track methodology embraced the British transnational corporation GlaxoSmithKline and the French company Sanofi: according to him, by the end of July their vaccine candidate was still in the pre-clinical phase, but to accelerate its arrival in the market Sanofi plans to compress the early and intermediate phases of clinical trials in a study that begins in September, followed by phase three towards the end of 2020.

"Other methods to reduce the time of clinical phases include the urgent vaccination of the groups most exposed to the pandemic, such as medical personnel and school teachers, as will be done in Russia and is also planned at the University of Oxford," the academic emphasises.

While Western "experts" and media pundits vocally express doubts about the safety and efficacy of the Russian anti-coronavirus drug, it appears that the curative properties of potential vaccines developed by Big Pharma are taken as a given, the professor points out.

However, some scientists have cast doubts over long-term efficacy of AstraZeneca's potential vector vaccine, which is based on chimpanzee adenoviruses: long-term studies of the possible effects of chimpanzee adenovirus-based drugs on human fertility and risk of cancer have not been conducted yet. In contrast, human adenoviruses have proven safe in this respect, being administered by thousands of people for decades.

"Man has never encountered a chimpanzee adenovirus in his history and the long-term effects of the influence of a certain framework of chimpanzee adenovirus on humans have yet to be determined," Denis Logunov, deputy research director at the Gamaleya Centre, opined in an interview with Russia's Channel One broadcaster.

Besides this, Russian scientists presume that their two-vector approach may potentially be more effective than mRNA the one-vector technologies of competing vaccine-makers.

One might bear in mind that the US vaccine-makers are shielded from liabilities emanating from possible harmful side-effects in the event of a declared public health emergency under the 2005 Public Readiness and Emergency Preparedness Act (PREPA), remarks Dr. Dieterich.

Likewise, in early August, AstraZeneca was granted protection from future product liability claims related to its COVID-19 vaccine candidate. The firm, which is developing its anti-coronavirus drug in partnership with Oxford University, is planning to produce 2 billion doses for Europe and the US.

© Sputnik / Vladimir Pesnya
A researcher works inside a laboratory of the Gamaleya Scientific Research Institute of Epidemiology and Microbiology where the world's first coronavirus vaccine registered in Russia was developed, in Moscow, Russia

Russia's Sputnik V vaccine has emerged as a worthy competitor in the market which has been controlled by Big Pharma for several decades, emphasises Dr Dieterich.

But the story does not end here, as some other Russian labs are continuing their work on their own new COVID-19 vaccine candidates. The Russian Research Centre Vektor intends to complete clinical trials of its anti-coronavirus product in September.

"To the greater disgrace of Western politicians, investors and shareholders of the pharmaceutical octopus Big Pharma, on 16 August socialist superpower of the People's Republic of China granted its first COVID-19 patent on the vaccine developed jointly between the great scientist Chen Wei of the Academy of Military Medical Sciences and the biotech company CanSino Biologics," the professor points out.

On 4 October 1957, the "Sputnik-1 moment" of the USSR, the country, which had been hit by two devastating world wars changed history forever, the academic notes, foreseeing that Sputnik V may pave the way for further technological breakthroughs.

"With Sputnik I, Moscow became the centre of humanity's space technological revolution," he says. "With the production of the first vaccine against COVID-19, registered as Sputnik V, Russia is confirming its status as a scientific superpower."

Sputnik V: Why Russian Vaccine Was Developed So Quickly