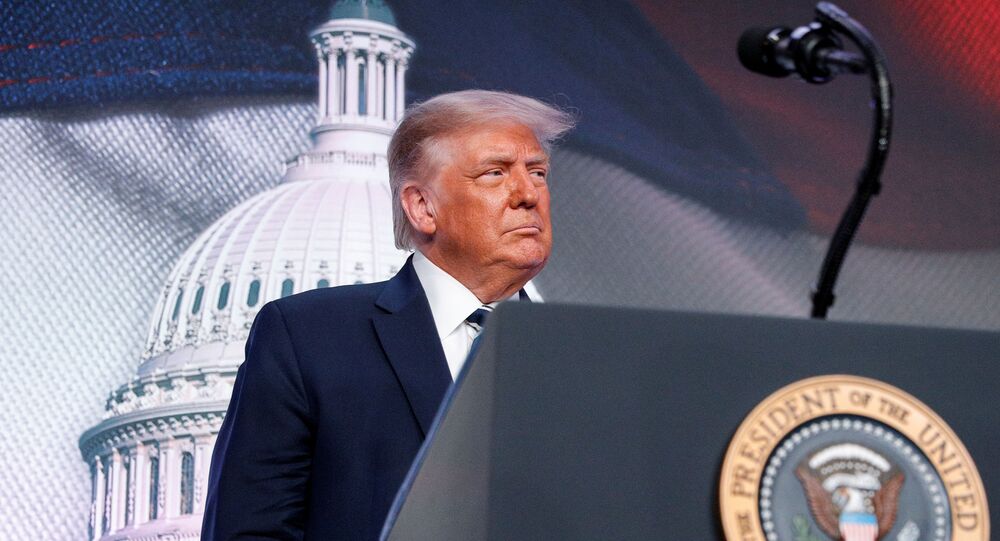 After the virtual Democratic National Convention (DNC) came to an end with Joe Biden formally accepting the party's nomination for president, the Republican event is kicking off on 24 August. American observers have discussed how the RNC show will differ from the one streamed by its competitors.

While the 2020 DNC was largely focused on US failures under Trump's presidency, the Republican National Convention (RNC) is spearheading quite an opposite agenda. Eloquently titled "Honouring the Great American Story", it is expected to turn the spotlight on Washington's achievements under the incumbent administration. The dissimilarities don't end there, as the 2020 RNC will be only partly digital: about 336 delegates will meet in Charlotte, North Carolina. President Trump is likely to feature on each night of the convention before formally accepting the nomination from the White House on Thursday.

.@realDonaldTrump just confirmed he will give his Convention acceptance speech next Thursday from the @WhiteHouse

"The focus of the RNC will be the long list of accomplishments during President Trump's first term, contrasted with the lack of Biden's accomplishments throughout his 47-year career in government," opines Mike Hoxard, an American political commentator. "President Trump will then lay out his vision for America's future during his second term".

President Trump's message has been consistent throughout his presidency, admits Eric S. Heberlig, professor of political science at the University of North Carolina, who expects that Trump will re-emphasise the key elements of his strategy, i.e. his accomplishments including the economy, tax cuts, less regulation, and building the wall, as well as his draining-the-swamp effort and his fight against the establishment and for a common cause.

Meanwhile, the US media draw attention to the fact that the incumbent is heading into this week's convention trailing behind his Democratic rival, Joe Biden, by 9-10 percentage points. According to a new CBS News/YouGov polling, Biden is leading by a 52% to 42% margin among likely voters. For its part, Morning Consult admitted that although the Democratic presidential nominee is still leading, he has not had any immediate convention bounce, while The Wall Street journal dropped a hint that President Trump "has some strength" in the polls.

RNC 2020 Seeking to Fire Up Trump's Base

"Donald Trump is going to work his base and attempt to get them fired up," foresees Dr. Timothy Kneeland, chair of history and political science at Nazareth College in Rochester. "That is why, unlike the Democrats, there are Republican delegates in Charlotte."

American Elections tend to be retrospective campaigns: a sort of a referendum on the last four years of whatever political party occupied the White House, according to the academic.

One might expect that the 2020 RNC will bring in speakers who will remark on the changes wrought by Trump pre-pandemic, especially when it comes to the economy and unemployment rates, he suggests. They are also likely to devote some time to bashing their rivals and "point to what they see as the anti-Americanism of the Democratic Party", Kneeland says.

"It will feature Donald Trump every evening in the 10 pm hour, many of his children, and a host of speakers who will use their time to emphasise how Donald Trump successfully met the challenges of the last four years and reversed the decline initiated by 8 years of Barack Obama," the academic elaborates. "They will paint a picture of Joe Biden as hopelessly captured by the left wing of the Democratic Party.  Thus, each party will be making this election about Donald Trump."

He does not rule out that the Republicans will resort to scaremongering: "Trump will use fear of what will happen if Joe Biden and Kamala Harris win the election in November," Kneeland presumes. Much in the same vein, Democratic Senator Bernie Sanders warned Americans that the future of the US democracy, economy and the planet is "at stake", urging them to cast their ballots for Biden.

While some Republican observers castigated the DNC show for being "boring and slow", the RNC has hired producers from Trump's television show "The Apprentice" to try to keep the televised event entertaining, the academic remarks, adding that thus "there will be more of an emphasis on live rather than previously recorded material".

Though the RNC offers a long list of participants, it includes no prior Republican presidents or office-seekers such as Mitt Romney, Kneeland who still expect to see Mitch McConnell, Sen. Tim Scott, Sen. Joni Ernst, and a few others joining the event. "As of yet there no entertainers have been identified but one would think someone like a Kid Rock or other Trump supports might make an appearance," he adds. In short, the GOP convention is likely to bring some surprises to viewers in order to reinvigorate Trump's base.