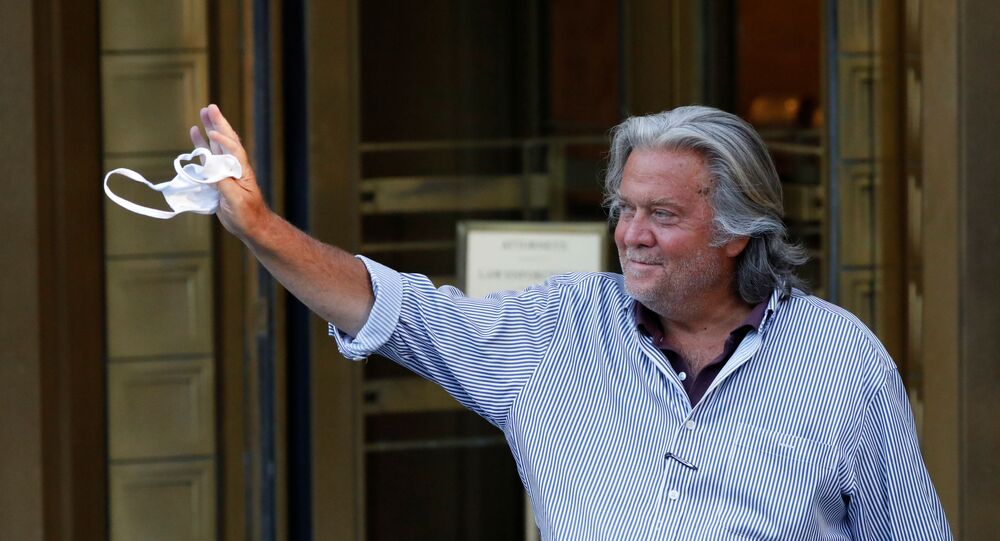 The arrest of the former Trump strategist Steve Bannon and three of his colleagues from the project that mimics President Trump's pledge of building a border wall came out of the blue less than three months ahead of the November vote that will determine whether POTUS will be re-elected for a second term.

The sudden emergence of accusations against former POTUS aide and reportedly one of the main architects of the Mexico border-wall project, Steve Bannon, was not an accident, but a calculated political move, several experts interviewed by Sputnik opined. He and three other individuals were accused of wire fraud and improper spending of funds raised as a part of the "We Build the Wall" project.

It is "clearly a political hit job", which was timed to harm President Donald Trump and hurt his chances of re-election, Pamela Geller, a political activist, commentator and editor-in-chief of the Geller Report believes. She highlights the fact that the four men were a part of the group that was working on a project that mimicked Trump's border wall and hence discrediting the "We Build the Wall" initiative's members could potentially harm the president as well.

"The fact that Trump has made it clear that Bannon's Wall project is not in play in the actual building of the Wall will be under-reported and ignored outright by an establishment media that is bent on defaming and destroying Trump. […] The arrest of Bannon gives them a useful tool that they can and will use to hit Trump on [the issue of preventing illegal migration]", Geller says.

The attack against Bannon is just another "desperate" attempt by Democrats to find a way to attack POTUS ahead the election, William Stroock, author and political analyst, thinks. But at the same time, their efforts are unlikely to bear fruit, as public attention is currently pre-occupied with other matters, such as the coronavirus pandemic, civil unrest and a stagnating economy, the analyst adds. In addition, US citizens have simply developed so-called "scandal fatigue" and barely react to news like the one about Bannon's arrest, Stroock sums up.

Could There Be More to It?

The assumption that the criminal case against Bannon will be used by Democrats to get back at Trump has crossed the mind of another political analyst, former US Army officer Scott Bennett, who, however, admits that there could be other explanations to the potentially high-profile prosecution. Bennett notes that should Democrats seek to undermine the idea of the Mexico wall through the case against the "We Build the Wall" initiative, they would achieve almost nothing, as many Americans support Trump's plans.

The analyst calls prosecutions like the one opened against Bannon a "standard operating procedure" for the Department of Justice in "politically-motivated cases" and believes that Bannon and his associates will be subjected to a process of "political extortion". They will be pressured to accuse the rest of the group of committing crimes they have never taken part in, in exchange for freedom or other preferences – something that could have been already used against other Trump's aides, Bennett explains.

"It was in fact done against other members of the Trump support team including Rodger Stone, George Papadopoulos, Carter Page, Paul Manafort and General Michael Flynn", the analyst says, adding that he doesn't believe any of the four arrested men will fall for the DoJ's alleged offer.

There are of course two other possibilities, Bennett admits. One of them is that Bannon and his colleagues indeed deliberately engaged in fraud by playing on people's fears. But he, personally, thinks there was no foul play and suggests that the transactions the DoJ believes to be illegal personal expenses were actually typical costs of running an operation – such as paying for the phones or electricity.

The accusations presented on 20 August hardly even make a case against Bannon, whom the DoJ suspects of wiring $1 million of the total 25 to his non-profit and allegedly spending them improperly, Pamela Geller points out. Bannon is "innocent until proven guilty", she concludes, essentially citing the last portion of the DoJ official release in regards to the criminal case.