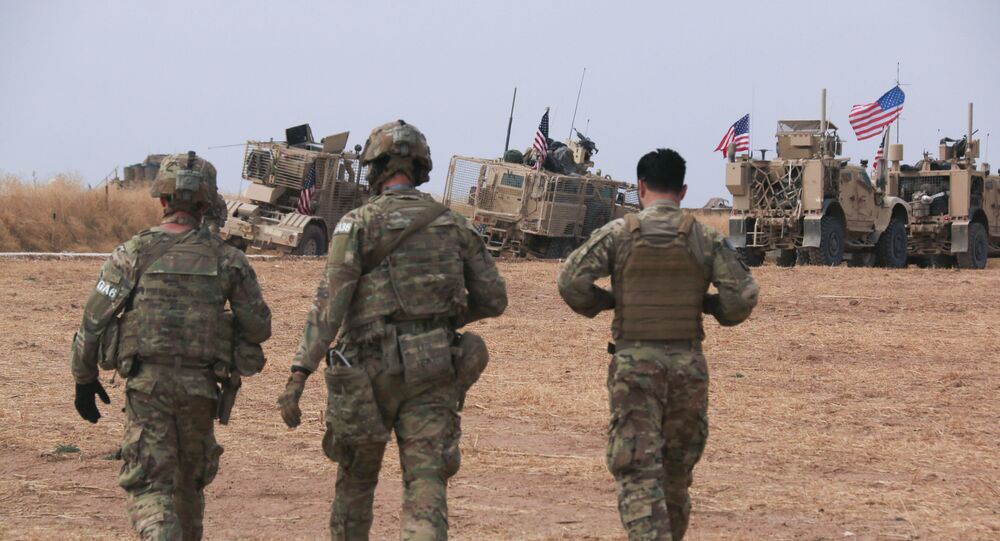 US bases and personnel have been increasingly attacked by unidentified actors in Syria over the past several months. Political analyst Christopher Assad and US military veteran Mark Sleboda have shed light on the trouble brewing for US occupation forces in the northeastern Syrian provinces of Al-Hasakah and Deir ez-Zor.

In early August, the US base in the town of Ash Shaddadi, in Al-Hasakah province, was shelled by unknown militants, according to Al-Watan newspaper. At the end of May, a military convoy of US troops and the Kurdish-dominated Syrian Democratic Forces (SDF) were reportedly attacked by unidentified fighters in Deir ez-Zor province. A month earlier, on 20 April, a US military vehicle was destroyed in Al-Hasakah governorate.

"The attacks against the illegal US presence in Syria were bound to happen after the US reversed its withdrawal plans", says Christopher Assad, a Canada-based political analyst of Syrian origin.

Despite Trump's repeated pledges to pull out of the region, it appears that the US military has a different agenda than that of the administration and is marching to a different tune, the political analyst deems. "That much has become clear to the Syrians, Iraqis and Iranians, which have determined three years ago that the US may not withdraw as long as it controls the flow of stolen Syrian oil without military pressure", he notes.

The ambush strategy appears to be developed by Syrians, Iraqis and Iranians to augment the pressure on the US presence in Iraq and Syria, according to Assad, who adds that the general responsible for the development of the plan was most likely none other than Qasem Soleimani along with some of the Iraqi and Syrian tribal chiefs.

Soleimani, an Iranian major general in the Islamic Revolutionary Guard Corps (IRGC) and commander of the Quds Force, was killed in a targeted US drone strike on 3 January 2020.

"The effective strategy will remain in effect until the inevitable withdrawal of US troops from Syria and Iraq, precisely as Soleimani has envisaged," the political analyst believes.

According to him, Trump is by no means interested in increased casualties among the US military personnel stationed in Syria. The unfolding events may facilitate the US pullout from the country, which would subsequently isolate the SDF and "make them an easy target for the Turkish occupation forces" on the ground, the analyst envisages.

"We will have a lot to say about that inevitable mini-war when we get there", he remarks.

The timing of these increased attacks, apparently launched by local Arab tribes in both Al-Hasakah and Deir ez-Zor provinces against the illegal US military occupation, follows two particular but related events, according to Mark Sleboda, a US military veteran and international affairs and security analyst.

"First is the announcement that an, until now, unknown US oil company, Delta Crescent Energy LLC, has signed a deal with the US-backed Kurdish-led Autonomous Administration of Northeast Syria with White House blessing to develop and exploit Syria's oil fields under their control", he says. "The US and their Kurdish proxies in east Syria currently hold over 90% of Syria's oil and half of its gas, as well as a majority of its fertile agricultural areas."

The US military veteran notes that "many of the local Arab tribes in east Syria, already resentful of US-backed de facto-Kurdish rule over Arab-majority areas, expressed outrage and unacceptance of this theft of Syria's energy resources."

"Secondly, there are reports that following a meeting between the SDF commander and US forces with the leaders of the local Arab tribes over the issue, several of those tribal leaders who had objected to the oil deal and refused to engage with the Americans were assassinated", Sleboda points out.

Three sheikhs from Deir ez-Zor were killed in less than a week, he recollects:

·         on 2 August, Sheikh Muttshar al-Hamoud al-Hifl was killed in the outskirts of Al-Hawayej with his relative Sheikh Ibrahim al-Hifl also being wounded in the incident.

On 11 August, sheikhs and elders of the Arab Al-Uqaydat tribe met in Deir ez-Zor, stating that the US-led coalition was responsible for murdering tribal sheikhs in the province. They demanded that the region be cleared of the SDF, with local control being returned to the Syrians. "Leave the Arab region to the Arabs”, they highlighted. Earlier, Syrian Arab tribes' representatives broke into the local SDF headquarters in the cities of Deir ez-Zor, Diban, and Al-Hawaij in the province of Deir ez-Zor.

"The tribes now hold the US and SDF responsible for the assassinations, began forming a local 'army' of tribes to resist US-SDF occupation, seized back several villages, and issued a one month ultimatum for the US and SDF forces to leave their region entirely", Sleboda notes.

According to the military analyst, this is extremely significant given that up until recently the Al-Uqaydat and Al-Baqara tribes had sided with the US and grudgingly worked with the SDF to hold east Syria against the Syrian government in Damascus.

He highlights that Al-Uqaydat, in particular, is the largest tribe in Deir ez-Zor and reportedly in all of Mesopotamia, with its members having a presence on both sides of the Syrian-Iraqi border.

"This represents a sudden and complete local reversal in allegiance for the most significant Arab tribes in east Syria, from the US to Damascus", Sleboda suggests. "If this local Arab uprising continues, it has the potential to make the US-Kurdish SDF occupation of Arab-majority east Syria unfeasible with the current relatively light military footprint of only several thousand US troops."

These developments could leave the US with only two options: to either reinforce their occupation with a significantly larger military force capable of suppressing the local Arab population or withdraw entirely, according to the US veteran.

Meanwhile, the Syrian region in question appears to be of utmost importance to the US.

"This territory encompasses nearly a third of Syria, over 185 thousand square kilometers, 90% of the Syria's oil, over 1/2 of its gas, its three largest electricity producing dams and its most fertile important agricultural territories", Sleboda explains. "This gives the US a stranglehold over Syria's most important resources, preventing consolidation and rebuilding of the country, which it is now using to try to force regime change in Damascus by economic deprivation and blackmail. The region of eastern Syria is also accessible and can be supplied and reinforced by US military bases in Iraq."

The idea to occupy al-Hasakah and Deir ez-Zor was first voiced in a declassified 2012 Defence Intelligence Agency's (DIA) report that envisaged the possibility of creating a "Salafist principality" in the provinces "in order to isolate the Syrian regime", stressing that this was "exactly what" Western powers supporting the opposition wanted. However, instead of "Salafists", this region is now held by the US-backed and Kurdish-dominated SDF.

"The US government knew that their proxy war against the Syrian government, illegally arming, training, and salarying sectarian Islamist and jihadist militants for regime change would stretch the Syrian government's forces thin and force them to consolidate to protect the coastal areas of the country where the majority of the population lives", the security analyst observes.

Sleboda further elaborates that the resulting power vacuum allowed ISIS [ISIL/Daesh*] to spread from western Iraq into east Syria, where they worked with the US-backed 'rebels' for a time, before seizing east Syria for themselves and declaring their Salafist caliphate.

"This gave the US the pretext of 'fighting terrorism' that they needed to bomb, invade and eventually militarily occupy east Syria themselves, despite their 'assistance' not being wanted and refused by the sovereign government of Syria in Damascus", he underscores.

Besides this aim, many American neocons believe that their control of east Syria may somehow weaken the Iranian influence in the country, thus further disrupting the so-called Shia Crescent. However, that's not the case, according to Sleboda.

According to the military veteran, the US can occupy east Syria almost indefinitely – as they did in Afghanistan and Iraq – unless the economic and political cost in American lives leads to sufficient political outrage at home.

The weak point here is that the US has failed to topple the Syrian government in Damascus and install their own compliant puppet regime akin to those in Baghdad and Kabul, Sleboda remarks, adding that the Russian military involvement ensured that this cannot happen.

"As a result, local resistance and the resulting cost will inevitably be higher", he opines. "Hopefully that will make the period of US military occupation shorter."