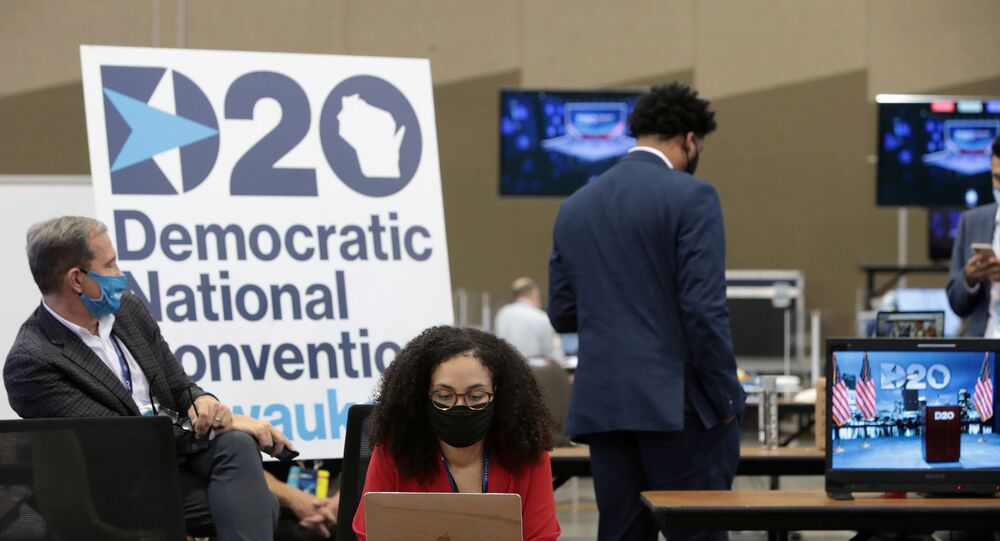 The Democratic National Convention kicked off on 17 August in a virtual format to formally pick the party's nominees for president and vice president in the 2020 US election. International political observers have weighed up whether the event will help Joe Biden and Kamala Harris further galvanise American voters.

The event's first day was marked by a taped speech of ex-First Lady Michelle Obama in which she lambasted Donald Trump, insisting that he is "the wrong president" for the US: "He has had more than enough time to prove that he can do the job, but he is clearly in over his head," she claimed.

Obama's rant prompted yet another partisan clash with Trump slamming the former first lady for not delivering her "extremely divisive" speech live: "She was over her head, and frankly she should’ve made the speech live, which she didn't do", he said.

Will Virtual Convention Give a Boost to Dems?

"Party conventions have largely been infomercials for the major party candidates for the past several decades, and this convention will be no different", says Barry Eidlin, assistant professor of sociology at McGill University. "The big difference, of course, is that the coronavirus means that the convention will be shorn of the pomp and pageantry that draws in viewers and generates energy for the party faithful".

According to him, one will get a sense in the next few days "of the degree to which people want to tune in to watch various party leaders given their speeches via videoconference, and the degree to which this format generates the usual post-convention 'bump' for the candidates".

"In normal times, a convention gives a substantial boost to the party that holds their national convention there", echoes Doug Wead, an American political analyst and New York Times bestselling author. "This time, because Biden won't even be in the state, it may not provide the same boost".

If President Trump can visit Wisconsin today, why can’t Joe Biden on Thursday?

​Wisconsin is Litmus Test for Biden and Trump

Wisconsin remains a crucial state for both Democrats and Republicans. It is highly unlikely that Joe Biden or Donald Trump can win without winning Wisconsin. While polls show Biden leading at the moment, the race will be close there, foresees Eidlin.

According to a new Morning Consult poll, Biden leads Trump 49% to 43% among likely voters in Wisconsin, while a nationwide survey indicates that heading into the Democratic National Convention, the former vice president leads Trump by 8 points.

Nevertheless, the pollster admit that during the previous campaign Hillary Clinton also had a 6- to 8-point lead over her Republic rival in Wisconsin which did not prevent Trump from winning the state by less than a percentage point.

The enthusiasm we’re seeing on the ground today for this President is outstanding. THANK YOU, Wisconsin! @realDonaldTrump pic.twitter.com/l02lGgsHuY

​"In 2016, Clinton lost in part by taking the state for granted and not campaigning there, while running on a record that failed to inspire core Democratic voters—most notably Black voters in Milwaukee, where the 2020 party convention is being held", Eidlin elaborates.

He believes that Biden is unlikely to take Wisconsin for granted as Clinton did. Still, the professor highlights that the ex-vice president's policy record, along with that of his running mate, Kamala Harris, "differs little from what Clinton was offering four years ago".

"If the Biden/Harris ticket can boost Black turnout in Milwaukee beyond what Clinton was able to do, then it will be difficult for Trump to carve a path to victory in that state", he predicts.

Meanwhile, on Tuesday, the second night of the DNC convention is going to feature remarks by the 39th President of the United States Jimmy Carter and the 42nd President Bill Clinton, among other speakers. The theme of Tuesday’s program will be “Leadership Matters.”

"A moment like now demands real leadership", the convention's official site claims. "A leader who has the experience and character to meet the moment. A leader who will unite us, tell us the truth, take responsibility, listen to experts and be an example for the nation".

No matter how pompous and persuasive the Democratic convention will appear to be, conventions do not win elections, but on-the-ground campaigning does, according to Eidlin.

"A lot can and will still happen between now and November, so by the time most voters actually get to casting their ballots, the conventions will be a distant memory for most", he concludes.

'No One More in Touch Than Celebrities': Choice of Eva Longoria as DNC Emcee Mocked on Social Media