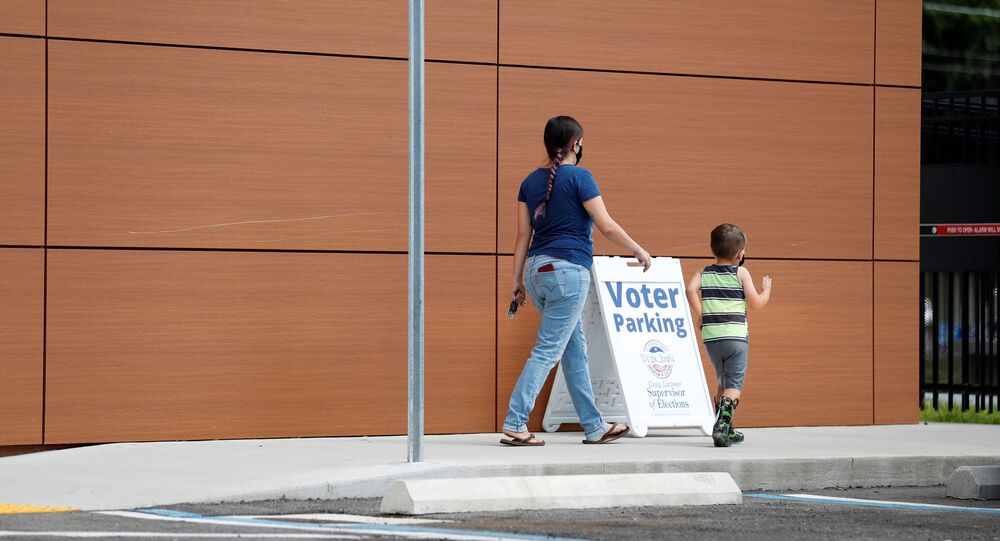 US House Speaker Nancy Pelosi has called the US House of Representatives back from its vacation recess to return to session, also summoning the Postmaster General and the chairman of the Postal Service Board of Governors to testify before Congress as the controversy over mail-in voting gains momentum ahead of the November election.

The US Postal Service (USPS) earlier warned state election officials that difficulties could emerge in voting by mail, following sudden changes in delivery policies by Postmaster General Louis DeJoy and financial troubles that the agency has been struggling with, partially exacerbated by the coronavirus-induced crisis.

President Donald Trump, for his part, has repeatedly claimed that the upcoming presidential election would be "the most rigged election in history" if the US uses mail-in ballots in November, and even floated a delay in the election to prevent any fraud that might result from mail-in voting.

Since POTUS stepped up his rhetoric against mail-in voting, he has consistently been accused by Democrats of trying to "sabotage our democracy".

Dr Djene R. Bajalan, political scientist and a Missouri State University professor, has offered his views on the potential challenges of mail-in voting.

Sputnik: What do you see as the main challenges in terms of mail-in voting in the US?

Dr Djene R. Bajalan: The challenge to mail-in voting can be looked at on two levels. The first and most obvious level relates to the US Postal Service’s ability to cope with the larger number of people wanting to vote by mail due to the pandemic. The appointment of Louis DeJoy to the position of postmaster general and some of the changes that he has implemented are – according to critics – hampering the ability of the post office to operate effectively. This could mean that mail-in ballots do not arrive on time which would, in turn, create a chaotic situation on election night.

However, there is also a broader political question relating to mail-in voting. “Absentee” ballots have existed since the Civil War and were initially used to allow soldiers to vote in their home states. Today, different states have different regulations pertaining to absentee voting. 16 states require voters to provide an “excuse” as to why they are unable to vote in person on Election Day. The remaining 34 allow anyone with the right to vote to request a mail-in ballot. However, five states have automatic mail-in ballot systems that have been used in the past – Colorado, Hawaii, Oregon, Washington, and Utah. This means that ballots are automatically sent out to voters. The Trump administration has expressed its hostility towards the expansion of automatic mail-in ballots to other states, claiming that this system will result in fraud. However, there is no evidence that this is the case.

Many on the left believe that the administration’s hostility to automatic mail-in ballots is an attempt to make it harder to vote. Voter suppression is not a new issue. As journalist Ari Berman has noted, the Republican Party has, in recent years, worked to repress the votes of minorities (who tend to vote Democratic) through mechanisms such as ID laws and registration rolls purges. Hence, the administration’s hostility to automatic mail-in voting is seen within the broader context of what many on the left believe is the Republican Party’s hostility to electoral democracy.

Another fear on the left is that, should the changes implemented in the US Postal Service create chaos on Election Day, it might delegitimize the election result. Due to the nature of the Electoral College, US elections do not come down to the popular vote, but rather a few swing counties. In 2000, there was a great deal of controversy pertaining to the election of George W Bush, who, despite losing the popular vote, was elected president following chaos in the vote-counting process in Florida. Indeed, the Supreme Court ultimately intervened to stop the vote-counting process, allowing Bush to assume the presidency. If there are problems with mail-in voting in 2020, we could see a similar situation.

Sputnik: The United States Postal Service is encouraging voters to request their mail-in ballots at least 15 days in advance, if not more, due to the significant expected increase in mail voting, while Nancy Pelosi is calling upon the House to return to session later this week to vote on the “Delivering for America Act”, which prohibits the Postal Service from implementing any changes to operations or level of service it had in place on January 1, 2020. How do you assess this controversy?

Dr Djene R. Bajalan: It seems that Congressional Democrats are panicking about the potential for chaos during this election. The polarized nature of the United States at the moment meant that this was already going to be a difficult election. However, the pandemic and the recession have only exacerbated these issues. Democrats clearly hope to roll back some of the reforms that DeJoy has implemented in the US Post Office, which they feel are undermining its functioning.

Sputnik: After President Trump tweeted the idea of delaying the general election to avoid mail voting, a post circulated on Facebook, Instagram, and Twitter advising people to be aware of the steps they should take to be sure their vote is counted: “The Postal Service is telling Americans to give every ballot 14 days round trip. That means if you want to vote by mail, and you want to feel good about your vote being counted, Election Day is not November 3. Election Day is Tuesday, October 20th. Spread the word”. How confusing could such posts citing specific dates as deadlines be given the variation between states?

Dr Djene R. Bajalan: It is understandable that the Trump administration wants to ensure maximum turnout for its base. As I noted, American presidential elections do not come down to the popular vote and the president has never been popular. He was elected despite receiving 3 million less votes than Hillary Clinton and his approval rating has hovered around 40% for most of his time in office. Thus, it is critical for him to mobilize his base – especially in swing states. This means ensuring that older voters – many of whom are susceptible to COVID 19 – vote.

Sputnik: Several states are considering expanding absentee voting and some senators are calling for options to vote by mail for all states in the presidential election. While mail-in voting is a long-debated topic, it’s now being seen in a new light as the COVID-19 outbreak creates a new normal in the country. What's your forecast for the future of this option in the United States?

Dr Djene R. Bajalan: As I noted, mail-in ballots are not new by any means, although the COVID pandemic has greatly increased pressure to expand this as an option. However, voting is an issue for the states to manage, so I suspect we will see a lot of variation. It is possible that we will see the spread of no-excuse absentee voting to the remaining 16 states that do not currently allow it, especially if the pandemic drags on. However, automatic mail-in ballots will no doubt remain controversial with Republicans opposing it and Democrats supporting it.