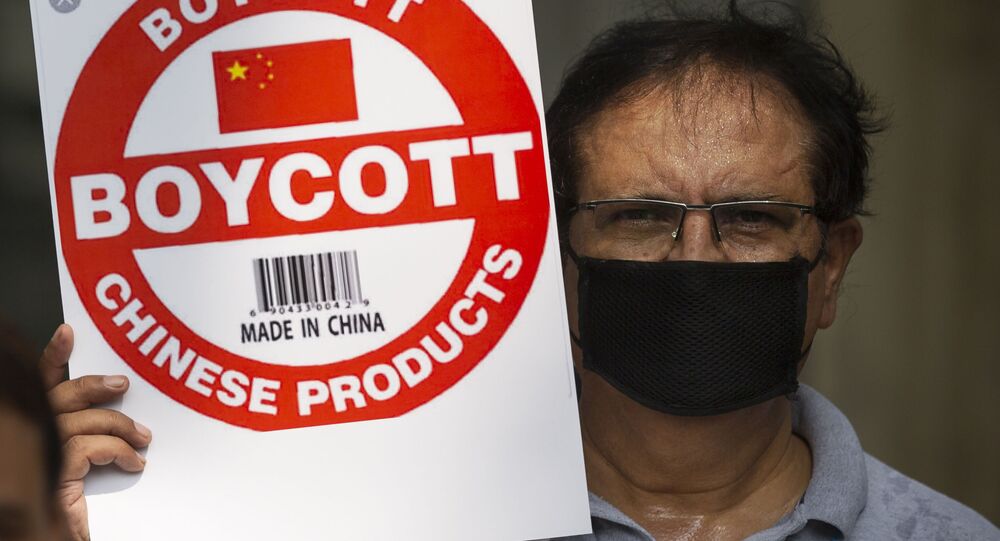 New Delhi (Sputnik): The Indian government started banning foreign apps, primarily from China, for security reasons. The Narendra Modi government has now released a list of 101 defence items including attack helicopters, and missiles that will have to be produced domestically.

The Indian government has mapped out a plan to roll out its “self-reliant India” programme to curb defence imports, dependency on foreign tech such as 5G, and mobile applications with the help of the country's leading tech institutes and labs.

Sputnik spoke with Professor V Ramgopal Rao, Director of Indian Institute of Technology-Delhi, as the institute is closely working with the government to develop indigenous defence technologies-based equipment, 5G technology and artificial intelligence.

Sputnik: India trails behind major economies in developing impactful home-grown technology. Do we have a plan to overcome these shortcomings?

Professor Rao: In the last 10 years, the institution witnessed exponential growth in research during its transition from an undergraduate institute to a research institute after 1990. But the research remained only on papers/journals, without making an impact on society.

Now, for the last five years, one of the focuses has been shifted to “research to wealth”, which means we started converting this knowledge into wealth. For commercialization or setting up a start-up, patents are important. Therefore, this aspect is starting to pick up gradually.

Sputnik: We witnessed the shortcomings of our institutions in the initial months of COVID-19 when we did not have basic equipment such as testing kits. What did you learn during these tough times?

Professor Rao: If you look at the last three months, we came up with the world's cheapest COVID-19 detection kit - commercially available in the country.
We have transferred the technologies of lightweight Personal Protective Equipment (PPE) having microbial coatings, anti-viral coatings to start-ups; upon which they have produced over four million PPEs. Large fraction of these productions are being exported.

In terms of research work, we have started connecting institutions around us in the last three years, which includes partnership with AIIMS, the country's apex medical research institute; Indian Council for Agricultural Research, and National Institute of Immunology, to find solutions to pressing issues.

Sputnik: What is the importance of artificial intelligence for India in the future? How are Indian tech institutes preparing students for the same?

Professor Rao: In the last senate (board) meeting of the institute, we have approved a new school for Artificial Intelligence which will become operational soon.

Even during COVID-19 times, several departments and students are using AI to detect the infection through X-ray of the patients by developing an image analysis algorithm.

In the civil engineering department, students and faculty members are developing AI algorithms for new materials. In fact, people in the centre for atmospheric sciences at IIT Delhi can predict the pollution level in any particular date based on the last 15 years of air pollution data.

Sputnik: Is IIT working on India's own 5G technology?

Professor Rao: IIT Delhi is part of the national project on 5G where multiple institutions are involved, which is funded by the department of communications and Information Technology.

© AFP 2021 / INDRANIL MUKHERJEE
Are Huawei Security Concerns Paving Way for Reliance Jio to Go Global with India-US 5G Partnership?
IIT Delhi also collaborates with Erricsson - there is an Ericsson testbed in IIT Delhi for 5G. The institute, jointly with Reliance Jio and Erricson, demonstrated autonomous vehicle technology in the last India Mobile Conference. So, we have technology for autonomous vehicles based on 5G technology.

Sputnik: How would you describe India's potential in the software sphere and in developing home-grown tech for defence considering the current nationalism-fueled atmosphere?

The institutes are closely participating in Atmanirbhar Bharat or self-reliant India mission as we are now connecting with multiple labs in the country, particularly in the defence sector, with the aim to reduce imports.

World’s military powers such as Russia, US and China are producing the requirements in their own country while India is importing, as defence production is not very attractive and these defence agencies never interacted with academia or institutions. All of that is now being rectified.

In case of Chinese apps which the government banned, we will be able to replace these in six months. We have already developed a replacement of TikTok and Camscanner. While software or IT-related things can be replaced in no time, technology related things take time.

Sputnik: How would you describe Trump's suspension of the H-1B visa policy and its impact on students of India’s top institutes?

Professor Rao: For the past four years, less than five percent of our students have gone abroad and most of them go to top class universities. So, they do not have any problem with Trump’s H-1B visa policies.

© Sputnik / Ekaterina Chesnokova
India's Top Corporate Leader Urges US To Recognise Cross-Border Talent Mobility in H1B Visa Issue
IITs do not get affected by this. I am not hearing any kind of complaint from anybody due to this policy.

Sputnik: Shortage of funds for research were major hurdles in the past. As you are saying that industries are coming forward, can we say that there are no shortage of funds anymore in the country's top institutes despite COVID-19 induced economic slowdown?

Professor Rao: It’s not true. There are funds cut everywhere. The government isn't getting much revenue as tax collections have gone down. However, despite cuts in government funds, industry funding has gone up during COVID-19.

In the last three months, we received over a million dollar funding from industries. Though industries are pitching in, overall the situation is not going to be very good for research funding.

Those who have money do not want to spend it knowing how bad things can get. This is not a good year but we are trying to see how we can tide over the crisis.