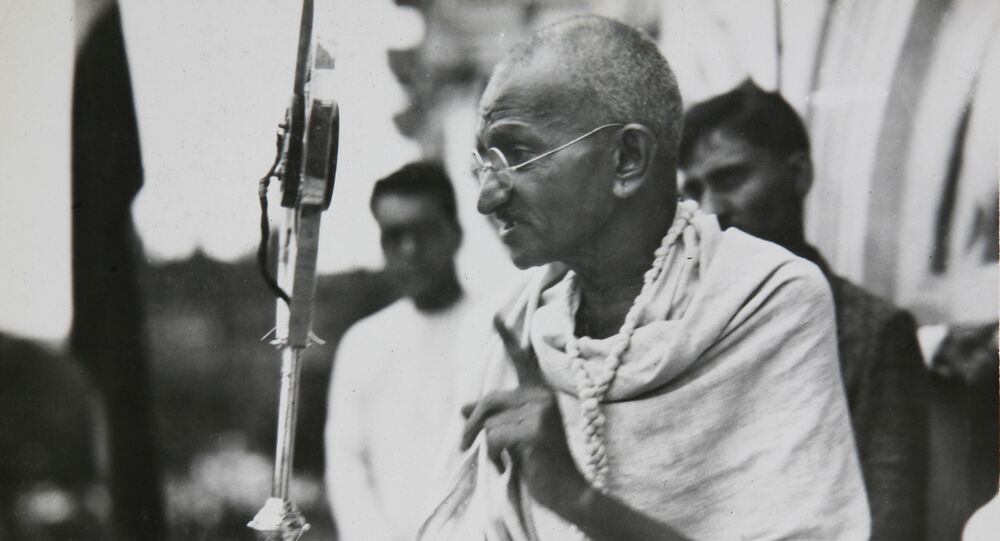 Liberate Gandhi from ‘Mahatma’ Jacket to Save Him from Political Exploitation, Great Grandson Says

New Delhi (Sputnik): Mahatma Gandhi is the iconic figure of the Indian freedom movement who advocated ‘Satyagraha’ or passive political resistance, as the weapon to take on the mighty British Empire. Six months after India gained its freedom, Gandhi was shot dead by a religious fanatic during a prayer meeting in New Delhi.

As India celebrates its 74th Independence Day on Saturday (15 August), Sputnik talked to Mahatma Gandhi’s great-grandson, Tushar Gandhi, about the relevance of the iconic leader and how his principles and practices continue to inspire generations. Sixty-year-old Tushar is the son of Arun Manilal Gandhi, who is the son of Manilal Gandhi, Mohandas Karamchand Gandhi, or Mahatma Gandhi’s second son.

Tushar Gandhi: I believe strongly that Mahatma Gandhi can never be irrelevant because what he practised was not something that was mentioned in the discovery. His practices were based on the cornerstones on which civilisation have been formed, through love, unity, and inclusiveness, and compassion. As long as those remain relevant to humanity, he can never become irrelevant. If you look at it from the very philosophical point then he doesn’t become irrelevant because he is personified by those qualities. Politically, the question can definitely be asked, because politics is something which is inherently an opportunistic, exploitative institution, and in that kind of a situation where power is the only sole objective, these qualities of truth and compassion, inclusiveness - all that - become irrelevant.

There are two answers to this question - on the political point of view he could be consigned to the garbage, because he belongs to that; it is not a new phenomenon. But if you look at him from the ideological, philosophical point of view, he can never be irrelevant.

Sputnik: Do you think that Mahatma Gandhi has been reduced to the status of a political brand ambassador by Congress and now BJP?

Tushar Gandhi: Whenever he has been trivialised in this kind of a manner he has always been exploited. Basically when you don’t have the qualities within you, you need to associate with them in some manner, both political parties always have association of desperation. When morally and ethically you can’t show those qualities in your own practices, you need an association with him.

Sputnik: How could Gandhi be made relevant for future generations?

Tushar Gandhi: What we need to understand is the man and the way he applied his ideology. The other thing is that his ideology and his methods of working are not something that can be regimented. You can’t have a set rules or formulae of Gandhian practice. A man who said "my life and my belief is evolving through my experiment", his principles and ideologies can never be codified. The problem is it that it has always been, sort of, frozen in the timeframe of his life and not been allowed to evolve with time. That’s why the younger generation find that they cannot identify with some of the practices that have now been made into the gospel of Gandhi. Wherever his ideology has been allowed to evolve to produce solutions for the problems and issues that face the youth today, they have accepted it. I think that is the way forward.

© AP Photo / Altaf Qadri
A schoolgirl holds a placard as they participate in an event to celebrate the 150th birth anniversary of India's independence leader Mahatma Gandhi in New Delhi, India, Tuesday, Oct. 1, 2019. India’s biggest political parties are vying for the political legacy of iconic independence leader Mahatma Gandhi on the 150th anniversary of his birth.

Sputnik: Do you think the present generation is becoming disillusioned?

Tushar Gandhi: What is there for aspire for – democracy has been trivialised the world over, autocrats have completely negated the basic principle of democracy and freedom in their lust for power. So youth is disillusioned about it. The fact is that we keep forgetting what Gandhi told us and all the leaders who have been icons in our modern times, has always told us, that it is our responsibility to create the ideal world. It is the individual’s responsibility to create the ideal world and today we have a whole breed of leaders who want to be autocratic and iconised. They say, "you don’t have to do anything, I will do everything". How can youth thrive in an ideal democracy when the people they think of as successful are autocratic? I think what will make a difference is when we start believing that we can be the change, we can become the change, the change would happen because of us and not because of somebody else.

Sputnik: You mean to say that that kind of leadership has to emerge from youth?

Tushar Gandhi: From the individual, from every individual who believes in the basic principles [...] the duty is not of performing some rituals, the duty is of taking responsibility.

Sputnik: Did you feel that Mahatma Gandhi should be liberated from political parties?

Tushar Gandhi: I have always felt that Gandhi needs to be liberated first from the straightjacket of Mahatma and make him into a more believable mortal, human being. If that is done, he will not be attractive enough for political exploitation - who wants to iconise a common person? In politics you want only to exploit myth. That’s why Ram (Lord Ram) has taken centre-stage. You don’t want Ram’s quality that made him into a godly person. You want the iconised figure that is unbelievable, un-human, so that you can worship him.

Mahatma Gandhi was a lawyer by profession, but jumped into a nationalist movement to end the British imperial rule in India.

© AP Photo / James A. Mills
Crowds gather to hear Gandhi speak next to the Sabarmati River, c. 1930. Photo from a period album collected by AP reporter James A. Mills, while Mills was covering Mahatma Gandhi and his followers.

The man, with an irresistible attraction to a life of simplicity, was called a half-naked 'fakir' (one who has renounced his worldly possessions). At the height of the Indian independence movement he gave up his usual attire of a shirt and hat for a simple white loincloth, which remained his trade mark until his death on 30 January, 1948. He was shot dead by a Hindu fanatic named Nathuram Godse while arriving for a prayer meeting in New Delhi. A grateful India honoured Gandhi with the title ‘Father of the Nation’.