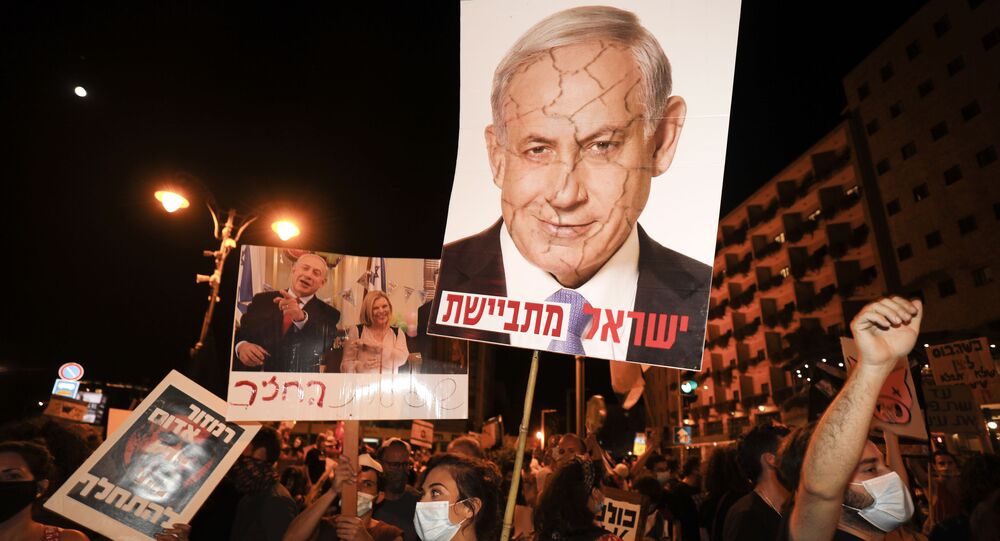 Moved by Fear and Politics, Netanyahu Blows Threats Against Him Out of Proportion, Ex-Adviser Says

While Netanyahu might genuinely fear for his safety, following threats directed at him and his family, a former adviser says another assassination of an Israeli PM is highly unlikely, especially given that the security around him is too tight for anyone to break it.

Last week, Israeli police revealed the identity of a woman behind a fake Facebook account that she used to incite violence against Prime Minister Benjamin Netanyahu and called to assassinate him.

The country's police have also detained a 70-year-old man, who used the social media platform to encourage people to hurt the PM.

Fearing for His Life?

In recent weeks verbal attacks and calls to physically harm the PM have intensified in light of mass protests sweeping Israel following the government's perceived failure in tackling the repercussions of COVID-19 which has already claimed the lives of more than 600 people and sent the nation's unemployment rates soaring.

During these mass demonstrations crowds called on Netanyahu to resign, labeled him "crime minister", and promised to settle accounts with the PM, accused of being responsible for the nation's political and economic woes.

Tensions have been simmering at such a high level that Netanyahu even took to Twitter to alert his followers of the threats he has been facing. He showed a video that featured multiple incidents where protesters sent him a death wish and reminded supporters of 1995, when Israeli Prime Minister Yitzhak Rabin was gunned down by a Jewish extremist, heavily influenced by propaganda from religious circles against the PM.

Even the country's President Reuven Rivlin has addressed the situation, saying a scenario where a prime minister could lose his life was not "far-fetched".

The liberal camp, however, rushed to downplay these comments and the Israeli media published numerous reports suggesting that Netanyahu had exaggerated the magnitude of threats directed at him. But Aviv Bushinsky, who served as Bibi's media adviser, says the truth probably lies somewhere in the middle.

"Netanyahu is at times moved by a genuine fear for his safety", he said recalling an incident in 2003, when he cancelled a planned trip to Dubai because of his security concerns.

"But it is difficult to estimate how much that fear moves him today, especially given that he is one of the most secured people in the world", he added.

To back up his claim, Bushinsky refers to Netanyahu's recent outing in Ramle, a town in central Israel, where he visited a local market and ate a portion of falafel, surrounded by his security personnel.

"Israel learned from past mistakes following two political murders [that of Rabin and that of Rehavam Zeevi, Israel’s ex-minister of tourism, who was killed by a Palestinian terrorist in 2001 - ed.]. The security around the PM is super tight, and had he really felt threatened, he wouldn't have roamed that freely whereas Shin Bet [Israel's security agency - ed.] would have boosted the amount of bodyguards around him. Given the fact that that didn't happen, there is a chance that Netanyahu is exaggerating the threats, using them for political purposes".

By "political purposes" Bushinsky is alluding to Netanyahu's alleged desire to depict himself as a martyr, persecuted by the country's left-wing circles, a trick he pulled last November when it was decided to indict him in a series of graft probes that include buying positive coverage and receiving illegal gifts from a rich donor.

Critics have also accused him of using the these calls to violence as a tool to distract the public's attention from Israel's economic woes, especially given that his approval ratings have dropped from 70 to 46 percent.

And some have even hinted that Netanyahu is already laying the groundwork for yet another round of elections, the fourth in under two years.

"By referring to protests [against him] as coronavirus incubators, by saying that protesters are being paid by the left-wing circles, and by claiming that the masses who stage rallies in front of his residence are handled mildly by the police, he continues to divide an already split society", said Bushinsky, referring to "old tactics" used by the PM in earlier elections.

The only question is whether that same gimmick will help Netanyahu now, at a time when his ratings, and the popularity of his party Likud, continue to sink.