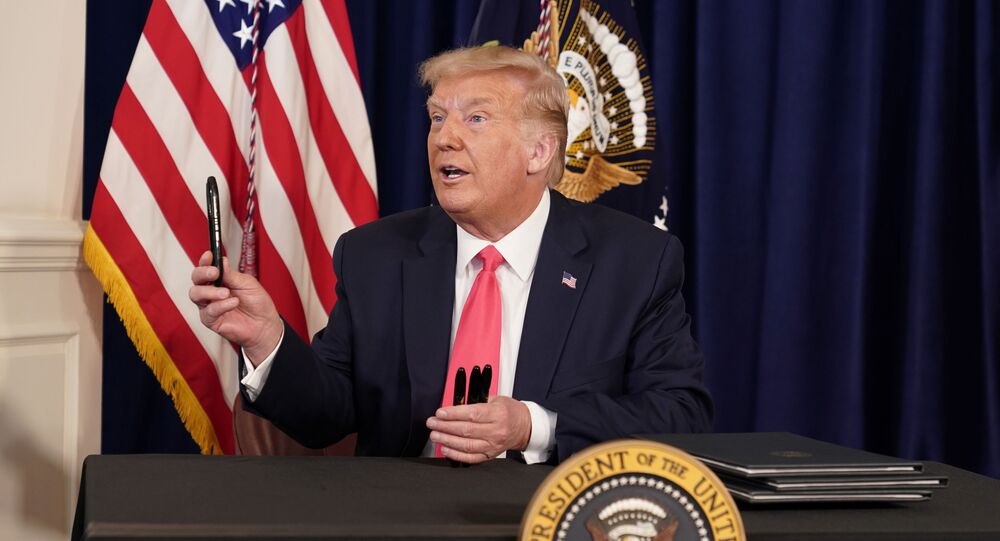 US President Donald Trump on Saturday bypassed Congress and signed an executive order and three memoranda on COVID-19 relief, a move which has been called “absurdly unconstitutional” by Democrats. Trump’s tactical move is meant to undermine the Democrats, Dr. Jack Rasmus, a professor of economics at Saint Mary's College of California, told Sputnik.

The measures include a federal eviction ban, relief for student borrowers, a payroll tax suspension and a $400 per week unemployment benefit bonus to replace the $600 benefit that expired at the end of July and which had been provided by the Coronavirus Aid, Relief and Economic Security (CARES) Act that Trump signed in March.

"Democrats are obstructing all of it. Therefore, I'm taking executive action. We've had it,” Trump announced Saturday.

US House Speaker Nancy Pelosi (D-CA) and Senate Minority Leader Chuck Schumer (D-NY) have been quick to slam Trump for bypassing Congress, with the latter calling the executive orders “unworkable, weak and far too narrow” and “absurdly unconstitutional.”

While Democrats have been advocating for a $3 trillion rescue package known as the Health and Economic Recovery Omnibus Emergency Solutions (HEROES) Act, Republicans have only proposed a $1 trillion bill called the Health, Economic Assistance, Liability Protection and Schools (HEALS) Act.

“It’s a tactical move by Trump and his team,” Rasmus, the author of “The Scourge of Neoliberalism: US Economic Policy from Reagan to Trump,” told Loud & Clear host John Kiriakou on Monday.

According to Trump, most of the benefits would be funded with disaster relief money from the Federal Emergency Management Agency, which will provide $300 a week to the unemployed. Trump also called on states to chip in an extra $100 in weekly benefits.

“Why would you want to reduce unemployment checks when the economy is slowing once again? That’s such nonsense. As I said way back in March, the government’s got to spend $4 trillion … and in March we really only spent $1.5 trillion that’s gotten into the economy under the CARES Act,” Rasmus explained.

“This is just PR … it’s a way for the Republicans and Trump to say ‘screw you’ to the Democrats … It’s all bargaining tactics,” Rasmus added.