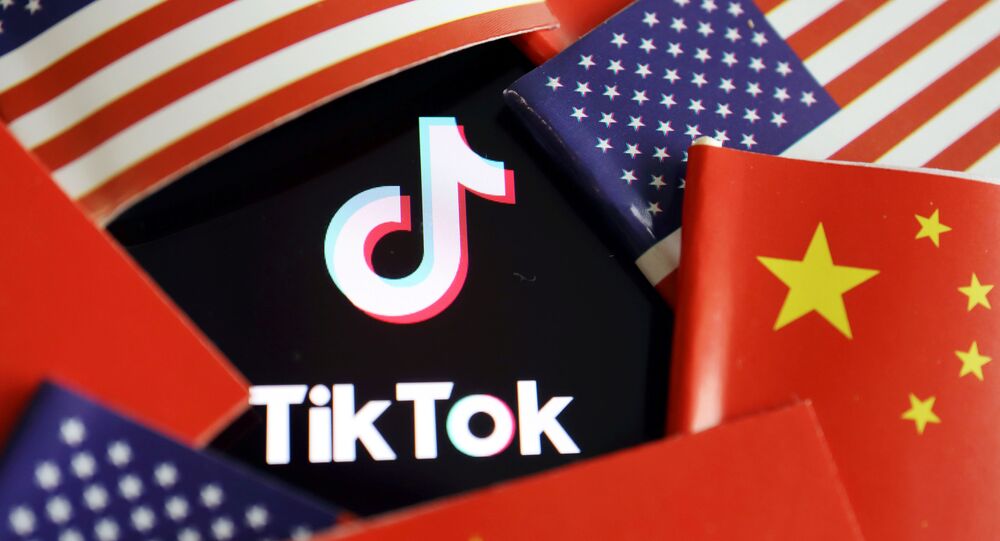 BRUSSELS (Sputnik), Luc Rivet - Chinese video-sharing app TikTok joined the ranks of tech companies the United States came after over alleged data privacy concerns, but its threat to national security, emanating from the alleged collusion with the Chinese government, might be overestimated.

Last week, the parent company of TikTok, China's ByteDance, was faced with an ultimatum of either to sell the app to a US investor or be banned in the territory of the United States. When announcing the warning this past Friday, US President Donald Trump said it was due to data privacy concerns and the threat it poses to the country's national security. He set September 15 as the deadline for the Chinese company to make a choice.

US tech sharks Microsoft and Apple then expressed interest in buying the app, with the former apparently being in touch with the US government on the matter and planning to wrap up the accession talks in September.

TikTok is currently the most popular app in Play Market for Android devices and the second most popular entertainment app in AppStore for iOS devices, with more than 2 billion downloads collectively and over 400 million active users.

The app is designed to produce and share short video clips. It is predominantly popular among young people and is represented in 75 languages in close to 160 countries. Its engine is designed in a way to show users the clips that they are most likely to enjoy based on their watch history and location.

Before TikTok There was Huawei

TikTok is not the first company accused by Washington of spying on the US. Huawei, practically a tech octopus with tentacles pretty much on all sorts of devices as well as the innovative 5G networks, has been accused of collaborating with the Chinese government and blacklisted last May on the backdrop of a fierce US-Chinese economic confrontation that ended up labeled a "trade war."

Big US companies like Google were banned from having business with Huawei. Moreover, Washington exerted pressure on European and other allies to follow the lead, which resulted in several countries banning Huawei from the 5G government contracts, including in Australia, the United Kingdom, Japan and New Zealand.

Last week, the European Commission urged companies in Europe to replace Huawei's service where possible with domestic companies. In fact, aside from China's Huawei, there are currently only two other companies in the world that offer complete solutions for 5G: Finland's Nokia and Sweden's Ericsson.

In the meantime, Huawei has become the number one seller of smartphones in the world, ahead of South Korea's Samsung. Paradoxically, the COVID-19 pandemic has helped the Chinese equipment manufacturer. Huawei has taken advantage of the early economic recovery in China to relaunch its activity, and the Chinese domestic market is huge.

The numbers tell it all: 55.8 million phones sold in the second quarter of 2020 for Huawei against 53.7 million for Samsung.

As was also the case with TikTok, no substantial evidence was provided to prove that the company colluded with the Chinese Communist Party.

US Has a Point

"The US is right in refusing to be dependent on a foreign network that would be controlled by Huawei. It is a matter of digital sovereignty for the world's leading nation in electronics and in the event of war", Axel Legay, a professor specialising in cybersecurity and artificial intelligence at the UCLouvain Polytechnics University, said.

The development of a structured network like 5G should be left to a company that a government can control and "disconnect" should the need arise, for example, in case of a conflict, according to the expert.

"The issue of espionage and the security danger Huawei poses to state and national security is also true in Europe", Legay continued.

Recollecting how the United Kingdom banned Huawei from developing its 5G networks earlier this year, the expert said that "For the EU, we must avoid our eternal discussions and take clear decisions, if we don’t want to lose ground on these new technologies of the ‘connected objects.’"

Meanwhile, the advantages of the 5G networks over 4G are undeniable, as explained by the professor. They are nearly 100 times faster and more precise, which is especially beneficial for AI-equipped interconnected devices such as smart home tools.

"These will change our lives. You will see robotic cars in airports, for transporting luggage or people, connected pallet trucks, connected cranes transporting containers automatically. The sky is the limit", the professor said.

There are already numerous pilot 5G networks across Europe, including one at Legay's university, which means that very soon our mobile connectivity can become as fast as WiFi. But before Europe and even the United States installed its first towers, China already had them since October 2019.

TikTok Only Drop in the Ocean of China's Espionage Tools

Thousands of Chinese students arrive in the US annually to study and then get recruited by the largest companies to often deal with sensitive information.

"Some are a great source of information for the Chinese Communist Party which controls the country", Legay said.

"For TikTok ... it is something else. It is a social network and espionage, in this case, is primarily commercial: geo-location of users and analysis of their consumption habits. What are they buying? Such information for tens of millions of consumers is a gold mine for clothing companies for example, for targeted advertising", the expert clarified.

Moreover, it is not only Chinese tech companies that "spy" on users, Legay emphasized, pointing, in particular, at Facebook which, he said, collects information on users in a non-consensual manner despite denying it.