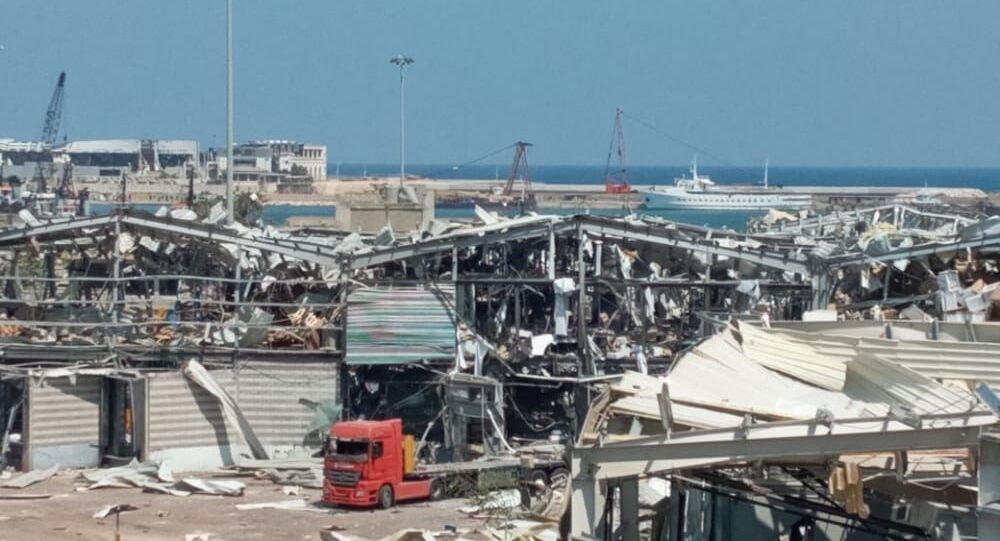 A devastating explosion of around 2,750 tonnes of ammonium nitrate that had been stored in a Beirut port warehouse since 2014 shattered the Lebanese capital on Tuesday, claiming the lives of at least 100 people and leaving more than 4,000 wounded. Lebanese observers have shed light on the tragedy as well as its impact on the people and the country.

The blast came out of the blue, like one of Lebanese essayist Nassim Taleb's famous "black swans", hitting the country's already plunging economy amid the coronavirus pandemic. With a destroyed port, demolished buildings, and a blown-out main grain silo, the damage amounts to billions of dollars in Beirut alone. In the aftermath of the explosion, the Lebanese government rushed to allocate 100 billion lira ($66 million) in emergency funds to cope with the unfolding crisis.

'It Was Terrifying When it Happened, It Was Scary Afterwards'

"To begin with, it was nothing that we have experienced before", says Marwa Osman, a lecturer, journalist, and former political TV show host. "I mean, I grew up between here and abroad, but in Beirut, I did witness the 1996 war, the 2006 war and every aggression between them. I never went through the shock that I went through yesterday. And I am pretty sure, that all five million Lebanese would say the same".

Being an eyewitness to the Tuesday tragedy, Osman recollects that at the beginning, she and her family felt a shake and then a powerful blast wave. The last thing they heard was the devastating sound of the explosion.

Everyone of you who visited #Lebanon in the past must have gone to Gemmayzeh street in Beirut.

This is Gemmayzeh now after the blast. @akhbar pic.twitter.com/frL98ZjRwN

​"It was terrifying when it happened", echoes Claude El Khal, an independent journalist based in Lebanon. "It was scary afterwards. Then we tried to understand what was going on. In some parts of the streets, you could not even see those streets. It was full of glass and rubble. And everywhere you looked you had people that were wounded with blood everywhere".

According to El Khal, people rushed to hospitals, but many of them were destroyed, so those still functioning quickly became overcrowded. "We saw at night doctors trying to help the wounded", he says.

To understand the scale of the devastation, one should bear in mind that Beirut's port is the main gateway to importing and exporting goods, elaborates Salma El Hajj, a writer and journalist from Beirut.

The Port of Beirut is a transit point between East and West and deals with 300 international ports with 3,100 ships docking there annually, he stresses, adding that the annual revenue for the Beirut shipping centre is estimated at $199 million.

"While the second-biggest port in Tripoli has been designated as the alternative, authorities are worried how the import-dependent country will bring in badly needed food, medical supplies and other goods", El Hajj observes.

The before and after of #Beirut port. No words... dozens of firefighters were on site when the explosion happened... #Lebanon
pic.twitter.com/ySbkwiZ1GT

​As Minister of Public Works Michel Najjar announced on Wednesday, the government is assessing the possibilities of the port of Tripoli in the north of the country. It is expected that it could serve as Lebanon's main shipping centre, as it is currently operating at just 40% of its capacity.

However, it is unlikely that Tripoli's port will be able to substitute the capital's harbour, which is much bigger, notes Dr Ahmad Merei, a Syrian MP and lecturer at Damascus University. According to him, the destruction of the Port of Beirut will affect not only Lebanon, but also Syria, Iraq, and even China.

To complicate matters even further, the country has lost its grain stock stored in the port, which is especially painful given that Lebanon imports 80% to 90% of its cereals, highlights Marwa Osman.

However, according to Lebanese Minister of Economy Raoul Nehme, the country has enough grain for about a month. “There is no bread or flour crisis”, the minister asserted in an interview with Reuters. “We have enough inventory and boats on their way to cover the needs of Lebanon on the long term”.

Lebanese Economy Has Been Destroyed for Years

The blast has exacerbated the already dire situation caused by the plummeting lira, economic downturn, and the COVID-19 pandemic, summarises Romanos Raad, ambassador at large for the International Human Rights Commission.

"The Lebanese economy is and has been destroyed for several years and now with this explosion the people are and will suffer huge financial losses as their homes are destroyed they are unable to withdraw money to make repairs or even be hospitalised", the ambassador says. "The Lebanese government is bankrupt and it is very difficult without the international banks and the international community to be able to reconstruct the port or even help the people".

The situation is "very sad", given that banks and the Lebanese government are not allowing people to withdraw their money from the banks to be able to cover the damages or expenses, the diplomat underscores.

"Lebanon has already been struggling under the weight of its economic meltdown, with the rapid devaluation of the lira and a soaring exchange rate on the black market fuelling inflation, shuttering businesses and plunging many people into unemployment and poverty", admits Salma El Hajj.

She cites the fact that the lira’s devaluation by some 80% against the dollar since August "has made imports prohibitively expensive, forcing the central bank to dip into its reserves to subsidise wheat, fuel and medicine". Fuel shortages and bread lines have become common, the writer adds.

"It is devastating", notes Dr Wassim Shahin, the dean of the Beirut-based Adnan Kassar School of Business. "Physical losses and damages of over $2.5-3 billion. Additionally, losses have affected the service sector, tourism, airport activity, port activity, shipments of goods and services, among many others. Lebanon was already suffering from COVID-19 and a stagnant economy. This explosion is very hard to adjust to in the short-term".

The Lebanese observers pin their hope on the global powers, saying that the country will not be able to get back on track without a helping hand.

The international community should step in and consider at least partially lifting the sanctions on Lebanon so that the country can deal with the consequences of the recent tragedy, suggests Ambassador Raad.

"The partial [lifting of] sanctions would help if people are able to wire transfer or withdraw money to be able to cover losses and pay employees, even university and hospitals", he notes.

The US Office of Foreign Assets Control (OFAC) has implemented a Lebanon sanctions programme since 1 August, 2007, "blocking property of persons undermining the sovereignty of Lebanon or Its democratic processes and institutions". For its part, the EU slapped sanctions on the Mediterranean country over the assassination of ex-Prime Minister Rafiq Hariri in 2005.

"Lebanon is currently under a big threat in terms of its political identity, in terms of its state, in terms of solidarity among the Lebanese communities. This is because the economy currently has no more resources. Lebanon currently has $100 billion in foreign and domestic debt and has no way out of [this crisis]. Israel and the US prohibit big gas companies from doing business with Lebanon. We are in a great crisis. I believe that we need help from Arab states, as well as the international community, especially on the Chinese and Russian level, to find a solution", says Dr Wafik Ibrahim, professor at the Lebanese University and political analyst.