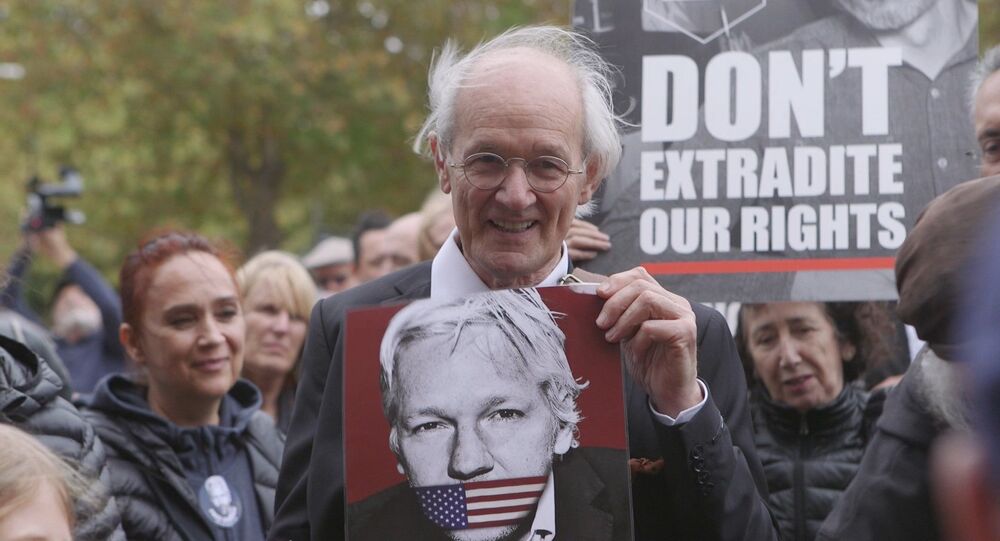 Filmmaker and journalist Pablo Navarrete followed John Shipton, the father of WikiLeaks founder Julian Assange, over a number of months as he campaigns to prevent his son from being extradited to the United States and secure his release from Britain's Belmarsh maximum-security prison.

Pablo Navarrete is a British-Chilean journalist and documentary filmmaker. He is the founder and co-editor of www.alborada.net which focuses on Latin American politics, media and culture, and is co-editor of Alborada Magazine. Mr Navarrete explained to Sputnik why he has made a new documentary called No Extradition, about WikiLeaks publisher and founder Julian Assange, his father John Shipton and their struggle to oppose Mr Assange's extradition to the United States.

Sputnik: Explain the premise of the film.

Pablo Navarrete: This documentary follows Julian Assange’s father John Shipton over the course of a few months starting in September 2019, as he joins the struggle to free his son from prison in the UK and prevent his extradition to the US where he faces up to 175 years in prison. It also features rallies in support of Assange from a number of key sites such as outside the Ecuadorian embassy in London (where Julian was a political asylee for around seven years) and Westminster Magistrates' Court in central London. There is a small group of dedicated supporters of Assange who, come rain or shine, have been there protesting Assange’s plight since the beginning.

Sputnik: Why did you decide to make this documentary?

Pablo Navarrete: Julian Assange's treatment by the UK government and possible extradition to the US to serve up to 175 years in prison for releasing information in the public interest, is one of the great injustices of our time. I hope this film can help spread awareness about the case. I think there are many people in the UK and around the world who are in denial about the fact that Julian Assange, a journalist, is political prisoner of the UK government. According to Nils Melzer, the UN Special Rapporteur on Torture, Assange has been subjected to torture by the UK and other states.

My mother, who arrived in the UK as a political refugee in the mid 70s and has been present at many of the Assange rallies, was herself a political prisoner under the Pinochet dictatorship in Chile. The difference between how the UK treated her and how it is now treating Assange could not be more different.

And after meeting Assange’s father John Shipton at rallies in support of his son in London (which I was covering for Telesur English) I decided I wanted to make a film about this issue. John Shipton is a gentle man with a lovely sense of humour, and his fierce dedication to secure his son’s freedom is something I felt I needed to portray. I also wanted to show some of the people at the forefront of the grassroots solidarity campaigns to free Assange, people like Emmy Butlin who features in the film. For me, there are many unsung heroes in the struggle to free Assange.

As a filmmaker I am drawn to covering the people and movements that are demonised, smeared and denigrated by the mainstream media and political class. The persecution of Julian Assange is emblematic of the decayed state of British democracy. The UK is a nation whose unaccountable elites are almost completely subjugated to the interests of successive US administrations. Arguably this subjugation has become even worse under Trump and Johnson. In my view, the fight for Julian Assange is also a fight to claw back some semblance of UK sovereignty.

Sputnik: What do you want people to take away after seeing this film?

Pablo Navarrete: I’d like people to get a sense of the injustice being perpetrated on Assange and how his father and others are fighting tooth and nail to prevent this from happening.

The British government goes to great lengths to talk about its commitment to media freedom and the security of journalists around the world. But this rhetoric is a sham, especially when one looks at how it has brutalised Julian Assange, breaking all manner of international laws.

The mainstream UK media have also shamefully looked the other way and joined in this character assassination. Only a select number of media outlets have covered the Assange case in a fair manner or attempted to put Assange and his family’s side of the story. The scene in the film where you interview Julian’s father is an example of this.

I think it’s important to remember that the persecution of Assange began before Trump and Johnson and at its root is a warning that those who dare to expose war crimes by the US and its allies will be hunted down. The significance for journalists in the UK and around the world is truly chilling.

As the UK/Iraqi hip hop artist Lowkey says in the film:

Sputnik: Where can people watch it?

Pablo Navarrete: The film will be shown for the first time on Thursday 13 August. Then again on Saturday 15 August. Both of these screening will be followed by Q&As with me, Assange’s father John and others. We are in the process of setting up more screenings and the film will also have subtitles in languages such as Spanish, soon. You can also go to www.noextraditionfilm.com for more info and check out my film's Twitter handle at @noextradfilm.