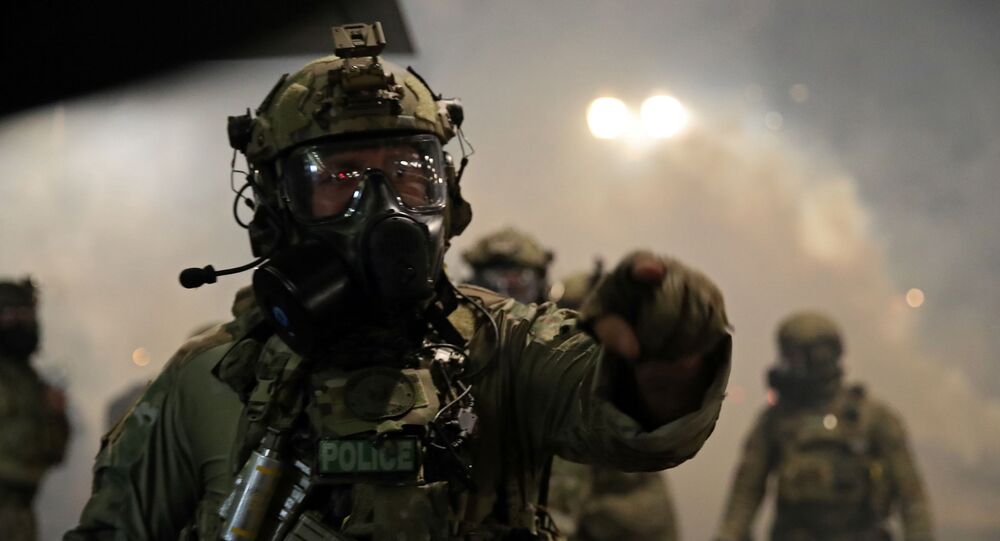 The heavy-handed repression by federal police and the keeping of dossiers on journalists covering them is part of the vision US President Donald Trump has laid out for the US - and it’s strangely reminiscent of the final years of apartheid South Africa, a journalist and activist told Sputnik Friday.

After federal police deployed to Portland, Oregon, were ordered to step aside on Thursday, the protests they were sent to crush did not turn more violent, as Trump predicted, but instead were very peaceful, even as the demonstrations moved closer to the Hatfield federal courthouse Trump maintained was in such danger.

Within the next day, the slew of federal police agencies deployed to Portland are expected to begin withdrawing as Oregon State Police take over policing the demonstrations. Instead, Trump has said he is sending them to Cleveland, Ohio, and he has threatened more than a dozen other cities with the same treatment.

Eugene Puryear, an author, activist and host of BreakThrough News, told Radio Sputnik’s Loud and Clear Friday that “it seems that the Trump administration is bound and determined to try to recreate the same situation that they had in Portland.”

“I think really what we’ve seen happen in Portland is that they weren’t able to succeed with their goal of ‘crushing the movement’ or whatever they were claiming they were doing - keeping order, or whatever it may be. Now they’re withdrawing, tail between their legs, trying to replace federal troops with state police and then moving on to other cities where I think they will try to find some way ... to morph the way they’re deployed to be more about ‘violent crime.’”

Puryear said there were a few ways federal police could try to push the Trump administration’s agenda in their new deployments.

One way is “to give the perception that these places are totally out of control,” he said, “which in and of itself is wrong, but on top of that, that he is on top of the law and order element of it, and that if you want peace, if you want stability, if want, you know, just happiness and rainbows, I guess, that Donald Trump is your guy, and that if anybody tries to stand in the way with that, they will be crushed with overwhelming force.”

“I think in some cities they might try to deploy in the same type of way against the protests, but I think what they’ve found and what they’ve seen is that that, essentially, was a failed strategy. It made more people come out, more people protest, and in Portland in and of itself, you could see that the federal sort of thug tactics were becoming less and less effective as the protesters learned what they were,” he said.

“I think we will see more federal forces in our streets one way or another as part of Trump’s - I mean on the one hand it’s a campaign ploy, but also sort of what he believes the country should be, which is this highly authoritarian type of situation, where the police and the military are used against the people of the country,” he said.

Local Police ‘Want to Use the Same Tactics’

Many mayors across the country have come out with statements saying they will oppose the deployment of federal police to their cities. However, Puryear told host John Kiriakou that while mayors can’t stop those deployments, “it is possible that the mayors or really the district attorneys, that they could have some of these officers arrested.”

“Certainly the federal officers have a certain remit in which they can operate within, but like any other individual - and I think this is something we forget, because we see the police never held accountable for anything - is police officers are not above the law. To the extent that the top legal officers of these cities, in conjunction with the leadership, feel that the actions of these federal agents are beyond the legal remit, they can, in fact, arrest them, and they can, in fact, charge them,” Puryear said.

“I think many people will be afraid to do that. I think it’s unclear - I think only Philadelphia has said that they’d be willing to even entertain that. So we’ll see if it happens, but I think it’s very clear that a lot of these mayors who are talking about how much they think it’s terrible and how much they hate it are also showing their own cowardice in a way, because they’re saying they’re standing up for people, but they’re not standing up for their own residents by enforcing the law. And I think many of the things we have seen are certainly legally dubious, certainly in Portland and in other areas.”

“And I think a lot of it comes down to the fact that - and I think we’re seeing this also in Portland, but we’ve seen it in Chicago and other places - many of these local police agencies want to be able to do the same things that the federal cops are doing, but they want to be able to do it themselves and on their own time. So I think they’re worried that excessively criminalizing it, or even really referring to it as a criminal act as opposed to Trump’s overreach, will actually put them in a box that will make it more difficult for them to deploy similar sorts of messes.”

Puryear recalled that Chicago police maintained their own “CIA-style black site” in a facility on Homan Square. In addition, the officers behind the widely decried “kidnapping” of a trans woman protesting in New York City earlier this week worked for the New York Police Department, not a federal agency.

Puryear warned that incidents such as the recently revealed Department of Homeland Security dossiers on journalists reporting on the Portland repression are part of a “steadily increasing war against journalism, essentially.”

“Obviously [former US President Barack] Obama didn’t get rapped with it as hard as Trump has gotten rapped with it, but I mean, the issue of the Fox News journalist, and the State Department, and all of their hunts for leakers and all these different pieces. We all know quite well - you better than most - how the [George W.] Bush administration went out of their way to criminalize most whistleblowers and certainly scare and intimidate journalists into not reporting on national security.”

“I think the Trump administration is the logical conclusion of this post-9/11 security state that we put forward where many of the things that were denounced in the Church [Committee] of the 1970s were simply just reheated and given a new legal framework under the guise of counterterrorism. And as I think many of us have warned for years, there was no way this wasn’t going to start to leech into the domestic scene,” he said.

“It reminds me, more than any other state, of apartheid South Africa,” Puryear said. “Especially towards the end, where almost all of their intelligence apparatus, under the guise of fighting an outside threat - i.e. communism, the ANC [African National Congress] - was ultimately turned inwardly on the opposition to the apartheid state. There was heavy criminalization of journalists, heavy criminalization of the clergy, of political activists, and it really feels to me that this is a very similar situation, where under the guise of outside threats we see more and more the security apparatus of the state being used against unrest here in this country and anyone who is looking to report on that in a truthful way.”

However, Puryear cautioned that things won’t change much if Joe Biden defeats Trump in the November election, noting that “on the most basic level, Joe Biden has not actually said that he wants to change anything in the way the national security state is organized” and adding that Biden’s response to the protests in Portland “is very similar to Trump, even though he’s trying to give it a very different accent.”