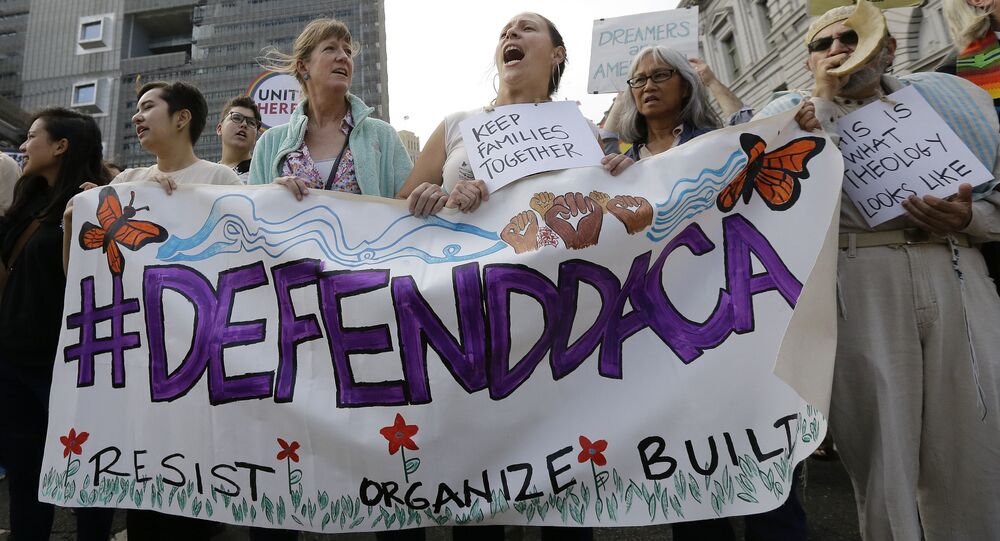 The Trump administration on Tuesday announced that it will continue to reject new applications for the Deferred Action for Childhood Arrivals (DACA) program, a move that is most likely an attempt to appeal to the president’s nativist base, Juan Carlos Ruiz, co-founder of the New Sanctuary Movement, told Radio Sputnik’s Loud & Clear Wednesday.

The immigration policy dates to the previous Barack Obama administration and allows “Dreamers” - or young, undocumented individuals who arrived in the US as children - to be given work permits and a renewable, two-year period of deferred action for deportation. Democratic lawmakers tried and failed several times to codify the policy in law as the Development, Relief, and Education for Alien Minors (DREAM) Act - hence the name - but in 2012 the Obama administration adopted some of the bill’s principles for its own DACA program.

The government’s latest attempt to wind down legal protections for immigrants, shortening DACA renewals to one year and declining new applications, comes after the Supreme Court ruled in June that US President Donald Trump’s administration acted in an “arbitrary and capricious” manner in attempting to end the program.

“Right from the beginning, this administration has characterized itself for bullying people and going after the most vulnerable people, and mostly immigrants, people of color - they have really felt the consequences … I think his [Trump’s] complete disregard of the law really makes him fascist,” Ruiz told host John Kiriakou.

“We have to look at his whole history as the head of this administration, and basically he has a complete disregard of the law. And this once again, it is an attempt to do that, it is unconstitutional. The Supreme Court basically said that he has to follow what’s already in place - that it is unlawful for him to do otherwise - and he knows that, but the harm is already done,” Ruiz noted.

“This complete disregard of the law, it’s a danger, because it does in fact terrorize our communities, put our communities in harm’s way … This is to appeal to his radical base,” Ruiz added.

Many immigration advocates are voicing concern over the Trump administration’s new obstacle for DACA applicants.

"In my opinion, they're blatantly ignoring the Supreme Court's decision," said Melissa Lopez, the executive director of Diocesan Migrant & Refugee Services Inc. in El Paso, Texas. "There is a proper procedure that can be followed to terminate the DACA program, but up until that procedure is followed completely and as required by law, these applications should be accepted."

"The reduction of the program by the administration will disqualify some DACA beneficiaries who have participated in the program for years," said Beth Werlin, executive director of the American Immigration Council, NBC News reported. "Some Dreamers will be forced to become unemployed, including some who are at the forefront of our fight against the coronavirus."

According to Ruiz, the US must spend less money on the military and more on establishing a humane immigration policy.

“To have any kind of policy, we do need to take on the demand and the cry for justice in terms of defunding not only the police but the military. The military, unfortunately, has been wedded to the immigration system. Just the new deal that they are trying to pass in terms of aid with the stimulus that is running out, you know, for the unemployed people, over 60 million people or so in the country that are receiving unemployment benefits, there is something attached to the military budget … Trump has redirected some of those funds to build the [border] wall. Now, they want to gain it back, and it’s part of the budget now,” Ruiz noted, pointing out that the US must look at what it truly needs to pay for, especially amid the COVID-19 crisis.

“That will have a concrete impact on how we are thinking of implementing a more humane immigration policy,” Ruiz added.

Will Trump Find a Way Out After Being Cornered By Supreme & Federal Courts Over DACA?