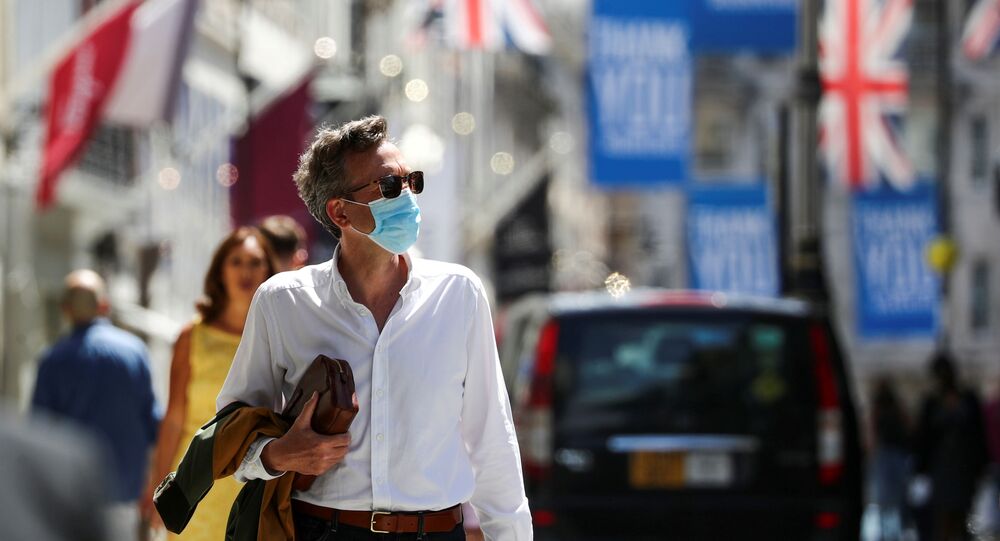 Is Europe on Verge of Second Wave of Coronavirus?

BRUSSEL (Sputnik), Luc Rivet - Europe, which has managed to bring the first wave of the coronavirus pandemic down to a trickle of controlled clusters, fears a second wave, as there is a tendency among the population of European countries to relax and stop following restrictions, though the virus is still present.

All over Europe, governments are deciding to strengthen the compulsory nature of the mask, which must be worn at all times, even in the street, or face a fine. Restrictions have also been taken locally and sporadically, such as limiting the number of people who can meet or banning visits to retirement homes.

"The epidemic is still present. People have a tendency to relax and stop applying the distancing measures, but the virus is still there, and the epidemic could flare up very rapidly. We see now, for example, a worrying situation in the [Belgian] city of Antwerpen, where the reproduction rate is 2 new cases for each infected person. We should actually remain below 1 to 1, so all alarms bells are on in Belgium, because the epidemic is already spreading outside the original cluster in Antwerpen", virologist and member of the COVID Security Council in Belgium Marc Van Ranst said.

The alarm bells started ringing in Europe in the middle of July, with Spain's Catalonia hit by a resurgence in Lleida, a city in the region's western area of Segria. It rapidly spread to not only Barcelona but also to Zaragoza in northeastern Spain. Within the context, on 17 July, the Catalan regional government urged some four million people – including all residents of Barcelona – to stay at home and avoid gatherings of more than 10 people.

Since then, the situation has worsened in other parts of the country at the same pace as on the first days of the first crisis in January-February. In a bid to remain a tourist destination this summer, the country's authorities have reacted quickly to reassure that Spain is a safe country. Though Spain, like other European countries, has new clusters of the coronavirus, it is making great efforts to control these outbreaks. According to Foreign Minister Arancha Gonzalez Laya, the situation in under control and the clusters have been detected and localised in a timely manner.

© REUTERS / Brian Snyder
‘Important Milestone’: US Firm Begins 30,000-Person Trial of COVID-19 Vaccine
Despite the fact that Spain proclaims to be a safe tourist destination, the United Kingdom has decided to reinstate a mandatory two-week quarantine for Spanish arrivals, which is causing controversy among holidaymakers. The same happens in Norway, that was one of the first European countries to reestablish flights between Oslo and the main Spanish tourist destinations. Meanwhile, French Prime Minister Jean Castex recommended earlier in July to the French "to avoid traveling to Catalonia," adding that Paris also asked the Catalan authorities to reduce traffic from the region into France.

Meanwhile, the central Spanish government, which ensures that this is not a second wave, considers that the regions have sufficient tools to control the epidemic and rule out the possibility of a new general state of alert, leading to general confinement.

What is the Source of the Spread of COVID-19?

The question regularly put to epidemiologists and politicians, is who is responsible for the further spreading of the coronavirus, with family reunions being now authorised with a participation of 10 to 15 people, as well as marriage parties and careful visits to very old citizens in retirement houses.

According to Michel Dupuis, a philosopher at Belgium’s UCLouvain University, who closely follows the pandemic, these family reunions are a source of transmission, as many people, who are asymptomatic carriers of the virus, can infect others during such meetings.

"In fact, the authorities, the countries find themselves in a situation of conflict of interest. This is the 'algorithm' for the situation: lock everyone up, preferably sedated to say it with humour? Or think first of the economy and the need to decompress in this holiday season? The pacifying social effect is a necessity. The situation is very specific and it will become more radical in the coming weeks, with an intensification of the conflict of interest. Is it public health that will lose? Is it the economy and tourism? Hard to say today", Dupuis said.

Regarding the disinterest of young people aged between 16-39 years old in the measures to be taken, it is a question of human maturity, the philosopher said, adding that this group of people believe they are invincible, as they have never faced the risks of life and have no experience of disaster or war.

"It is also a question of collective responsibility. The lethal prospect in AIDS was obvious; here [it is] not. You can just catch COVID-19 by flirting. Governments must finely optimise their interventions: police checks but not brutal or they risk a riot. Laxity is not an option either. You need to tighten the screw, but not too much so that it does not break", Dupuis added.

In addition, the philosopher said that youngsters were badly informed and they would not be influenced by sermons. According to Dupuis, more brutal communication on social networks showing real cases can be part of the solution. It can be pictures printed on cigarette packs to scare youngsters in adopting restrictive measures imposed on the population.

"They should adopt anyway the new staccato style, use ‘influencers’ to convey the message, be creative to reach the young … People do mingle, and the blame game is on, of course: blaming tourists coming from infected regions, careless youngsters, bi-nationals coming back from their country, etc", Dupuis noted.

What Measures Can Change the Situation?

Europe is relatively closed to travellers from abroad or should be, with tests performed in airports upon arrival or before departure. Given that the Schengen zone countries, and Europe at large are on average at the same level of control of the pandemic, borders were opened, but tourism and the crisscrossing it implies more contaminations, difficult to trace abroad.

"It is true that the contacts of tourists at their place of vacation, for example, in a discotheque, are multiple and from many different countries. This complicates the tracing. The strategy that should be developed is to test massively, on a large scale and quickly in the areas identified as being new clusters in the process of formation. If the public agrees, there will not be a need for much re-containment. Partying is as dangerous in Antwerpen, Belgium, as it is in Barcelona, ​​Spain", Jean Ruelle, a virologist and researcher at the UCLouvain experimental research institute, said.

According to the specialist, the relative homogeneity of COVID-19 situations in the Schengen zone, where crossings from one country to another are carried out without control, and even beyond for all EU member countries, means that it should not be necessary to re-confine, except locally. As for travellers coming from outside the EU, they must fill out a form, containing the information even about their seat on the plane, to help identify other possible COVID-19 patients in case of the onset of the disease.

"For travellers coming from outside the EU, they must fill out a form giving even their seat on the plane, to help identify other possible patients in the event of the onset of the disease. No new test necessarily but self-isolation with address on the form provided", Ruelle added.

The virologist also noted that only in this case Europe can maintain the level of contamination of one person for each patient and curb the pandemic, while scientists are trying to develop vaccines.