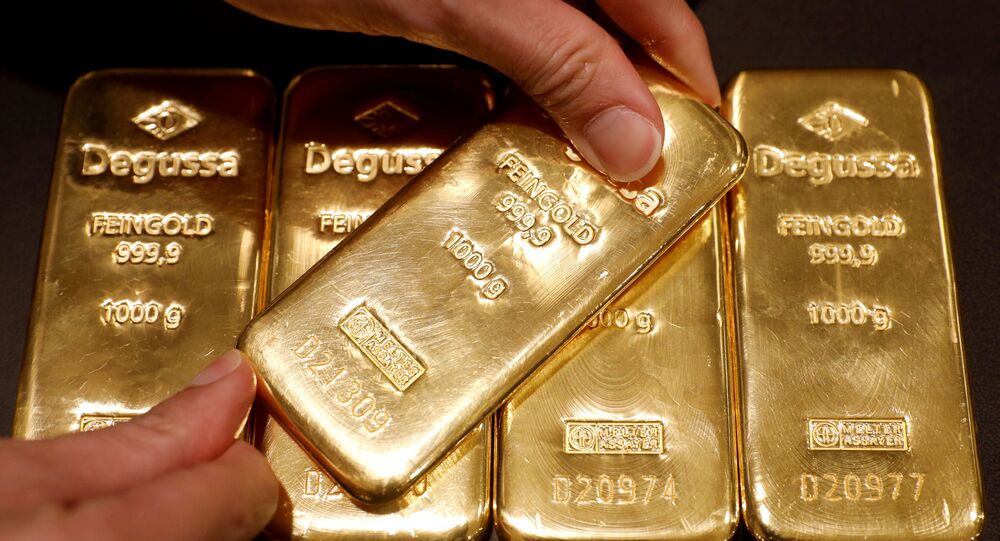 The emergence of the coronavirus pandemic has sent global markets into tailspin leaving only a small area of safe havens for investors. And this time it appears dollar assets are not among their top picks.

As gold prices continue to rise to new heights, global financial moguls once again proved to be correct in their practice of packing portfolios with the precious metal in April. Last Friday, gold set a new record high, trading at $1,900.6 per ounce and is now creeping towards surpassing the historic high, adjusted for inflation, of $2,246 per ounce.

Even now with prices at their peak, investors are not giving up on the precious metal and as Bloomberg notes in an article, the "smart money of sovereign funds and central banks" do favour gold over good performing stocks, including those on the American market. Sputnik contributor and financial analyst Ivan Danilov, indicates that even American banks such as JPMorgan and Goldman Sachs are advising their clients to buy gold instead of "greenbacks", and global central banks are also planning to build up gold reserves, something that the Russian CB has been doing since 2018.

"In light of this, the statements by some experts that gold and other precious metals can no longer be considered protective assets and that Russia is in a terrible position right now due to stockpiling gold in reserves and ignoring dollar-denominated instruments […] look quite odd", Danilov says.

The analyst lays out several possible explanations for the new trend: from investors' exodus from other assents due to coronavirus fears to concerns over global political risks, which have historically driven investors towards the precious metal. And a major political risk is now coming from what has often been seen as a traditional safe haven, Danilov says, pointing to the United States.

The current turbulence on global markets has one distinguishing feature setting it apart from past fiscal crises – dollar assets are no longer a go-to option for those seeking safe harbour, Danilov stresses. He points out that right now the greenback is at the "COVID-19 bottom or near it" in terms of how it's trading with other global currencies. US media outlets put this down to the government's poor response to the pandemic, but this explanation is insufficient, the analyst argues.

Danilov believes it is a lack of domestic political stability undermining the position of American assets. The US is currently undergoing a "low-intensity civil war" as the federal government deploys forces to states to bring about order there, but the clashes might intensify or even turn bloody after the November election, the analyst says. He concludes that investors' turn towards gold instead of the "dollar" looks like a wise decision in the face of such grim prospects.