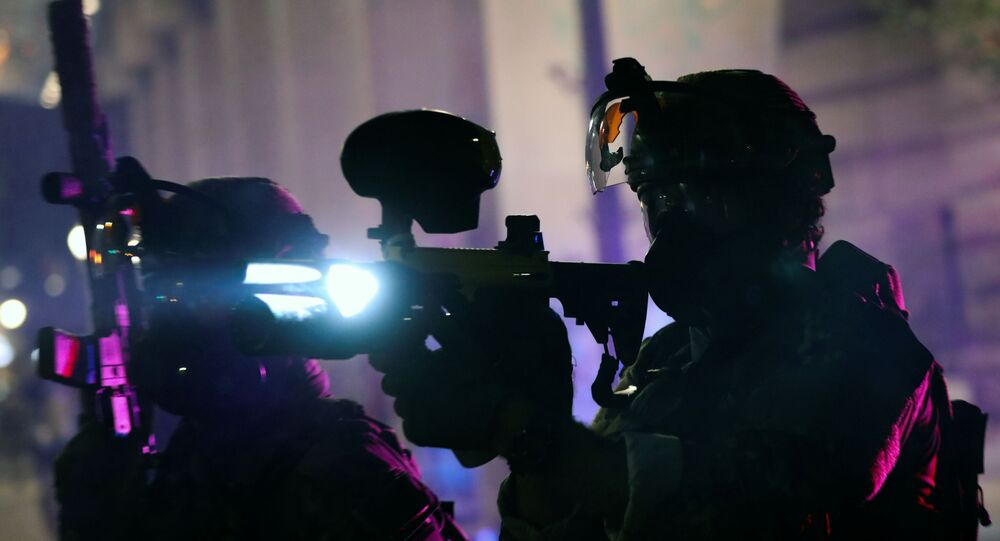 Tensions are continuing to grow between Donald Trump and Democratic local politicians as the president has announced that federal law enforcement agents would be sent to cities facing violence amid protests over George Floyd's killing. US observers have discussed whether the deployment of feds in the Democratic-led cities is the right thing to do.

On Wednesday, President Trump and Attorney General William Barr signalled that the FBI, ATF, DEA, US Marshals Service, and Homeland Security agents would be sent into Chicago and Albuquerque, New Mexico, as part of the feds' Operation LeGend, aimed at tackling rising crime across the country.

"Today, I’m announcing a surge of federal law enforcement into American communities plagued by violent crime," the president told the press, citing the upsurge in gun violence in New York City, Philadelphia, Minneapolis, and Chicago amid nationwide protests over the killing of black ex-convict George Floyd in police custody.

Wheeler is 'Responsible for the Mess' in Portland

Trump's statement came on the heels of a row in Portland, Oregon, where, according to the local government, the Customs and Border Protection (CBP) units of the Department of Homeland Security (DHS) had been spotted grabbing protesters in the streets and taking them away in unmarked vans.

Portland resembles a city under siege and has continued to be ransacked long after most other US cities have calmed down, highlights Ethan Ralph, political commentator and founder of a website, The Ralph Retort. According to him, Portland Mayor Ted Wheeler, who earlier demanded that the Trump administration remove the feds from the city, is 100% responsible for the mess.

Rioters carrying shields rush back to the Portland federal courthouse after law enforcement return inside. Rioters cheer and celebrate, claiming it to be a battle victory. #PortlandRiots #antifa pic.twitter.com/UORcZiuOBW

​Having rejected the claims that "unidentified" agents "kidnapped" Portland protesters, acting Secretary Homeland Security Chad Wolf specified that the troops had insignia showing they were "police" and that they detained demonstrators on probable cause of destroying federal property. Wolf denounced the local government's apparent unwillingness to bring an end to violence in the city, listing multiple instances of rioters inflicting damage on federal facilities and agents.

According to the city's law enforcement authorities, downtown businesses faced around $23 million in damages and loss of customers due to local protests, which have occurred night after night for nearly two months.

"I think the mayor is the one playing politics by posturing and prancing around in front of the cameras, as he did last night when he visited the protest scene itself", Ralph highlights. "He got berated for his troubles, which says all you need to say about the Wheeler approach."

Wheeler made an appearance near the courthouse on late Wednesday, trying to rally demonstrators and saying that he came to support their cause against the Trump administration's "occupation" of Portland. In what appears to be an accident, the mayor was tear gassed by federal agents and left the site.

.@tedwheeler says, “I saw nothing that provoked this response” when asked about his thoughts on federal law enforcement deploying tear gas.

The building had been set on fire and rioters were throwing explosives. #PortlandRiots pic.twitter.com/M21iOcDfLa

​"Mayor Ted Wheeler joined the demonstrators only to be told he should step down. He was booed, according to published reports," notes Dave Workman, the editor-in-chief of TheGunMag.com.

Protests Still Raging on in Seattle

Though the US left-leaning mainstream media and Democratic officials are spreading the narrative that the protesters targeted by the feds were "peaceful", in truth those arrested "are far from peaceful, instead repeatedly attacking federal property", highlights Paul Valone, a political commentator and executive director of Rights Watch International.

"Equally ridiculous is the accusation that President Trump is targeting Democrat-led cities in the interest of politics," the political commentator notes. "Metaphorically speaking, one dispatches the fire department to the location of the fire."

He draws attention to the fact that extended riots are occurring only in Democrat-led cities "because only Democrat leaders refuse to enforce laws prohibiting them".

In early June, Seattle Mayor Jenny Durkan allowed protesters to create an "autonomous zone" free from police in the city's Capitol Hill neighbourhood. A few weeks later, the mayor moved to end the so-called Capitol Hill Organized Protest (CHOP) zone following a rise in gun violence. Although CHOP was dismantled by 2-3 July, protests and violent clashes with the police continued.

​"In the Pacific Northwest, the two continuing trouble spots are Portland, Oregon and Seattle, Washington, where demonstrations have continued daily for nearly two months", elaborates Dave Workman. "In Seattle, a small riot broke out in the city’s Capitol Hill neighbourhood Wednesday night, with vandalism, looting and an attempted arson."

​The journalist observes that municipal police in both Portland and Seattle "have been reluctant to get seriously combative", suggesting that apparently therefore federal law enforcement had to step in to protect federal government buildings in Portland.

'Trump Should Have Waited Until Chicago Invites Him'

However, some observers argue that there's no need to dispatching federal troops to the cities.

"From where I live – Hyde Park – the situation is rather normal", says Paul Poast, an associate professor in the Department of Political Science at the University of Chicago. "No exceptional increase in crime and violence. However, in the South to Southwest portions of the city, which are traditionally the areas of the city hit hardest by crime, there has been an increase in violence. Does the increase merit sending in federal agents? No."

The academic believes federal agents are being sent in so that Trump can double down on his claim that he’s a law-and-order president.

"President Donald Trump and Attorney General Barr are on the wrong side of the constitutional issue and regarding this so-called project or operation legend in the committing of federal troops into Chicago without invitation," opines Mark Dankof, a US investigative journalist.

The president had to wait until state governments requested his help to sort things out, Dankof believes, suggesting that it would be right both constitutionally and politically.

"That's the thing to do, Mr. Trump. Don't intervene in these situations where you haven't been invited. Let Miss Lightfoot in Chicago figure out what to do as her communities keep burning. As you have all of this black on black violence that's taking place that she doesn't want to reference in terms of statistics. Just do the right thing constitutionally. Do the right thing politically. Let them go absolutely to hell until you're invited," the journalist says.

On Tuesday, a group of human rights activists including the Western States Center, the First Unitarian Church of Portland, two state representatives and an ACLU legal observer, filed a lawsuit against the federal government over its law enforcement activities in Portland. The activists followed the suit of Attorney General of Oregon Ellen F. Rosenblum, who sued the federal government on 19 July over allegedly unlawful detainment of protesters.

​Meanwhile, in an apparent change of heart, Mayor Lori Lightfoot agreed that federal agents would be sent to the city to join existing operations to curb increasing crime, though previously she pledged to turn the feds away. Lightfoot and Trump discussed the expansion of Operation LeGend to Chicago on Wednesday.

Chicago Mayor Lori Lightfoot agreed to let feds into Chicago. So this is the scene outside her house tonight.

​“Mayor Lightfoot maintains that all resources will be investigatory in nature and be coordinated through the US Attorney’s office", the mayor's office stated on 22 July.